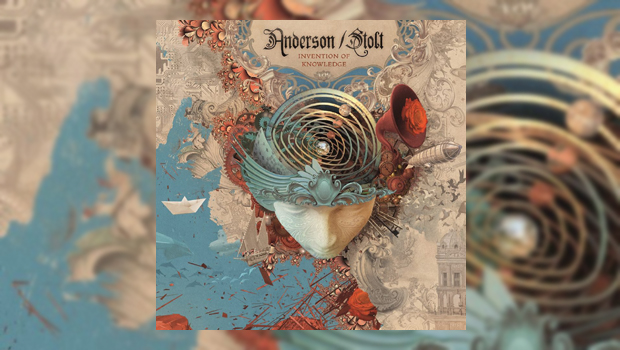 The coming together of two greats of progressive music, Jon Anderson and Roine Stolt, for this their album Invention of Knowledge has stirred up a storm of anticipation across the progressive rock fan base. This is supported by social media which is awash with mostly positive comments regarding this project; it appears that this is being well received.

I was personally unsure what to expect from this release and although it is beautifully written and played, I am not sure that it offers anything new. That said, after several listens I do really like it. What it gives the listener is a perfect lesson and a homage to seventies progressive rock sounds but with a modern production.

The foundation of this relationship goes back to Transatlantic’s appearance on the Progressive Nation at Sea cruise where Jon was invited to play with them as a surprise guest. Originally planned as a twenty minute set, all that changed when Jon suggested they do Revealing Science of God from Tales From Topographic Oceans. After a lot of practice they pulled it off well. This was the first time Jon and Roine had met and they got on well, forging an instant connection. From here they began to exchange ideas, and the foundations of the music began to take shape via the internet. It was decided that there were not going to be any rules, they would just draw on their inspirations in a similar way that those pioneer bands of the seventies did. They both felt that it was best to remain in recognisable territory, and doing something new wasn’t what either really wanted to do.

The recording process began with Roine going into the studio with three old friends about a year ago to record the basic tracks. Roine had chosen to work with The Flower Kings duo of Jonas Reingold on bass and Felix Lehrmann on drums along with keyboardist Tom Brislin, who played on Yes’ Symphonic tour in 2001. Other well known faces also provide musical contributions, as noted in the ‘Musicians’ list below. The album was co-produced by Jon and Roine and consists of four long-form pieces, reminiscent of Topographic Oceans; of these four songs, three are constructed as suites and the last is 11-minutes long.

The music they both have written here is both melodic and atmospheric with great vocal harmonies, all played superbly by musicians at the top of their game. The vibe is positive and uplifting and there is a definite “Yes” sound, you can hear the influences throughout, in particular Topographic Oceans‘ styling to some of the vocal structures. There are some Flower King influences also.

Now for the elephant in the room; we all know what a wonderful singer Jon is but his lyrics do have that “hippy” feel that some may find testing. I have approached these from the angle of how well they fit the music, and as a whole they do. I have tried to hear Jon’s voice as an instrument, allowing the words to flow without putting too much emphasis on the meaning. To be fair to Jon, his lyrics do often have a strong spiritual, mystical and positive feel to them, with references to love, kindness and a positive outlook for our world (and these days maybe that is not a bad thing); this is to be expected as he is truly passionate about these emotions. Throughout, Roine’s guitar work shines, occasionally adding a Flower Kings shine to the solos to counter the overall “Yes” sound, while at times his runs channel Steve Howe, but it all seems to work. On Everyone Heals Roine gives us one of his most beautiful solos, which is followed by a lovely piano solo.

The first song, Invention of Knowledge, comes in at around 23-minutes, it is a beautiful piece but does start to meander towards the end and could have benefited from a little judicious editing. The first part, Invention, has obvious shades of Topographic Oceans to my aged ears, but there also appears to be some Jon and Vangelis influence too; as this part comes to a close there is some great eastern influenced guitar.

The closing song more or less covers all that has gone before, encompassing it into one song. There are times here where the keyboards have an almost Rick Wakeman style to them.

Overall, I have found Invention of Knowledge to be a very enjoyable album. As I have said, it does not offer anything new or ground-breaking, but that is not a bad thing in this case. It is probably a better album than anything from Yes’ recent output, and although it does lack some dynamic change it is an object lesson in how to play music with its roots firmly in the seventies whilst making it sound modern. I believe that this album is one that will shine on vinyl, each suite taking up a side, the act of getting up to turn over creating a more definite distinction between tracks.

Invention of Knowledge is available as a Special Edition CD Digipack, 180g Gatefold 2LP (including the album on CD) and Digital Download.