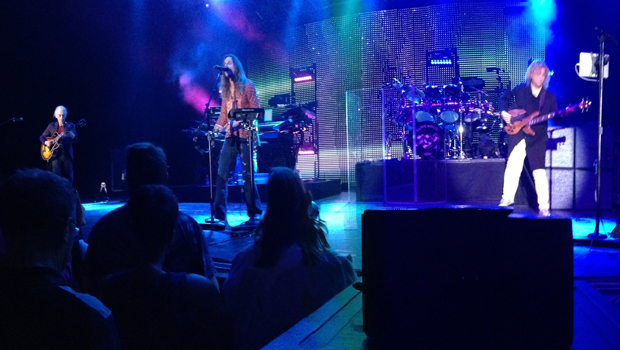 Well, not quite as Close To The Edge as I would have liked to my accommodation, but a 3.7 mile trek from the jungle of buildings that constitute Florence; it is hot, it is sticky, and…oh, what the heck, I booked a taxi to the gig. First impressions, what a lovely venue. On the exterior fairly nondescript, but internally very, very nice with the cleanest and nicest toilets ever at a venue!

The following night would see Yes end their tour in Rome, but tonight Firenze. Feedback from earlier gigs on the tour has been good, and tonight my expectations are high. Dragged kicking and screaming to the gig are my wife (no prog) and 13 year old bass and guitar playing son so I’m interested to see what they will think?

Drama came out on the 18th August 1982. There was a lot of furore around it and the die-hard Yes fans were in many cases already anti. I bought it, I liked it, but acknowledged it was very different from previous albums. Yes with the Buggles?? How dare they! It was different – a non-Jon Anderson album – and it remains one of my personal favourites. 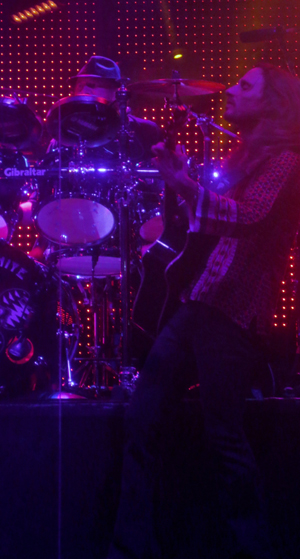 Traditionally, Yes enter stage right to Stravinsky’s Firebird Suite. It is still there but for this tour, by way of paying respect to Chris Squire, the first piece of music heard is Onward from Tormato; the recorded version of the bass led ballad with Jon Anderson on vocals. Played on a darkened stage with a single spotlight focused on Chris’ white bass, it is quite an emotional event. Respects paid, The Firebird and the band enter, coincidently stage right. Keyboards swirl, bass sounds and Machine Messiah opens the proceedings for the evening. Instrumental perfection, like the album but with enough of that warmth from a live performance that stops it being clinical; Jon Davison starts, and so does my first hearing of him rather than Mr Anderson. He seems a little hesitant at first, but that is all dismissed by the end of the first number.

Man in a White Car, written about Trevor Horn and his white Corvette Stingray, and JD’s voice has found its measure. If there is a song to highlight the difference between JD and JA then this is possibly it. Jon is not JA, and makes no attempt to be so, his high is slightly lower, but he sings this well, and deserves praise for it. I stop thinking JA and just enjoy JD’s performance.

Alan White, be hatted, tightly controls the drums at the back, though from my position the first true sighting comes at the end of the show. Any attempt by me to take a decent photograph is slapped down by the Italian Keith Allen lookalike security guard. “No photos, it’s for professionals!” Dutifully noted the SLR is returned to the rucksack, I wonder what he would have made of the sketch pad. 2B or not 2B! Photo pass please, though a few pictures were sneaked from row Y by Mrs C – woa betide any security crossing her. Not bad for an iPhone. She reported at the interval, no interventions occurred.

Into The Lens was written by Trevor Horn and Geoff Downes, as The Buggles and for The Buggles, but first released on Drama. It appeared again as I Am A Camera on The Buggles 1981 album Adventures in Modern Recording. Through the interpretation of Billy Sherwood’s bass it sustains its right to exist now; Drama, when put in its historical perspective, is the precursor for 90125. Steve Howe provides added effects on slide guitar on a practical rig which does bear a slight resemblance to a zimmer frame on wheels, which having said, Steve is far more agile than you might expect from a man who has been in the music industry for as long as he has. My son is impressed, both with Steve and Billy – well done guys, it is damned hard to impress a teenager, you have added to his musical aspirations to the point where he frequented Florentine music stores without prompting. Oh dear, more expense. 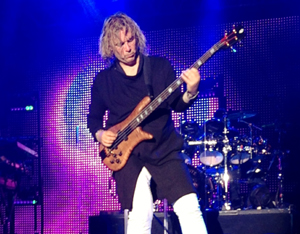 Steve switches between guitar set ups, and we move on; Drama is quite a bass led album to my ears, and Sir Billy of Sherwood further demonstrates his bass ability, still the intense concentration but perhaps that is just his way, as he struts to the rhythm and beat first on Run Through The Light and then Tempus Fugit. Time does indeed fly as Drama concludes and we are treated to another musical tribute in the form of Time & A Word (My wife’s favourite from the first set) and followed by Siberian Khatru; old Yes with JA’s words, strange and beautiful, the former dedicated by Steve to the memory of Peter Banks as an image is displayed on the backdrop.

Intermission, a chance to look around my environment; the audience is packed, Teatro ObiHall is Firenze’s new venue on the banks of the Arno. The sound is crystal clear, whether you are at the front or back in Row Y. I am in row B, this is the front row, as an Italian explains to me this is normal. When you look at it you wonder, why couldn’t we have a few of these scattered around the country?

I use the lull to explain to Ben, my son, a little of the Yes history although the first set is not quite his thing. It is alright, he says, and he enjoyed some parts. I am surprised as I would have thought the ’80s tinged music closer to the material he likes today – but what do Dad’s know? The audience is mixed and predominantly of a certain age, a number sporting pony tails from receding hairlines. Who cares, if that’s who you are, then go with it. The ladies, rock chicks dressed in denim and the occasional leather trouser, languages again mixed but a number of English voices are heard. Whilst outside in the world national identity is argued and debated, inside the auditorium we are one. There is lot that music can teach us.

Set two, Going for the One, the title track of my first Yes album, the one with the man’s bum on the front. I wonder what he looks like now. Has it all begun to sag? After the tight control of eighties Drama the music feels a little looser, free and despite the fact that these are the hits, the response from the audience I felt was rather muted; this was a shame as Going… and Owner of a Lonely Heart are actually great songs, even if they do lean towards the pop spectrum. Jon Davison, still to my eyes bearing a resemblance to a long haired Robert Carlyle, handles both of these Anderson vehicles with aplomb. Sorry if I ever doubted you Jon. 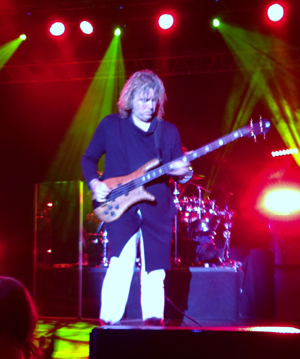 In my distant youth Fragile passed me by. I was Genesis through and through and my divergence from the righteous path was infrequent. Shame on me, so for the past few weeks I have been acquainting myself with the album. Why did I miss it? Much to do with the limited number of albums a paper round could purchase. There is a greater love for this than Drama, perhaps it is the age of the audience, I don’t know, each album has its place in the Yes chronology. The opening notes of Roundabout illicit applause, I can hear members of the audience singing along, and to my left, aged 13, a foot is actually tapping. I reserve myself a little inward smile; “That’s my boy!”. It feels fresh, the nature of the songs more open than Drama, the audience more familiar and welcoming to the music as well. Again played as an album in its entirety, Geoff Downes provides us with a virtuoso performance of Cans & Brahms, no cape required. Then we do Have Heaven; bass solos, keyboard solo, guitar breaks and vocals, every piece is now greeted with rapturous applause.

I said earlier that I questioned Jon’s vocals, in part this is due to not being overly fond of Heaven & Earth, and again I say I was wrong. To those voices that say the current line-up is a tribute act, you are wrong. Yes and its personnel have always been complicated, if you read through the history, not always the best of friends, but this Yes holds up against them, and I hope the next album will show that they have their place in the timeline. Billy Sherwood, face puller extraordinaire, is a good fit for Chris, I cannot say replacement or substitute, but with the next Yes I feel sure he will stamp his own authority on the bass whilst still keeping an essence of Chris Squire.

South Side of the Sky is wonderful leading on as it does into the believed impossible Five Percent for Nothing. It works. Long Distance Runaround brings Jon centre stage again, and I think I detect a few key changes to accommodate the differences between the two Jon’s, but it is beautifully performed, the song also bringing the solo contribution from the man in the shadows (and hat), Alan White, demonstrating that he is not just the man in the dark. Billy The Fish was a character in Viz, but this is Billy performing The Fish (Schindleria Praematurus), my proto bass player in enrapt, leaning forward in his seat for a closer look. Billy is loose, nods and grins are exchanged as the man in the white trousers shows us the range of his bass ability, working tightly with Alan as drum and bass often do. Symbiosis.

The stage goes quiet, a spotlight shines, and into the light steps Steve Howe to perform Mood for a Day. It was a very good mood, applause dying down in the now dark Florentine night we head into Heart of the Sunrise, the smiles on the stage match those of the audience as the instrumental interplay controls the proceedings. The lights come up, the band bow, only to return for the inevitable encore, “Sister Bluebird” sung as Starship Trooper begins, the true trooper, and not Paul Verhoeven’s Sci-fi film; the audience rise to their feet, photographs are taken and the Italian Keith Allen security retreats under the impossible wave, a side show as the multitude of phones and small cameras are produced. The obvious DSLR, I regret to say, stayed in the bag.

Two hours forty minutes well spent, tour T purchased, nods of approval from my wife and son who in their words enjoyed the second set more than the first. Life is full of surprises. A Baptism of Fire for Mrs C, first Big Big Train’s album listening, and then Yes in Firenze; she has not suffered. Thank you Yes, your stage crew and your PR, it has been a great night. If the opportunity arises again I recommend the following; Yes, The Obihall, great venue, and to book a taxi back to San Lorenzo in the City. Three and half miles is a very long walk after midnight, but a night to be long remembered on my return home to my quiet Devon village.

SET LIST
Set One:
Onward (tribute to Chris Squire with recorded vocals by Jon Anderson)
The Firebird (intro)
Machine Messiah
Man in a White Car
Does it Really Happen?
Into The Lens
Run Through The Light
Tempus Fugit
Time and a Word (dedicated to Peter Banks)
Siberian Khatru
Set Two:
Roundabout
Cans & Brahms
We Have Heaven
South Side of The Sky
Five Percent for Nothing
Long Distance Runaround
The Fish (Schindleria Praematurus)
Mood for a Day
Heart of the Sunrise
~ Encore:
Starship Trooper