Working somewhat on the periphery of prog for much of their 26 years together, Jump are something of a well kept secret but their dedication to what they do and a stability in the line-up, that has kept much of it intact since the beginning, has resulted in a dozen previous albums and hundreds of live shows.

Thirteen may be unlucky for some but not Jump who now return with their new album, Over the Top, a fine collection of songs that underlines all that is good about this band. The sound often takes its flavours from the folk tradition but is delivered in a vibrant rock style that showcases the wonderful words of singer John Dexter Jones.

I’d more or less finished this review when it occurred to me that there must be so much more going on in these words than I realised, so I contacted John Dexter Jones and asked if he would mind providing some insights into the lyrics. He obliged, for which I am grateful, and I have integrated his stream of conciousness descriptions as they bring Over the Top to life much better than my meagre thoughts ever could.

The folk elements come together in openers Sir Thomas and the Passer-By, the grisly tale of an innocent who meets an untimely end after reportedly speaking to the previously hung Sir Thomas, and The Wreck of the Saint Marie where a ship is brought aground by false lights.

[ JDJ: “Sir Thomas…a morality tale…of religion. Sir Thomas is executed for not conforming…he appears as a ghost to a passer-by…who tells people he’s seen a ghost…but the ghost doesn’t speak to them…so they hang the passer-by as well…because his ghost isn’t real…not like the one they follow…There’s a bigger picture there…! The Wreck…a murder ballad…a ship is deliberately lured onto the rocks for its bounty and to hell with the people on board…a metaphor?? maybe…”]

John Dexter Jones is a wonderful frontman and possesses one of those voices that gets under your skin, dripping with emotion and with the range to back it up effortlessly, he animatedly relays his words in beguiling fashion, well supported by the rest of the band. The End of Days hints at Fish-era Marillion while Old Gods sees John railing against church and state with beautifully chosen words amongst a swirling mix of electric and acoustic instrumentation, a beautifully weighted guitar solo completing the picture.

Behind the Lines is particularly poignant, the fate of an unfortunate shot behind the lines during World War I delivered with vivid imagery. The Vagrant’s Song is equally well realised with Mo’s accordion adding a new texture, the words thought provoking and crammed with detail. As a lyricist John Dexter Jones is hard to beat but couple this with the wonderful delivery and it’s a combination to be cherished.

[ JDJ: “End of Days…Old Gods…Behind the Lines…Vagrant Song. They are deliberately placed in reverse order so that everything only becomes clear when you’ve listened a few times…a quartet of observations. The Vagrancy Act was employed after the Napoleonic wars to prosecute returned soldiers who had become a nuisance…(sounds familiar)…Behind the Lines…The deserter who doesn’t get back…shot for cowardice…Old Gods are the hands that drove them – the priests, the politicians and the judges (‘Shamen’, ‘Killers’, ‘Brothers’) and End of Days is a revenge song…what if the men in the last two songs got to speak to those in the second song…even meet them? Imagine a documentary that starts at the end…”]

The cover image is a self portrait of John’s 15 year old: “He brought it home from the park and I nabbed it there and then. It screamed out to me…’Look at what I do as a 15 year old…take risks, do mad things…’ and then I thought of the lad in Behind the Lines…what he did for adventure in 1916 and how it ended up…that’s why Charlie is missing from the back of the CD…airbrushed out…”

There’s a return to seafaring for This Beach, a shipwreck victim washes up on a sun-drenched shore. This one is delivered in a harder style, the twin guitars of Steve Hayes and Ronnie Rundle combining beautifully and building to a rollicking climax with laid-back finale. Johnny V is a particularly personal song to the loss of an old friend, with a suitably metal guitar solo, the words of 50 again well observed, casting images in the mind and all topped off with another fine guitar solo. Finally, Staring at the Rain succeeds in being erudite, detailed and drivingly funky all at the same time. A fine conclusion to a superb album.

[ JDJ: “So far all the songs on the album are, I think you’ll agree…dark…and deliberately so…ghosts dominate the scene. Then we turn over to the other side…This Beach is a love song. It is a song of true faith and hope, real resurrection and love. I know that for certain. (I was brought up by the sea and many of my family were mariners…nautical themes are inevitable!) Johnny V…the man from Bangor with the records, the man ahead of the curve…the man who regularly buttonholed me to tell me about what he’d discovered, the man who told me to be more ‘metal’ (that’s why the song explodes into Ronnie’s mad speedster solo…) and a man who died at 50 and whose death made me stop and think about what’s really important…really made me stop…So we wrote about him and recorded him forever. His funeral was at Bangor Cathedral, conducted by the Bishop and they played Twisted Sister as loud as the place could take…50…I told you it made me think….here’s looking at your younger self…growing through music…and life…which for me are the same…Staring at the Rain…I hate people in bands who tell you how tough it is…it isn’t, it’s great and it’s always been magic for me BUT the travelling I’ve (we’ve) done is not for the faint hearted…the violence I’ve experienced, the boredom, the weather…but on reflection the fireside tales that we already tell with great fondness…the friends we’d never have made unless we’d got out there. In the end that’s all any of us will have.”]

This band are all about the songs and are well versed in their craft, the result being a highly listenable album of true quality. The mastery with which the words are deployed is magnificent. Is it prog? Does it matter? As a piece of work Over the Top is a wonderful collection of songs that bears repeated listens. Do yourself a favour. 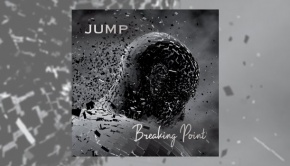