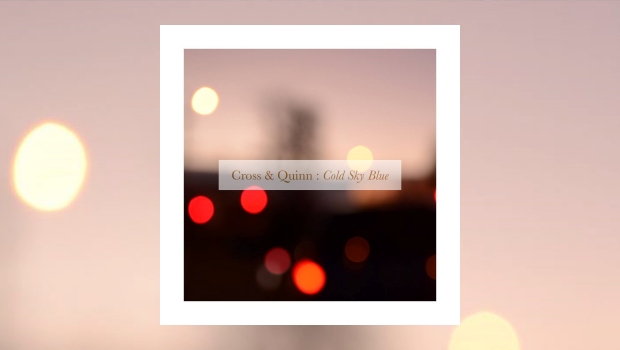 Of all the King Crimson alumni plying their trade in a solo capacity, violinist David Cross has always been one of the most interesting and he seems to be on a bit of a roll at the moment, featuring on a number of recent releases either solo, referencing his Krimson heritage or working alongside fellow KC brethren.

“I was always interested in ambient music and was working on a solo album which includes a collaboration with Roedelius. I started thinking about other artists I admired involved in ambient music. My all-time favourite band is King Crimson (72-74 lineup) and I was particularly fascinated by David’s contribution to the band – his melodic sense is incredible.”

The two were introduced by a mutual friend and via a lengthy telephone conversation they pitched ideas at each other which eventually became the first two tracks on Cold Sk Blue.

Opener Skyline Vertical features sedate and sparse ambient electronica from Quinn over which Cross’ electric violin solos freely. It is relaxing and quite beautiful, bringing Ed Alleyne-Johnson to mind for me. Quinn’s sparse piano is unexpected but the few notes make a significant impact. The distinctive plucked violin sound again references Alleyne-Johnson at the start of the title track, although the electronic rhythms are slightly more dance orientated. Almost trip hoppy, this is the first vocal track and Beth Hirsch (guest singer on Air’s Moon Safari album) adds her rich voice to her own lyric, the setting bringing Portishead to mind. The Mellotron is a nice touch here and the overall effect is very impressive.

The four guest vocalists featured on the album offer different textures and vocabularies that all work well with Cross and Quinn’s compositions. Brendan Staunton features on Counting All the Stars and its companion piece, closer Meaningless. The former is more rhythmic, Quinn deploying his drum programming skills, and is the first to feature brother Seamus Quinn’s bass and electric guitar. The effect is in the realm of The Blue Nile and satisfying indeed. Other than a few flourishes from Cross he is placed in a more supporting role here.

The cleansing drone of On Spider Hill is cleansing, Sean Quinn supplying the brief vocal towards the end, supported by acoustic guitar and Cross, his violin sound very unusual here, treated to sound like a synth at times and reminiscent of a pastoral Robert Fripp guitar at others. Paula Gilmer guests on the For Someone, a nice song but the bleepy Casio rhythm becomes a little annoying.

Arc En Ciel is split into two parts, the initial Alleyne-Johnson textures giving way to a more Celtic feel, Cross multi-tracked to solo over his own rhythm. The second part expands on this, a delay on Cross making it sound like he is dueting with himself. The filling in the sandwich is The M-Chord, an odd tale related by Thomas Truax concerning the monitoring of a dead spider in the cupboard at his Grandmother’s house. The music washes around, pulsing occasionally, and is a well put together and fitting setting, solidifying around Cross’ contribution after the words have ended. Seamus’ bass is noteworthy here too, the trio of pieces working well as a mini suite.

Overall this is a beautifully put together release that is a must for anyone with a fondness for Cross’ playing. Sean Quinn has done well in his production to ensure that the often sparse elements retain a vibrancy that allows the individual contributions to shine and this is another slice of mature music making courtesy of Esoteric’s Antenna label. Thought provoking yet relaxing, Cold Sky Blue is a highly enjoyable listen, particularly through a decent hi-fi.