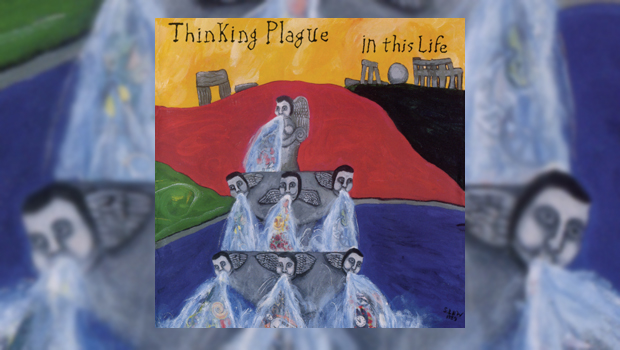 Stuck way down there in the heat and dust, or maybe up a mountain in south western-central USA, there exists one of the most important avant-rock bands of the modern age. I’m guessing that most of you will not have heard of Thinking Plague, formed in the early 1980s in Denver, Colorado by guitarist Mike Johnson and multi-instrumentalist, but chiefly percussionist, Bob Drake. Their unique and uncompromising way with classic RIO influences married to occasionally highly politicised and always thought-provoking lyrics has led to a small but perfectly formed catalogue of releases that serves as a marker for intelligent music making, resulting in a legacy of influence that can be heard in many other modernistic left-field bands today.

Currently constructing their seventh album by way of crowdfunding, In This Life is a remastered reissue of their third album from 1989, and the last from the initial flurry of activity from the group, with the next album not seeing the light of day until 1998. Even in those first few years the line up was in constant flux, with Drake and Johnson being the only remaining original members by the time of In This Life. However, by then singer and lyricist Susanne Lewis was established in the group, having also fulfilled that role on the previous album Moonsongs. All the music bar one track is composed by Mike, over which Susanne Lewis’s lyrics tell dark tales of the death of romance in a dystopian landscape. “The wheel I must turn with the world does not permit me my dream” she enunciates in her plain matter-of-fact fashion, at odds with the bleak, almost feral nature of her wordplay on the funereal Malaise.

A varied line up of instruments is given never less or more than the required amount of embellishment by avant production luminary Bob Drake, whose drums, percussion and sundry noises off make for a mesmerising listen. The longest track here, the strange and near-cacophonic Organism, joins flurries of percussive clatter to building stringed menace progressing on a tribal beat. The pulsebeat of platelets through arteries collides in metaphor with the rush of car headlights on a crowded highway. This is an unsettling and claustrophobic music that moves on subtly yet is relentless in its pursuit of a never reached or attainable goal. Gentle tap, tap, tapping, stuttering guitar possibly from guest player Fred Frith, it goes on, high tension wire pulling the song taut to its very core. Where is it going? Where are we going?

You’ll have guessed by now that this is not easy listening. The lyricist’s angst is at one point leavened by hope, or so we are lead to believe. “Love, you are twilight to me now, a drowsy wine of vague delight”, did Susanne find a way out the black? Well, that would be too convenient, for in this life nothing comes easy. The Love turns out to be “a false messenger” and “a poison” as Mike’s strident and edgy guitar figure points the way through this angular symphony to more disappointment in the land of disillusion. Some nice reed work from Mark Harris is hidden in here by the way, and one must commend the band who presumably can all read scores, for I cannot imagine this intricate and ultra-complicated music being composed or played any other way. The phrase I have applied to progressive music in the past is “music you can dance to in your head”. In This Life IS most certainly head music, but I’m darned if I can dance to it, inside my noggin or anywhere else. I’d be mad to try.

The Guardian is a vocally and instrumentally engaging little ditty composed entirely by Susanne, sounding strangely Oriental as it comes over like a very bookish Throwing Muses, and that is the only comparison I’m making in this review, for this music is unique and timeless because of that.

By the time we get to the terminally sad Fountain Of All Tears, with Bob Drake’s violin intermittently wailing like an exhausted and expiring banshee, the weight of all the lost love in the world, bereft of hope and dying as a dry seed discarded on a parched floor, this burden has crushed all strength out of the listener. Bitterly ironic “la-la-las” preface “down down a river of tears” towards a mournful moan from Maria Moran’s guitar, “for all love forsaken, for all love lost, the fountain where all tears collide”. Suitably the song fades away into nothing like disappearing hope, ending with Bob’s last plea from the violin.

Just before In This Life> was released to critical acclaim but no doubt insignificant sales, despite it having the extra avant scene kudos of featuring guitarist Fred Frith on Organism, and being released on Chris Cutler’s Recommended Records (aka ReR) label, Susanne Lewis decided to leave the band and Denver to pursue other projects in New York, and soon after Bob Drake decamped to L.A. to make a living as an engineer/producer, and so this era of Thinking Plague came to an end.

For a parting shot In This Life was a complete artistic statement, and like all good art it deserves the respect paid by the audience by way of their investment of time to listen properly. It also turns out to be the one of the saddest and bleakest albums I have heard, and you know what? It’s fucking brilliant. Remastered wonderfully from the original tapes by Mark Fuller and including a 12-page booklet containing all of Susanne Lewis’s remarkable lyrics, needless to say if you have a liking for RIO and difficult music you need this little black gremlin in your collection.

I somehow suspect that the new album, expected towards the end of 2016, will not be a collection of happy dance songs. 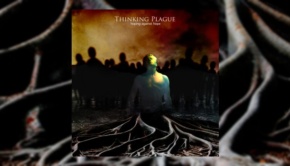