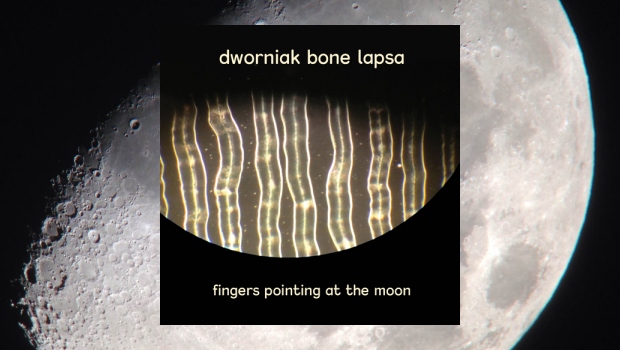 With such a wealth of new albums being released, and many now falling under the progressive umbrella, it is inevitable that a growing number will not receive the exposure they deserve. In the case of Fingers Pointing At The Moon from Dworniak Bone Lapsa (dBL) this borders on none existent, which to my mind is rather disappointing, as this album ranks favourably alongside many of the better releases from 2014. I’m therefore indebted to the band for tracking down TPA and sending through a copy.

Fingers Pointing At The Moon is a well written, sophisticated album that pulls in the listener gradually and in doing so, reveals music that will appeal across many levels. As I listened through the tracks it became apparent that the music had emerged from a strong song basis and then expanded into a much grander framework. Immediately striking is the airiness of the music, which rises from the strong acoustic framework that binds all the tracks. However don’t let me give the impression that this is CD is a jangly collection of folky tunes, on the contrary there’s plenty of meat as we travel through this progressive, blues tinged, art-rock offering.

I don’t wish to over emphasize the point, but the influence of Pink Floyd, with an inkling towards Porcupine Tree, is undeniable across the album, although I would stress that there is so, so much more to Fingers Pointing At The Moon than a pastiche of the aforementioned. The influence is however abundant on the album opener Mortal Man. From the atmospherically sweet vocal harmonies, through Lapsa’s rasping and uncannily David Gilmour timbred voice to Bone’s nailing of the guitar sound. But as mentioned there’s much more on offer, the strong lyrical content, the nice keyboard/guitar ornamentations and the cherry on top of the cake comes from Robert Wyatt, who adds some sublime trumpet refrains. But don’t take my word for it, just spend ten minutes and listen for yourself…

Fingers Pointing At The Moon, is a sedate album that derives it’s strength from the atmosphere it creates, again superbly captured in the albums lengthy second track, Home. Dirty electronic piano opens proceedings with Lapsa’s voice drenched in reverb, and decorated with the sounds from the numerous analogue keyboards used by the band. The music isn’t about instrumental virtuosity, but more about the contrast between the acoustic foundation, the driving elements and the effortlessly drifting keyboards. Listening to Home it struck me as a track that could easily have been written forty years ago, but still retains the vitality of the contemporary. Home concludes with a lengthy guitar instrumental, which I have not tired of listening to and like the music itself, it is airy and gutsy in equal measures.

With a strange amalgam of weird synth sounds, tortured vocals and a driving rhythm, It Only Takes A Second, whilst being a rather bizarre, psychedelic track – works rather well.

A standout track for me was gentle Funny Farm. Listening to this song it occurred that vocal melodies across the album are never particularly sweet or immediate, but along with the sympathetic harmonies, they soon work their magic and lodge in the mind long after the disc has stopped spinning. Phil Smith drops in with a moody baritone sax passage, before the sweetest of piano outros will have you pressing the replay button. Should you resist this urge though, the piano remains for the album’s title song and closing track. Once again a well written song that continues the atmosphere laid down by the previous tracks.

Fingers Pointing At The Moon took a few listens before it really started to resonate, but once it did, it turned out to be an engrossing and enjoyable album. There’s a great deal of lyrical content on the album, so it would have been advantageous to be able to dig further into the concept and lyrics, but sadly there’s no booklet. The album can be heard in its entirety over at SoundCloud, although you will miss out on the production values which do elevate the music. But certainly worth investigating as it will give you the flavour of the music.

With work well under way for the follow up album, slated for 2016, let’s hope the band can garner a few more reviews for their debut and in the process raise their profile.