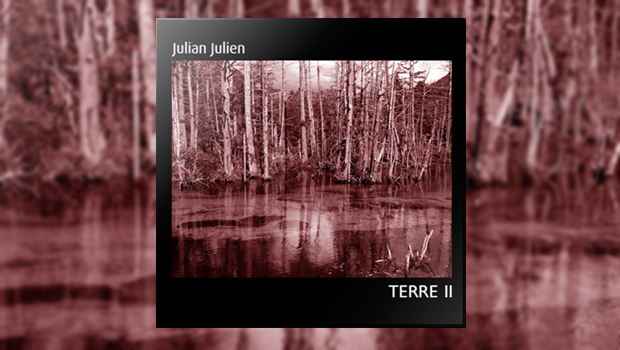 Continuing my current delving into the world of modern jazz-influenced progressive music, and following on from my review of the rather tasty Akku Quintet album, here we have another slice of European exotica.

Taking up the saxophone at the age of 9, Julian Julien has become a highly accomplished musician, having studied classical music before composing his own material, as well as playing in numerous jazz and rock bands. Terre II is his third solo album, and here he passes saxophone duties to the highly accomplished Michaël Havard, leaving him free to concentrate on composing, arranging and programming. Julian’s classical background mixes with his jazz sensibilities to produce an intriguing blend of the two musical styles, exemplified by the lilting opener Prélude, a piece that combines a flute-led madrigal with slinky jazz bass to great effect.

The album is an ambitious project that soundtracks the work of several photographers, and Julian is thinking of arranging an exhibition featuring the work of the snappers concerned with his music as accompaniment. Although the music works well in its own environment, the pairing of sounds and images is highly evocative, as you can see from the video below:

This is the illustration to Iris III, which enters a new age territory that fans of Theo Travis’ work with Robert Fripp will be familiar with. The following Une attente surprises with its upfront wordless but nonetheless very poetic vocal, and is another imaginative slice of soundscaping. A feature of the music is the highly crafted expansive sense of silence within the music, which leaves vapour trails in the blue stillness it passes through. Minimalist yet intricate, the album is the work of a highly skilled craftsman.

The trio of tracks Iris IV, Doudou, and Iris V make for an interesting sequence, with minimal abstraction underneath a horn venturing into free jazz territory leading into the melancholic electronica of Doudou, and ending with the retro-futuristic Iris V, which recalls the esoteric end of the synth-experimental Krautrock scene with its glacial serenity.

It is interesting to note that the jazz and classical influences of the first part of the album are now seemingly left behind, as space debris floats through the cosmic drift of Non-Sens, only for those tropes to return for the main part of the tune, a gorgeous otherworldly piece of jazz-chamber rock that slowly becomes ever more confident, with some great cornet blowing from Médéric Collignon.

It is fitting that an album of what is essentially soundtrack music ends with a tribute to the master of the genre, and apparently Julian’s favourite composer. Mr John Barry sounds exactly as it should, you don’t need me to explain!

With Terre II Julian Julien has made a really good album that effortlessly transcends genres, is highly emotive and evocative, and is a must for folk who can appreciate intelligently composed and arranged music.