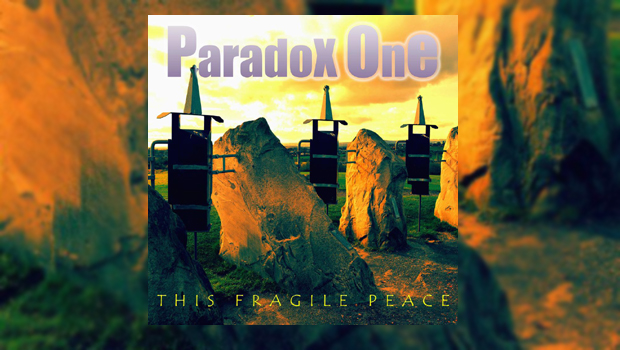 Starting out as long ago as the start of the century, Paradox One was initially a solo project by Scottish keyboard player and spacerocker Phil Jackson, who over the intervening years became friends with Tim Jones of Census Of Hallucinations fame – find my reviews of four of that band’s albums HERE. To cut a long story short, the idea was floated of reimagining the project from the bottom up, that is from the grooves created by the CoH rhythm section of Tim Jones melodic bass in tandem with Paddi’s drums.

Central to this spacious cosmic trip is the recognisable soaring guitar style of John Simms, now firmly in the CoH camp, but once known to those of us long enough in the tooth as the teenage prodigy behind the marvellous Vertigo “spiral” band Clear Blue Sky. Also adding a top line is Maxine Marten with her soulful voice. The whole is a wonderful amalgam of semi-improvised music that works very well, imbued with trademark CoH psychedelics, and mixed and mastered with his usual ear for clarity by Tim Jones.

Like a gently rising sun, Wheat In The Fields slowly spreads its warmth amid gentle strummed chording and Maxine Marten’s multi-tracked voices. The dawn mist clears to the accompaniment of rhythmic intent and a distant preaching voice…”mushrooms in the dark” is a phrase that drifts by on the ether as John Simms lets rip waaay down in the mix with some searing notes, bent up the fretboard. This contrast between the cosmic ur-rock and the solid grounded rhythm will be an ongoing feature of the album.

Linking the tracks is the three part Ethereal Soldier, which as its title implies is an impressionistic piece, firstly built around Maxine’s beguiling tones, the second part then mirroring her melody line with John Simms’ liquid and lonesome guitar, joined in the final part of the trilogy by Phil’s organ, slowly drifting away, evoking strangeness and charm.

Giving “power in the darkest hour” during Darkest Night is the first hearing of Phil’s soulful piano playing, adding a layer of humanity to the otherwise cosmic vibes swirling around. These are much to the fore on the dreamy Waiting At Airports, a song that makes that most tedious aspect of travelling seem like something to look forward to.

All The Way, while built on a solid rhythm has a loose jamming feel, and Phil contributes some nice jazz-soul piano and organ that puts me in mind of Brian Auger. Here, we also get to hear Phil’s bluesy vocals for the first time, lending proceedings a good earthiness. Bluesy folk guitar licks shoot through the spacerock vibe of the title track, while another disembodied voice mostly out of reach is “never denied” and “signified”.

The album ends with an upbeat spacerocker, The Unknown Unknowns drives along in a fashion not a million miles from the punk-inspired Here & Now, with more great guitar and keyboard work atop the solid rhythm section.

Anyone familiar with Census Of Hallucinations, or the aforementioned Here & Now, Gong, Hillage, etc, should give this a go. You won’t be disappointed.