Braindance have been around for a while and Master of Disguise is their fourth album. The press blurb rather precociously states that they are “a visionary New York City project”. I cannot say that I agree as the material leans towards the prog metal aspect of the genre, an area that I don’t often venture into, but the accompanying video amused me; leather, ripped pecs, pretty much standard metal riffs and keyboard accompaniment. Sebastian’s vocals suit the material and the prog metal spectrum, though I find the use of studio vocal enhancements a little wearing on repeated listens. It’s a shame as the voice without them is good, as is the backing provided by Vora Vor and Natasha, providing fine counterpoints to the lead. When she leads, Vora Vor’s voice is rather pleasing by way of contrast. 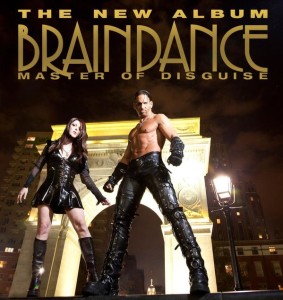 The album entertains. It probably won’t win any awards but I have heard far worse and by more established bands. Musically it seems quite firmly rooted in the 1980s; BIG production, electronic trickery and some pretty standard metal riffs. The track Lost wouldn’t be out of place if you were listening to any of the metal dedicated radio stations; the video that the band sent with the album is, I hope, presented with tongue firmly planted in cheek. Oh please let it be so! if not, sorry guys, but it made me smile.

The theme running through the album is one of finding yourself, that understanding of just who you are. It’s atmospheric, questioning, and soul searching. I hope their search was successful. Written by Sebastian, I think the journey is quite personal and, since we all travel our own paths, it is an interesting insight into another man’s search for self. Enhanced or interspersed by soundbites and audio clips from movies, it relates the narrator’s passage to self-discovery, his trials, and tribulations until its conclusion. I enjoyed trying to identify the clips, definitely a few films in there I recognise, but personally I think after a few listens these may begin to irritate.

In discussion with a metal loving friend, she divided the album into two halves; the first, tracks 1 to 5, are like Lordi, the Finnish Heavy metal band and Eurovision song contest winners (!!) whilst from track 6 onwards it becomes similar to Queensrÿche. So in the interests of research, I listened and I can see her point; thanks Em!

Moody intro pieces (Unearthed), electronically enhanced vocals (Lost), great drums (Hunter and Hunted). Dysphoria and Dystopia feature the sound clips while the title track is an attempt at an epic Queen-esque Highlander film soundtrack-type music with the vocoder again. But visionary? Sorry it is not.

My favourite track is The Silence. For some of you not prone to this area of prog, the title may become a wish, but I like it. It is as they say, a matter of taste. The weakest link (winces)? Lost. I can’t put my finger on why, but it seem a little out of step with the rest of the album.

The last five tracks are the most coherent in terms of being progressive, joined-up and together. They flow into each other a little better with more emphasis on structure and less riffing by numbers. I stick by what I say, it’s alright, it entertains, and that ultimately is its goal.

So if you are fond of eighties/nineties rock (Europe?) and not dissuaded by a video that is quite “Spinal Tap” then buy it. It is a nice overall package, not a bad album, and the artwork and graphic novelette make you feel you have value for money. It has a lyric sheet so you can follow the narrative (though the colour combination makes it a tad hard to read). I can’t say it will be the first album to get pulled from the racks of an evening, but it has overall been an enjoyable experience.

PS. The descriptions of themselves under the ‘Musicians’ section below are their own; scary, lighten up guys.