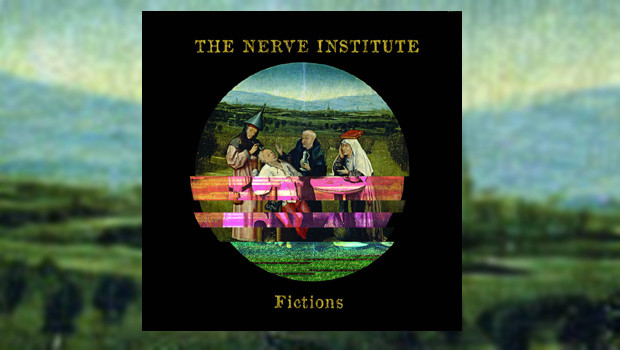 From the Hieronymus Bosch cover art you know that the contents is likely to be something unusual, and so it is as Mike Judge takes us on another journey into some strange but very satisfying musical coves.

A Kansas City native, having worked under a number of different names since the turn of the millennium, Mike’s 2011 album Architects of Flesh-Density (his first as The Nerve Institute) was my favourite album of that particular year and it still holds up as an Aladdin’s Cave of wonderfully interesting and idiosyncratic tunes.

After a long wait we finally get the second instalment, Fictions. As with the first release, the fact that Judge put it all together on his own – composing, playing and production, with just one co-write and some guitar and keyboards on a couple of tracks from White Willow’s Jacob Holm-Lupo – is quite simply remarkable as his skills across all areas and a wide range of instruments do not, as is often the case with one-man-bands, let him down. There is no weak link here.

After being a member of seemingly dozens of bands Mike has been a solo artist for some time now. As he put it himself around the time of Architects…:-

Busy, busy, busy. But luckily there has been time for the small matter of Fictions. So what do we have here? The 10 tracks are generally fairly succinct, tightly composed and to the point with a couple of longer tracks thrown in. Dragging the listener in by the ankles like a troll under a bridge, The Confidence-Man is a great opener, insistent drums supporting an acoustic song with a gothic edge and an air of Victorian melodrama about it. Throughout Fictions, Judge’s guitar is excellent providing all manner of textures and on The Confidence-Man there’s also a banjo in the mix which is indicative of Judge’s style – if it adds something, it’s in. The rhythms seem to have a life of their own and towards the end we head off in a South American direction on a wave of samba percussion.

The variety of the rhythms and textures deployed is a common device with Judge providing the backdrop upon which all manner of effective yet unorthodox melodies can wander, such as a brief section of the lengthy Knives of Summer which teleports us to the Indian Sub-continent with chanting and hand-claps, or the skewed Tango of the lilting and melancholic Abrazo y Caminando (Embrace and Walking). Tango purists will probably blanche but I am not one of those and this is great, Downtown Buenos Aires shot through with Gormenghast. Other than a squalling guitar section that holds up the rhythm – possibly at gunpoint – it survives intact and continues until slowing to a stop, possibly as the band fall down a carelessly unmarked Argentinean manhole.

The multi-layered power of City of Narrows (co-written with Holm-Lupo) features almost recited verses and U2-like drumming as sheets of guitar sweep this way and that, a plaintive chorus emerging in between. There is room for unorthodox keyboard and guitar solo sections, the latter a spidery affair that winds around itself beautifully with hints of Holdsworth and Zappa. Holm-Lupo’s second appearance is on Grimoire, the shortest track but a beautifully formed affair with a fantastic arrangement of guitar layers; mellow rising and falling scales, bell-like echoes, fast picking, delicious repetition and variations. An odd little off-the-wall solo moves into a smoother odd little solo and then Fripp descends from on high for a chaotic ending.

Knives of Winter (appended by Coronation Day) may be linked to Knives of Summer but it is hard to see how as they are very different pieces. The former emerges quietly, Judge sounding like he’s singing down a drainpipe. The picked guitar is lovely, percussion and keys taking things in a prog direction with effects leaping out around the words. But suddenly wall of sound Krimson-esque chords emerge with an equally KC spiralling guitar section. Abruptly, a change of pace from rhythmic percussion and the guitar goes all Santana. Wind tinkles through a chandelier and a military rhythm emerges, presumably for the Coronation, and what a day it is as shrieking shards of Muse guitar erupt. Oh, and there’s a funfair for the guests afterwards. Knives of Summer is longer (the first of two tracks over 10 minutes) and opens with an a cappella blues of “I believe I’m fixin’ to die”. A simple yet highly effective keyboard line emerges, drums and percussion picking it up for a repeating guitar figure. The keys go a bit Flower Kings and a beautifully melodic section is infiltrated by interjections of spiky Krim. Various flavours of guitar collide and a snake-like melody successfully emerges at the other end, continuing through a series of changes of mood, feel and texture. Marvellous stuff for those who, like myself, appear to have undiagnosed ADHD, there is just so much going on here – AND IT ALL WORKS!!

The staccato rhythms of Rayuela are soon replaced by more delicate electric piano, easygoing jazz guitar returning to a frenetic rhythm for the finale. If it’s a spooky feel with West Coast guitars you’re after then Whistling Wire may well be for you. This is more of an actual “song” than some of the others here but packed full of many interesting and compelling details. Strident guitar and the ubiquitously odd effects move the music around in different directions with pastoral Fripp soloing in the background. With Joy We Espy the Sarcophagus is certainly a title to conjure with and so Mike does, another spooksville entrance moving through jazz influenced sections that build on each other to an organ solo. And then things go all weird again with stuff coming at you from all directions, the fog descending to shroud the sarcophagus once more at the end.

Last but not least is the closing epic double-punch of Docile Bodies / The Leprosarium. The twinkly electric piano that leads us in is lovely, it has purpose about it and it opens out into a huge “chorus”. There’s Mellotron and backwards vocals. There’s “woo Woo”-ing and VdGG organ. A woozy guitar (probably drunk on all this ingenious to-ing and fro-ing) stumbles past and is sick in the gutter. The pace picks up and an altogether more sober guitar soars. Meanwhile, back on Earth, we’re in a sleazy nightclub, the house band are playing to two barflies and a stripper. But wait, this guitar guy can play and the jazz moves from sedate to spunky, drums finally chasing the guitar out of the door and down the street. There’s a pause. Sounds drift out of the distance. The Backwards Dwarves are taking over! No, it’s the Forwards Dwarves. They’re probably not even dwarves!!! They are calling out numbers from deep in the heart of a mountain. There’s another guy. Is that their accountant or is he reciting a bus timetable? Oh it’s finished. Wow…The Leprosarium really isn’t the place to be…

I’m going to be lazy and bung in a paragraph from my review of Architects of Flesh-Density as I’d only have to re-write the same thing oterwise:-

“There is experimentation and delightful playing but the main criteria is listenability and Judge has succeeded in spades as this is an album that reveals more of itself and its creator over many listens. There is a great sense of harmony and although dissonance plays a part this is not one of those jagged and largely unlistenable albums that are supposed to get you stroking your chin and thinking deep thoughts.”

Fictions is simply an exhilarating listen for those of us who love musical surprises and the unexpected. The attention to detail inherent within Judge’s polymathic work can only be applauded and the fact that the resulting music hangs together so well is extraordinary. To his credit Mike keeps most of the songs very focused and this prudent self-editing is something that many others could learn from. He gives himself enough space to stretch out – but only just enough and doesn’t allow his compositions to teeter over under their own weight. Less is, as is usually the case, more – less length, more girth (as my wife is inclined to opine…Ahem…).

I don’t have access to the lyrics so can’t even begin to tell you what is going on here, suffice to say that it is all probably quite, er, odd. The influences are, on the whole, not obvious as they have gone through the Judge Blender and been mixed and matched with unrelated sources to come up with something new. This is often seriously weird and whilst snippets may bring some influences to mind, individuality is retained and there is nothing that I have heard to compare to what Mike has done so far with TNI.

Mike Judge is to be applauded for going down his own route and producing such an idiosyncratic release that, like the first album, just ticks all of the boxes for me. Excellent stuff and a massive ‘well done’ from me Mike!

Not for everyone but give it a listen, you may well like it and hopefully it will also drag you in, like the proverbial bridge-dwelling troll.

[Mike Judge graciously agreed to answer some questions about The Nerve Institute and his other work, the interview can now be read HERE. A huge thanks to Mike for his time.]