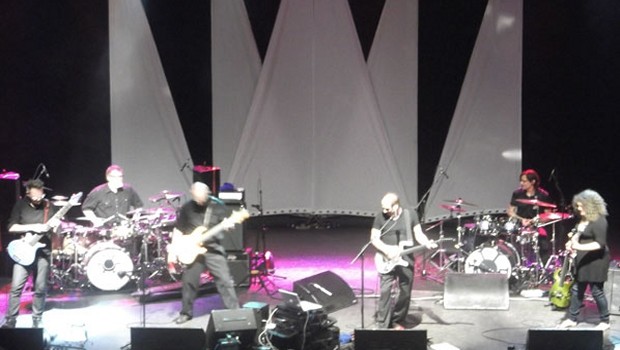 Having reviewed the recently released Live In Tokyo by The Crimson ProjeKCt on these very pages, it now falls to your intrepid correspondent to report from the front… well, row D seat 15 of the balcony, to be exact.

The stage is set. Counting the number of speakers in the columns pointing towards us, I arrive at a total of 17 on either side of the stage, the most I’ve seen at a gig for some time, and a somewhat intimidating sight. From an audience perspective, stage left we have Pat Mastelotto’s “traps and buttons”, a sprawling array of conventional drums and electronic gadgets, that like the man himself is larger than life. Contrast that with stage right and Tobias Ralph’s more modest and conventional kit.

At 8:05pm precisely, Markus Reuter walks out alone, picks up his Touch Guitar and commences a soundscape, the manner of which will be familiar to any Fripp fan. After about five minutes or so, on walk Pat and Tobias who launch into the syncopated double drum blast of B’Boom that instantly tells us that Mr Ralph is not to be steamrollered by Pat’s rhythmic behemoth, and a telepathic communication is established between the two drummers that sets the scene for the evening’s entertainment.

The rest of the players emerge, and we have Tony Levin’s Stick Men stage left and The Adrian Belew Power Trio stage right. These two ensembles have the academic air of a campus faculty night out. Stick Men are the Science Department, men dedicated to a logical approach that comes to a technical climax later in the set with their stunning version of prog rockers’ classical composer of choice, Igor Stravinsky’s Firebird Suite. The Adrian Belew Power Trio are the Arts Department, brimful of emotion, flinging their musical paint around like a collective Jackson Pollock, their own E being a visceral case in point.

Collectively the two trios complement each other perfectly, epitomised by the contrast between Markus who is ever studious, and respectful of his instrument; and the barefooted Julie Slick, gate crashing from the opposite side of the stage, just keeping control of her bass monster, Julie playing Penny to Markus’ Sheldon Cooper. Joking aside (sorry guys!), it was plainly obvious that all six musicians were having a ball, Adrian’s infectious good humour transmitting easily out into the sold–out auditorium. 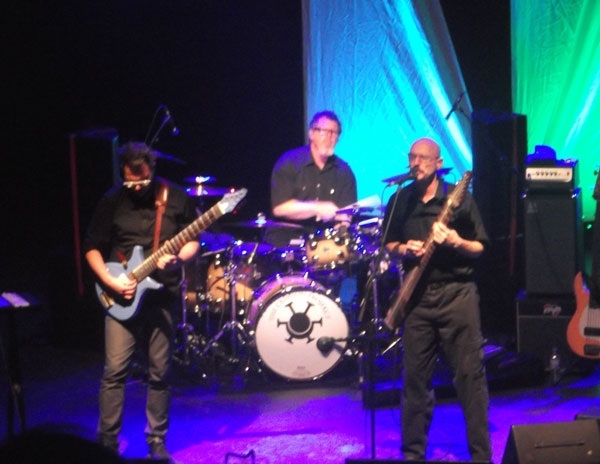 Back at the Science Department, Prof. Tony Levin takes an understated approach to the leadership of his charges, all the while coaxing a many-octave range of notes from his trusty Stick. This leaves the spotlight to fall mostly on Prof. Adrian Belew over at the Arts Department, standing there in his trademark white jacket, and wrangling his charging rhino guitar. The jacket is soon discarded as Adrian squeezes and bends all manner of odd sounds from his instrument that makes his playing style as instantly recognizable as his voice, which amazingly enough the passing of years has done nothing to diminish. His range and power is still just as it was thirty years ago, and the new Crimson can only miss it.

The way the gig was planned, with small sections featuring each trio interspersed at intervals between the double trio numbers meant that the set flowed organically without sudden changes in mood that “sets within sets” may have created. It also meant that each trio could have a break while the other was playing, thereby removing the need for an interval, keeping us glued to our seats for the near two and a half hour total of the gig. 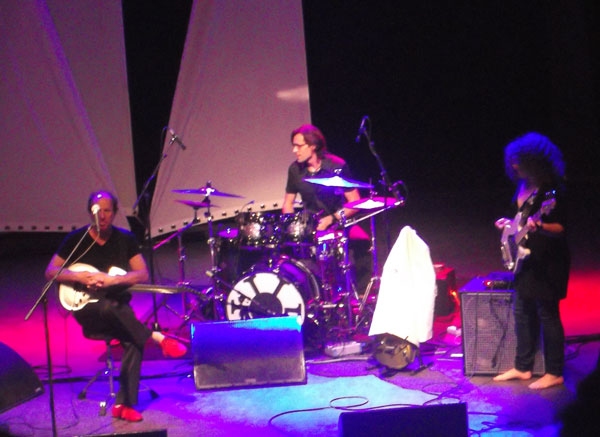 Tony clips on finger extensions and picks up a conventional bass guitar for a pummeling rendition of Sleepless that makes King Crimson’s album version sound rather tame. This is one of the highlights of many from an evening of edge-of-seat fun and games. The sound was loud but clear, such was the volume that I could bellow along to Dinosaur without my seated neighbours being any the wiser, luckily for them! The sound settled down after a version of Frame By Frame that almost leant too hard on the volume slider, so thankfully my initial fear for my shell-likes at the sight of the mountain of speaker cabs was largely unfounded.

Particularly poignant was a trio formed from the three ex-Crims on the stage, Pat, Tony and Adrian, who performed a rather fine version of Three Of A Perfect Pair, logically enough! Also, and as we were informed for only the second time, Adrian and Tony gave us the achingly beautiful ballad Matte Kudasai as a duo, Adrian thanking Tony as he remarked afterwards that he had “forgotten how much Tony added to the song” before performing it with him for the first time at the previous gig. 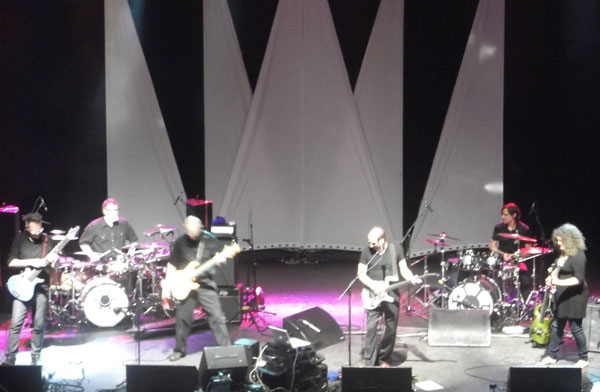 The main set ended with the most intense live outing I’ve yet heard of the best song from the Crim’s 80s incarnation, the mighty Indiscipline. A prolonged intro during which Pat and Tobias played pass the paradiddle, staring at one another, completing each other’s fills, and all nailed down perfectly, only served to reinforce their mutually telepathic understanding of the beat. While this was going on, Julie’s bass and Tony’s Stick play that familiar five times one note refrain sometimes singularly, sometimes in unison. The effect combined with the clattering rhythms is just the kind of bone shaking unsettling racket that modern Crimson, in any guise, are so good at. Once underway, the song itself teeters on the edge of nervous collapse while simultaneously reaching emotionally charged peaks led by Adrian’s baying and howling guitar. Bloody marvellous! It is a rare thing for me these days to experience such a joyous rush at a gig, but this one hit the spot for sure, as did Thela Hun Ginjeet in the encore. I LIKE IT!

A great night for us veteran gig goers that only serves to whet the appetite for the Crimson reunion shows, probably around this time next year. They will have to go some to beat this.

The Crimson ProjeKCt – Live in Tokyo →