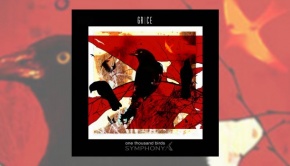 In 2019 Grice Peters recorded this, his third album, One Thousand Birds at Forward Studios in Rome which is due... Read More →