Jeff Beck Was My Hero

British guitarist Jeff Beck has died at the age of 78. His family say that the musician had contracted bacterial meningitis and passed away ‘peacefully’. Beck was known as one of the best guitarists of his generation. THE best, as far as I’m concerned.

With his unique sound, virtuoso technique coupled with a superb ‘feel’, he had his very own style, which cannot simply be pinned down to one genre: pop, (hard) rock, heavy metal, blues, rockabilly, jazz-rock, avant-garde, electronic, instrumental, vocal. In short, a genius, constantly reinventing himself. A pioneer too, often put in the same category as the world’s greatest, alongside Hendrix, Clapton and Page. He found himself on stage together with the latter two in 1983 for a legendary version of Stairway to Heaven, and loud and clearly audible on records by Roger Waters, Mick Jagger, Tina Turner, Bon Jovi, Hans Zimmer and Kate Bush, among others.

I devoured his unauthorised biography, Crazy Fingers: the early years, experimenting with the sound of his guitar and amplifier, the step to rock with the Yardbirds, replacing Eric Clapton, the unexpected and hated super hit with his own Jeff Beck Group, his collaboration and friendship with Rod Stewart, as founders of heavy metal, Led Zeppelin is still indebted to him. He followed this with the years with power trio Beck, Bogart & Appice and a reasonably successful period of solo albums in the mid-’70s. He had a unique and unlikely liaison with Stevie Wonder, resetting the latter’s career with the creation of Superstitious, co-written by Beck. But there was also the switch to jazz-rock and his collaboration with the Czech keyboardist Jan Hammer. After a somewhat less successful period, the return to the spotlights followed at the end of the 1990s, culminating in the registration of the legendary performance Live at Ronnie Scott’s. Just listen to/watch this version of Angel (Footsteps). Goosebumps.

His role as the standard bearer of the electric guitar should certainly not be underestimated. His ‘marriage’ to the Fender Stratocaster, his pioneering work in the field of feedback, distortion and fuzz, his inventive use of the tremolo arm (or ‘whammy bar’). All ground-breaking work and a source of inspiration for many aspiring guitarists. Beck switched from a guitar pick to the so-called ‘finger-style’ in the 1980s and developed his own, inimitable technique.

Lesser known is his passion for fast cars, especially so-called hotrods – he did not shy away from tinkering with them himself, with all the associated risks, especially to his precious hands, reportedly insured for EUR 10 million. The same hands that, even during an inactive period when he was not performing or recording in the studio, were still busy practicing and playing for many hours a day. Someone who turned down an invitation to join The Rolling Stones (after Mick Taylor left in 1975). His most recent album, 18, released last year was the Brit’s eighteenth studio album, recorded alongside that other unique and controversial artist, Johnny Depp, was well received by both press and public. The same Jeff Beck, unique talent, legendary guitarist, headstrong guy, eight-time Grammy winner, twice inducted into the Rock ‘n’ Roll Hall of Fame, is no more. 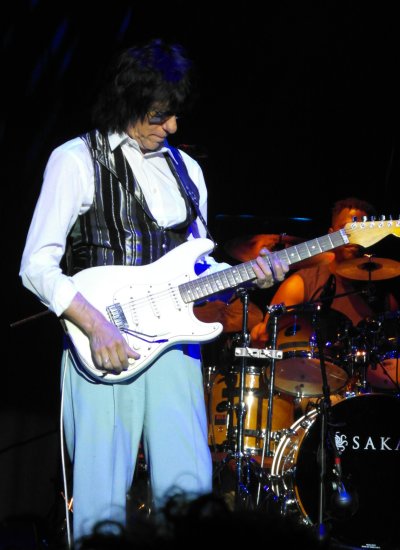 I have had the pleasure of seeing him perform live twice: the first time together with my son in the temporary Vredenburg theatre in Utrecht, Holland, called the Rode Doos (Red Box), in October 2010. Fascinating to see him live up close, I couldn’t take my eyes off him. Fabulous technique and completely unique in his approach to music. The second time, a few years later in May 2014, also in Utrecht, together with my guitar-playing brother. As much as possible at the front, close to the stage, packed together with a few thousand others in a sold-out Tivoli/Vredenburg, dozens of photos are proof. Dressed in a loose-fit light blue suit, the inseparable RayBan sunglasses on the nose, the hair still raven black.

Another icon of popular music has passed away. One that caused commotion and emotion and was always unique, averse to convention, even rebellious and with a highly flammable personality. Partly because of this, he was not always popular with the general public. But for the connoisseurs, beyond doubt, a real ‘musician’s musician’. 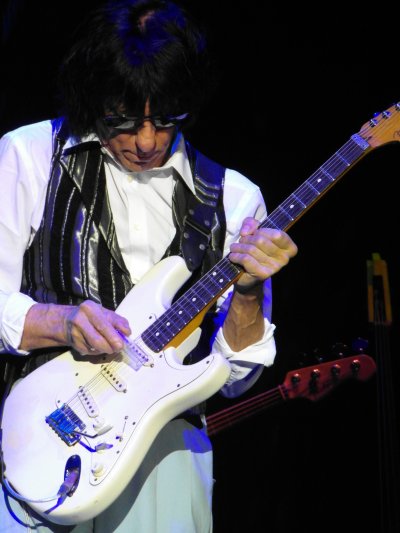 [All photos by Alex Driessen]