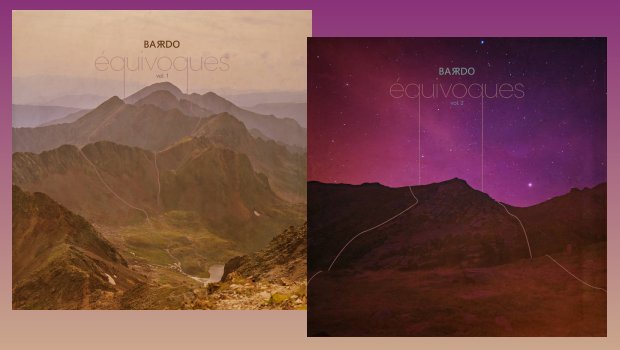 It’s not often that I would review two albums together, but there’s really no way to do justice to either volume of Barrdo’s Équivoques by tackling them individually. In terms of length, the two could certainly have been released as one title, but there’s very good reason for the separation into two volumes. Much of the enjoyment and wonder of Équivoques, Vols 1 & 2 comes from the way that they really are day and night. You can see this just by the artwork, without hearing a note – but, wow, the way Barrdo have aurally depicted the difference between day and night in the music has to be heard to be truly appreciated. Where the first volume is all light and airy, soft, smooth and slinky, the second is darker and edgier, harder, angular and heavier. The two complement each other beautifully in their contrasts, and the change in aesthetic and atmosphere is incredibly impactful.

Barrdo seem to have around a dozen releases since their first in 2015 (at least, that I’ve found across two Bandcamp pages), but the structure of the Équivoques releases gives a cohesion and coherence to their sound that is somewhat unprecedented. Thus, while the music of Barrdo has always been rather eclectic, with a great deal of sounds and styles thrown into the mix, because of the way the two Équivoques volumes have been structured, there is a fluidity and flow that no other Barrdo release shares. Especially with Vol. 1, there is a subtlety that belies the progressive and exploratory nature of Barrdo. Unlike earlier releases, there are no real curveballs thrown here, and on first listen it could almost be mistaken for an indie pop album. Almost, but not quite. In fact, I found it quite reminiscent of the self-proclaimed “experimental pop” of Belgian RIO band, Aksak Maboul. Those who enjoyed that band’s 2020 comeback album (after 30 years absence!), may well find much to enjoy here, too.

While I wouldn’t go so far as to say they mine the same RIO/Avant foundations as Aksak Maboul, Barrdo definitely have an eclectic and experimental flair. The music of Barrdo, throughout previous releases, and even over just these two, is diverse enough that it is hard to nail down any particular influences. I’m reminded of several different bands and artists, but whether or not they actually influenced Barrdo is, well, equivocal. I’m reminded of the folk and fusion of fellow Canadians Maneige, Sloche and Harmonium, and of the chanson of troubadours such as Jacques Brel and Serge Gainsbourg. Perhaps a little more fusion via Miles Davis and Herbie Hancock. Krautrock a la Can. From more modern times, Luna, Portishead, Stereolab, Aquaserge, Circle and King Gizzard and the Lizard Wizard. Heck, by the time we get to Vol. 2, maybe even some Swans, Shellac, and Dream Theater? Why not? Barrdo appear to have no stylistic barriers, no limits, nor constraints.

On previous albums one can imagine some critics complaining of a lack of direction (though I would never be one of those), but by creating such a deliberate dichotomy with the two volumes of Équivoques, there is greater focus and less disorder, as sounds and styles are channelled one way or the other, giving order to chaos. Équivoques Vol. 1, then, is the easy going and easy listening pop, psych and folk and chanson album. But as the light dims, the denizens of the night come out for Vol. 2, which is more unhinged, unbridled and abrasive. The post-rock turns to math-rock. The psychedelia of the first volume is twisted into more metallic forms. The shoegaze into stoner haze. Dream pop into noise rock. If you look upon the discographies of, for example, King Crimson and Frank Zappa as mixing beauty and the beast, then Barrdo has put all the beauty on Vol. 1 and saved the beast for Vol. 2.

But who are Barrdo? Or, perhaps, more accurately, who is Barrdo, for while there are over twenty performers (including a string quartet and two choirs) over the two volumes of Équivoques, the band is essentially the project and vision of multi-instrumentalist Pierre Alexandre (aka PA), and whoever he needs to take him to where his instincts and desires dictate. This feels like the most ambitious vision yet from PA, and in my opinion he has perfectly realised it. The heterogeneous nature of previous Barrdo releases is not compromised, so much as concentrated. Both have rich and exploratory arrangements, but completely different aesthetics. I guess it might be entirely possible that some listeners may like one album, but not the other – so different they are, in spite of sharing so much. I guess I’m still undecided, even after so many listenings, but I think I love both equally, and have not yet listened to one without wanting to listen to the other too.

What’s intriguing is that the two Équivoques appear to have had their genesis in 2020, a year that saw many (if not most) bands creating more minimalist and stripped down albums, with less instrumentation and ornamentation. Instead, PA has gone gloriously over the top to create the most lush and expansive Barrdo release – or, indeed, releases – yet. It seems a great shame to me that these two albums will likely fly under most listeners’ radars, so I dearly hope at least one or two people who read this might take a chance and give the two volumes of Équivoques a listen. The greatest problem I can foresee is that most prog fans tend toward either the classic sound of symphonic and neo-prog, or for the more avant and experimental. Barrdo approach both poles, but in such a zig-zag fashion, and taking in so much more along the way, that their audience is potentially as narrow as their palette is broad. I hope I’m wrong, because Équivoques is an awesome pair of albums that deserve to be heard and enjoyed.