Hotel Utopia is the stunning new album by the award-winning, Manchester-based multi-instrumental duo of Chrissy Mostyn and Rick Pilkington. Elegantly weaving together elements of prog, art-rock, pop, electronica and classical music into enchanting, cinematic soundscapes of both power and delicacy, whilst Chrissy’s fragile, ethereal and emotionally charged vocals soar above them. The overall effect is simply spellbinding at times and with a deep lyrical content exploring the themes of love, loss and the afterlife, the duo have managed to produce an album that could well be their most complete and coherent release to date.

It is three years since the release of their last album, the wonderful Mesmeranto. It was a very well-received and much praised album of yearning beauty, depth and diversity, with its unifying concept of death, inspired by the passing of Chrissy’s mother who was nearing the end of her life. Never afraid to take on the most daunting of subjects, Hotel Utopia takes a musical look at the afterlife and the fears and hopes around that last great mystery and the human condition in general. What happens after life? Do the lights go out or is there something beyond? Is there a God or a spiritual pathway? Is there a heaven? These are big questions which Rick and Chrissy explore through thirteen tracks of effortless musical complexity and yet beautifully judged, contemplative simplicity.

Chrissy asks, “Is death what gives life meaning? In Hotel Utopia the songs are like rooms in a hotel, the hotel being our mind. Hotel Utopia is the human condition, and we are the guests. But is the hotel our current life or our afterlife? Each song is a reflection on our existence, our fears and the many things that encompasses such as love, loss, suffering, growth, suicide, joy, surrender and the unanswerable question we all ask – where do we go when we let go of our final breath? Was this even Heaven all along or is there something, somewhere or someone waiting to gather us up and lead us onwards?”

The Tide begins the album. A song dealing with the end of a loved life (Chrissy’s mother a few months earlier) and about surrendering to your feelings, with the idea of the sadness and anxiety departing with the tide. With the use of a vocal chorus played backwards, this soothing yet searching ballad casts a spell that continues throughout the album. After the Clannad-like opening, Chrissy’s child-like, whispered vocals flowing over hypnotic, undulating keyboards and a slow-paced rhythm, create a sense of peace and yet palpable feeling of loss.

“On our backs in the darkness
There’s no coming back
From where we’ve gone
On our fronts in the shallows
Waiting for the tide to arrive.”

The accompanying video, filmed by the shoreline, is suitably poignant and moving.

Under the Headlights was the lead-off single, an accessible pop-oriented song that is equally moving. A wash of synths accompanied by Rick’s prodding bass rhythm, sets up a rousing and defiant chorus, with Chrissy’s subtle octave rise in pitch at the end of the main chorus line so emotional and effective, providing an irresistible vocal hook. The lyrics also look at letting go of our anxieties and seeing our lives as part of something bigger.

“Under the headlights of your God
I’ve gone to the city cos it’s over.”

The song ends with a pleading refrain of “Can you see me?” with Chrissy’s vocals at their most Kate Bush in style, and the car-orientated video, filmed on the South Downs cliffs near Beachy Head, is both sad and yet exhilarating at the same time. The track also features the voice of the ’60s British philosopher Alan Watts, emphasising our eternal link to the sea and an analogy for our existence.

Safe is like an eerie fairy tale, which juxtaposes playful, dancing opening vocals, guitar and harp, with a darker, uneasy tone. Chrissy asks whether, when we go to sleep, is it the same place we go to when we die? A subtle folky guitar motif and catchy, harmonised chorus of “Let me know when I’m safe” works very effectively.

Dark strings introduce The Warning and look beyond the personal, asking whether Earth itself has an afterlife, and acts as a sad warning to the human race that is seemingly dedicated to self-destruction. The acoustic guitar, piano and breathy vocals that follow are both melancholic and yet somehow edged in hope, although maybe one that is unfounded. The religious imagery conjured up on the trotting chorus is both memorable and captivating.

Astronaut provides us with a child’s vision of life that is gradually replaced by reality, although there is positivity and a message to never give up on our ‘inner child’. “He’s gonna be an astronaut. He’s gonna be a spaceman. He’s gonna be a hero…” is innocently intoned by Chrissy, over a repeating, keyboard-led rhythm pattern, but then Rick delivers some powerful slabs of heavier guitar riffing over an increasingly urgent and insistent chorus to great effect.

Alive is gentler and more contemplative, with piano and harp accompanying the searching and deeply melancholic lyrical content concerning the sanctity of life and the mystery of death. A darker song looking at suicide and what happens after we take that leap from the cliff edge. As Chrissy explains, “Are we met with God, our loved ones, or simply the rocks beneath our feet?” Yet the song highlights that paradoxical exhilarating feeling of being alive so close to that edge and Chrissy’s closing hummed lullaby-like refrain captures the emotion perfectly. This is brooding, cinematic music that The Blackheart Orchestra do so well.

A Dangerous Thing also starts with some beautiful, resonant, ostinato piano lines over minimalist strings, and ponders whether love is even greater than death? However, the cleverly composed lyrics look at whether love can be almost too huge for us to carry and provides us with a warning of its dangers.

The increasingly sinister musical interplay of menacing synths still provides space for the chorus, but the plaintive saxophone later on is, according to the duo, both a shout of anger and a scream of pain – with the atmosphere heightened by drums and chanting.

Casting Spells wonders if someone somewhere is looking at the balance between the good and bad deeds in our life and making a judgement on our future destiny in the afterlife. It builds up a powerful and stomping head of steam instrumentally, as the vocals twist and turn and there is a real anthemic quality at times.

Dust is a very innovative track. Chrissy’s usual angelic vocals are slowed down to half speed, making them deeper, sadder and actually unrecognisable. Yet the effect, over stately piano, is deeply moving. This is a hymn of bereavement – that desolate feeling of loss of life and loss of love that sadly touches us all. With the refrain that “we’ll be nothing but dust, dust, dust, dust,” it is possibly the most melancholic and wistful part of the album.

Atlantic considers a journey of joyful reincarnation as the subconscious mind moves from this world to the next. It has an upbeat chamber music character, with repetitive stabbing synths, the sound of violin strings and impish “I, I, I, I, I don’t know why I get wild” vocal refrain. To my ears there is a real echo of Kate Bush’s Cloudbusting here, as the song marches on in joyful steps, with some well-judged acoustic guitar towards the end. Chrissy often says she uses her voice as an instrument, and it is demonstrated well on this track.

Translucent is an intense track with almost heavy metal guitar riffing joining the chorus, as the lyrics tell the tale of mental illness, murder, love and hate. Chrissy explains, “Obsessed with his lover, he loses touch with reality and kills her in a fit of rage. Then while contemplating her lifeless body and his own actions, he glimpses his own image in the mirror and turns his feelings on himself committing suicide in a desperate attempt to join her in her new life.” Keyboards and acoustic guitar add contrast to the driving beat in this darkly Gothic tale, and the track has a truly epic feel despite its relative brevity.

Raise Your Heart is a wonderfully bright and uplifting contrast, set to be a highlight when played live, with chiming bells and a thrusting beat, along with a fresh guitar pattern punctuated with stabs of guitar chords and rich keyboards. The song considers the journey from dark to light through the ‘veil’ that separates this life from the next, and a rebirth into the light. Chrissy’s rousing chorus is vibrant and hopeful, with wonderfully catchy vocal harmonies:

That would usually be the inspirational end to any album, but Rick and Chrissy have one more trick up their sleeves. The Flood is truly epic and wonderfully moving. It deals with the surrender to an inevitable greater power. It tells an exhilarating apocalyptic tale of the end of the world, with a woman calmly waiting for it in her room, whilst outside the evils of the world continue – but all set to be washed away by the powerful rain falling across the Earth. The piano-led first half of the song is sad, unsettling and pensive, as Chrissy’s delicate, fragile vocals chronicle events outside her window, but she repeatedly and defiantly states:

But as the world falls apart, the introduction of soaring and hopeful instrumentation, notably a wonderful, uplifting electric guitar solo from Rick over lighter keyboards leads us to a joyous climax, which reminded me of Dave Bainbridge and Iona – with the harmonised vocals reminiscent of Joanne Hogg – through to lush strings and the peaceful sound of birds as we all reach a rebirth and arrival in Hotel Utopia. It is definitely another goosebump-raising moment amongst many on this album. 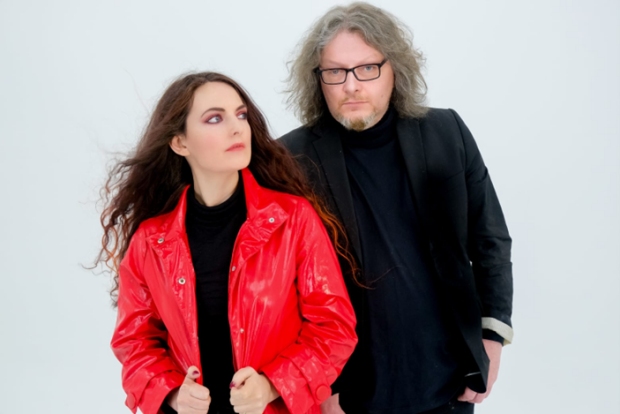 Hotel Utopia sees The Blackheart Orchestra reach another artistic level, with their most consistent, mature and expressive release to date. The multi-instrumental interplay between the duo is stunning and Chrissy’s vocals have a confidence and deep emotional content throughout. With a lyrical theme focusing on the many aspects of the afterlife, it is a challenging, diverse, genre-breaking and rewarding journey and gains stature and depth the more you listen to it. Moments of happiness and sadness sit next to each other, and for those who have loved and lost family and friends of late, it succeeds in providing a sanguine and inspiring comfort and feel that only truly special music can provide at times. For this talented, hard-working and constantly touring duo, I do hope this impressive release will bring in new listeners – from all musical backgrounds – into their ever-growing fanbase. They certainly deserve it!