After an earlier cancellation forced by COVID in 2020 (remember?), Big Big Train (BBT) finally finds itself at the city theatre of Zoetermeer in the Netherlands two years later, although as part of a tour shortened by force majeure; another setback for the band resulting from the cancellation of the HRH Festival in Leeds, resulting in a mini tour of only two shows in the UK (in Eastleigh and Aylesbury) and this one in the Netherlands. There is also the absence of new keyboardist/singer Carly Bryant, replaced this evening by Oskar Holldorff, not to mention the unexpected and deeply mourned death of singer/composer David Longdon at the end of 2021. But the band is picking up the pieces once again, with some new blood and two albums from which nothing has yet been performed live.

The support act was Dim Gray, the band of keyboardist/singer Oskar Holldorff. A talented band with potential, that certainly applies to the previously mentioned band leader, but guitarist/singer Håkon Høiberg also appealed to me. The music is a bit Oak, a touch of Tears for Fears and a whisker of Steven Wilson, delivered in a catchy way. We will certainly hear from this Norwegian band in the future.

Master James of St. George is a great opener, new singer Alberto Bravin immediately showing what he has to offer. There is also new material with Made From Sunshine, which gets a somewhat messy rendition. The First Rebreather, on the other hand, is simply breathtaking while Atlantic Cable from the penultimate album even has some sparse hard rock moments.
Bravin proves that he is also a good frontman with his funny introduction to The Florentine: Nick D’Virgilio (NDV) was amazed. Together with Rikard Sjöblom, NDV will take the spotlight for a beautiful acoustic version of Telling the Bees, a moving ode to Longdon, including audience participation. For Hedgerow, the quartet of wind players once again take their place, with Claire Lindley’s violin and voice also taking the lead. 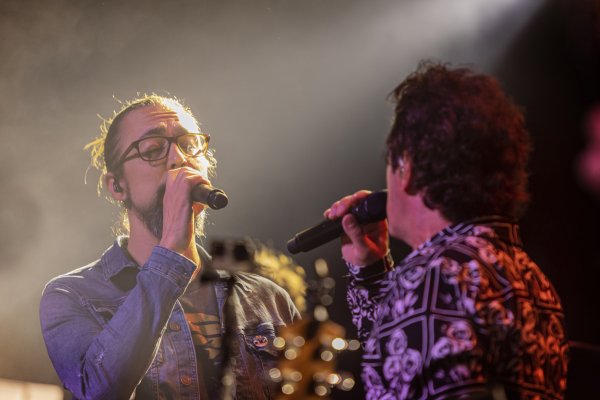 Another new song, Bats in the Belfry, and we can spot three keyboardists making music at the same time, the horn section and especially the drums providing plenty of tension in this instrumental song. The horn players are given an introduction in the traditional way by NDV, after which he plays his customary drum solo. Last Eleven is the band’s most recent song, it can’t be found on an album as yet and is the first song with Bravin as lead vocalist. The four-way vocal harmonies are fabulous, I very much like this new musical direction. The Transit of Venus Across the Sun is a true classic with a special role for the violin, while the epic A Mead Hall in Winter contains several duets, including violin versus keyboards and mutual duets between the keyboardists. And once again those wonderful multi-harmony vocals and heavenly brass parts. 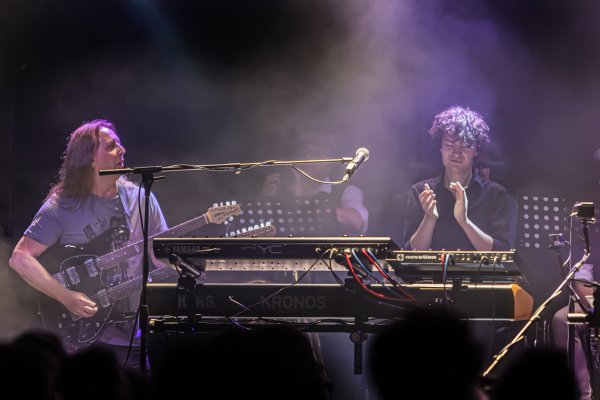 The instrumental Apollo is a fantastic mixture of jazz, prog and folk and offers ample opportunities to everyone for soloing. After about two-hours of playing, the band briefly leaves the stage, eventually returning for the encore to loud applause. And it’s quite an encore: East Coast Racer turns out to be the big favourite, the title rings out from many throats after Bravin’s shout for requests. We are presented with a dazzling version of the great epic story of the record-breaking blue train. With a raging solo from David Foster, finally – he’s apparently kept his powder dry until the very end. Alberto Bravin’s final high notes literally come out of his toes but he manages to finish in grand style. His audition piece for BBT also turns out to be the last song of the night.

For more than two-hours and fifteen-minutes, these gentlemen plus one lady managed to raise the roof. Time really seems to fly, leaving behind a deeply impressed, breathlessly watching and listening audience. More than 500 spectators just had the night of their lives, despite the unusual Monday and the fact that many would still be on the road for hours to their various homes. I dare speak of a memorable concert, this will be talked about for a long time, in the trend of “I was there at the time”.

This must have been the feeling that those in attendance when Yes played a warm-up gig in June this year had, in front of roughly 400 had people in a small club in Tavistock, Devon. Finally playing for a Dutch connoisseur audience that has been waiting for this one show by BBT for years, it’s a super enthusiastic audience too; at times you could hear a pin drop, at others the applause erupted into an orgy of noise. The fans clapped their hands together, sang along loudly and went crazy with versions of the well-known songs. The stay-at-homes are wrong, not for the first time. 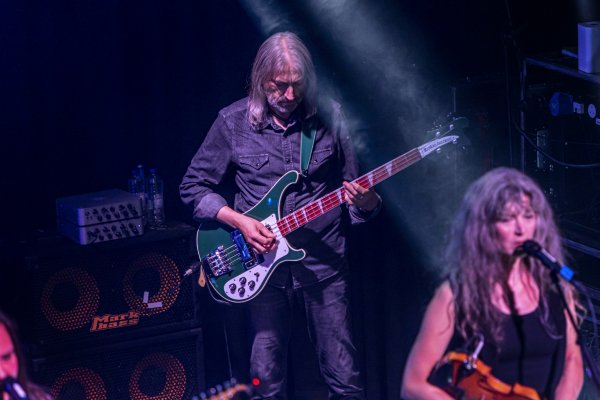 Bandleader/founder and the only remaining original member, Greg Spawton, stayed out of the spotlight, as always, in the smallest corner of the stage, solidly and above all melodically playing the bass parts and pedals and watching from the corner of his eye. And he saw that it was good. Nick D’Virgilio, in my opinion, was much less prominently present than before, especially during the first part. The sound of his drums were just a bit too loud; singer Bravin sometimes had trouble getting through. That was only a small blemish on an otherwise perfect evening, light and sound were in excellent order, the latter partly thanks to eighth member Rob Aubrey, the experienced permanent sound engineer of the band. 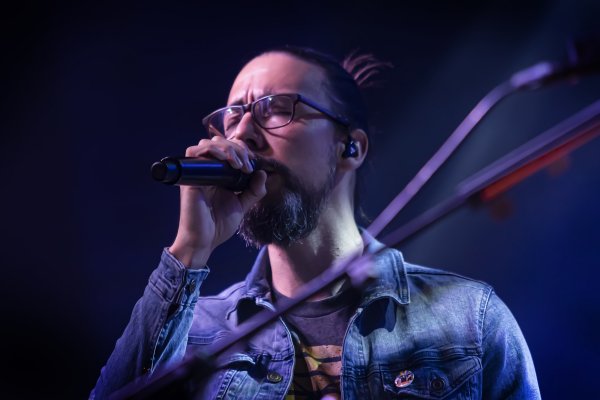 Compliments to the talented keyboardist and singer Oskar Holldorff, who played his complex parts with great passion. Partly because of him, at times even five-part harmonies were possible. Sign this man on quickly would be my advice. New vocalist Alberto Bravin also deserves extra compliments, he had the difficult task of replacing the beloved and lamented David Longdon and succeeded brilliantly. Surely, he has a different voice than his predecessor, but it was never the intention to find an epigone. His voice, but also his stage presence offers several leads to secure a bright future within the band. The fact that he also produces some fine tunes on both keyboards and guitars may also play an important role.

Clare Lindley played a solid role, both in terms of playing the violin and vocally. The former also applies to guitarist David Foster, he rarely appeared in the limelight and many solos turned out to be taken on by Rikard Sjöblom. The latter may very well be called the big anchor point at the front of the stage; on vocals, keyboards (organ!) and with strong guitar soloing the Swede once again impressed. This time the Big Big Train brass ensemble was reduced to a quartet. As always with Peaky Blinders caps, luckily the tweed jackets were left at home on this warm late summer night in Zoetermeer. The crew of experienced filmmaker John Vis was present for the recording of a possible DVD/Bluray. That would make a worthy document of a memorable evening. 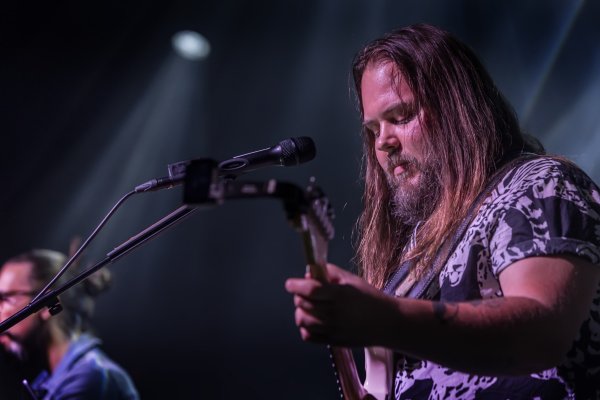 In my opinion this is the most ‘loose’ version of the band I’ve seen perform so far, more rocking than ever, more dynamic too. With a Norwegian, a Swede, an Italian and an American on stage, it is increasingly becoming a United Nations of Music and less ‘quintessentially English’. This is in fact Big Big Train Mk III, after the version with Longdon and the period before his entry. This is not a continuation of the old band but a renewed, reinvented version. With more balls too, pardon the expression, with more drama and especially younger, this one could last for years. I can’t wait for new material, scheduled for 2023. The train passes the station, shifts up a gear and continues the journey.

SETLIST
Master James of St. George
Made From Sunshine
The First Rebreather
Atlantic Cable
The Florentine
Telling the Bees
Hedgerow
Bats in the Belfry
Last Eleven
The Transit of Venus Across the Sun
A Mead Hall in Winter
Apollo
~ Encore:
East Coast Racer