Robin Armstrong’s imminent new Cosmograf album, Heroic Materials, focuses on environmental concerns, which seems particularly timely in a summer in which the UK has seen unprecedented temperatures and drought has been declared. Describing this album in that way may seem rather dry (pun intended) but would not do it justice. In truth, Heroic Materials is ultimately an album about love – a deep respect and love of a disappearing age of ‘beautiful machines’, but also crucially a realisation born out of a love of the planet and the future that things simply have got to change.

The previous Cosmograf album, the excellent Rattrapante, was inspired by a contemplation of temporal matters, and in some ways Heroic Materials takes a look at the issue of the changes we have to make with a similar a temporal approach, through the lens of the memories of 99 year old William ‘Billy’ May. Robin Armstrong has explained the interesting device he uses to reflect on these issues: “The story centres on a World War II Spitfire pilot who laments a lost golden era, but reflects that the human race must change its ways in order to preserve our existence on the Earth.”

Heroic Materials is very much a concept piece with each song interlinked with the next in the cycle, and is best considered as a whole narrative. Some sections are shorter, such as Industry, a linking section between the much more expansive set-pieces of the title song and British Made. Characteristically, this Cosmograf album is a sonic landscape, mixing gloriously played rock passages with evocative sound effects and samples, including the unmistakable sounds of a Spitfire Merlin engine, which is guaranteed to get most British listeners of a certain age feeling rather misty-eyed with nostalgia and awe. I Recall introduces us to the story with the sound of a TV news broadcast, with the atmospheric sound of rain and distant thunder in the background, informing us of plans to try to achieve a ‘green industrial revolution’ aiming at ‘Net Zero carbon emissions’. Across that background we hear a sole piano and painfully melancholic vocal from Robin Armstrong intoning:

There is a real sense of sadness for this elderly man that a golden age of engineering is passing as he nears the end of his own life, but with building string sounds and the roar of the Spitfire we go back in time with Billy May to his days as a fighter pilot in the three-part Heroic Materials. There is a real affection for ‘a beautiful machine’ in the first section. In Robin Armstrong’s fascinating sleeve notes he states that the Spitfire was ‘a hastily constructed instrument of war, but yet so beautiful and elegant in design. There is no need for the Spitfire anymore, but our love for it has endured and left a permanent imprint on our culture.’ Indeed, in some ways the Spitfire itself is seen as a ‘Hero’ in itself and totemic in British culture. Therefore, the whole concept of Heroic Materials has multiple layers – it is not just about ‘The Few’ who flew those fighter planes to resist Nazi invasion. It is also about our emotional attachment and sense of connection to mechanical or electronic creations such as cars, trains, planes and toys which were often so beautifully designed and crafted. As Armstrong states, they take up a ‘nostalgic place in our mindsets’ and ‘always stay with us because they remind us of a time passed’.

Armstrong as usual takes on the great majority of the instrumental duties on this album with his customary touch and skill, alongside his usual drummer, the classy Kyle Fenton. Robin did intelligently draft in his old live bandmate from his days with Big Big Train, Danny Manners, who plays some wonderfully flowing piano on the title track, which appropriately helps give it a sense of light and air in places. The sense of greatness associated with the Spitfire is evoked by rising, sweeping organ sounds and as the Spitfire engages with the enemy a short but majestic guitar solo appropriately climbs skywards on a wave of drums, bass and keyboards. Over a powerful backing the flights of electric guitar paint sonic pictures of swooping, soaring fighter planes – like I said, there’s a real love for this object which oozes from every second of this piece.

British Made is one of the standout songs and also touches on another subject which Robin Armstrong clearly loves – classic cars. The iconic imagery for this song comes from the ’60s E-type Jaguar sports car, and in his sleeve notes Robin explains that such vehicles outshine modern electric vehicles as they were ‘beautiful’ and ‘made in an era where form was dictated by an emotional response to the art or the design, not the result of crash tests and computer optimised ergonomics’. Armstrong manages to make sound evoke physical form as halfway through this piece he accelerates with an electric solo which purrs along with the power and majesty of an E-type – as soon as you hear that solo you can just see the car roaring away. 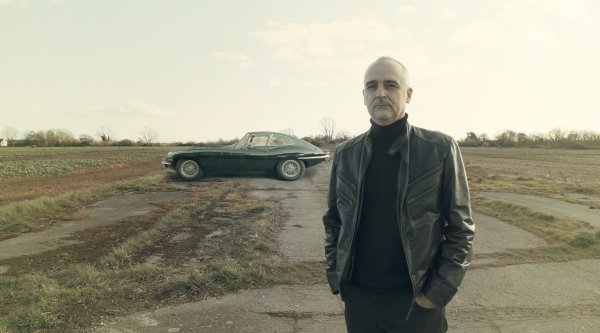 In previous Cosmograf reviews I have touched on Robin Armstrong’s background as a craftsman specialising in the precise repair of classic watches, and have used that as a way to underline his musical approach, in which he so skilfully crafts his music with such precision. All that remains true with Heroic Materials, which is again written, produced and performed with consummate skill and artistry. However, that is almost a ‘given’ for Cosmograf now (although not taken for granted). What should really be focused upon is that what makes a Cosmograf album stand out is not just the craftmanship, it is the emotion and sense of meaning that Robin pours into his concepts, lyrics and his distinctive and clearly deeply felt vocals. Heroic Materials is suffused with emotion, such as the finale of the title piece in which the nostalgic pilot sadly looks back, or in the piano-led lament Mary where he remembers his lost war time love. Armstrong really puts his soul into these songs.

Heroic Materials changes in perspective with the brief, mainly piano and vocal Blinkers, a beautiful interlude full of yearning, mixing the difficulty in accepting the need for change, but knowing it should happen. If Things Don’t Change starts off in a distinctly fragile Steven Wilson-esque tone before opening out with some remarkable falsetto vocals from Robin and a relentless guitar and organ riff as the central character realises what needs to happen, a Floydian guitar line taking us into the mournful The Same Stupid Mistake. In the sleeve notes Armstrong outlines his fear that we are in danger of repeating our mistakes with a drive to new supposedly more efficient ‘greener’ technology, but still burdened with our desire for ‘new’ things in which technology has a very short shelf-life, so we continue to consume at an unsustainable rate. Talking of the sleeve notes, it has to be said that the high-quality art and design of this package makes it a thing of beauty, and along with the lyrics and engaging liner notes this is clearly a release worth getting in physical format, including a deluxe media book edition and vinyl.

Back to the music, and the sound of a Spitfire engine soaring over with a gorgeous guitar motif takes us right back to the beginning as Billy May reminisces in Regretful Refrain, wishing he had made better choices. The circle is completed with the bookending A Better World which initially is very much in the style of the opening I Recall as Armstrong’s fragile voice lays out an alternative vision looking forward:

“This is what is left, it’s down to you,
The world you left is dead, what shall we do?
It’s goodbye to the skies of blue, they poisoned you,
The seas and rivers too, I loved you
But it’s time to cease the blame, I still love you, rebuild it all again,
That’s what we’ll do, I wish you were here too, we’ll make it new”

Robin Armstrong continues to demonstrate with each Cosmograf album that he is undoubtedly one of the most talented progressive rock artists of the last decade or so. Heroic Materials is brave in concept, addressing one of the most important subjects of our times, beautifully delivered with a beguiling mixture of power, fragility, craftmanship and soul. Like its fighter pilot hero, Heroic Materials will deserve to fly high, and come to be regarded as one of the best progressive rock albums of 2022. 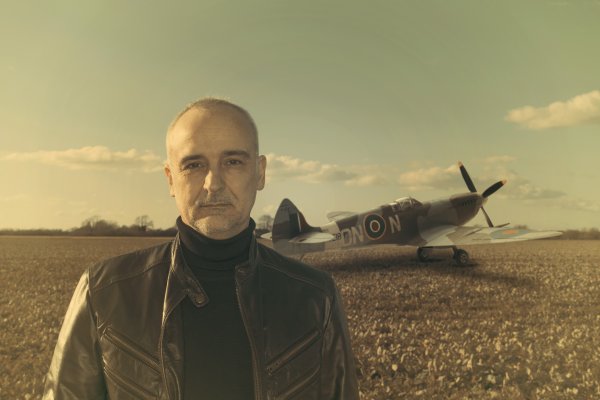