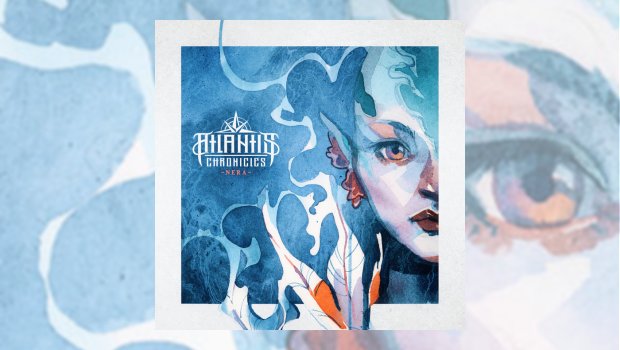 With the simultaneous explosion of popularity in both video games and streaming, the phenomenon of speedrunning has never been more popular than it is now, with pro speedrunners streaming their attempts live for curious fans to watch at home. Speedrunning is the exhausting art of trying to beat a game as quickly as possible, occasionally with various restraints. Players have to perform perfectly timed button combinations and use quick thinking when something doesn’t go according to plan. Watching a speedrun can be utterly breathtaking as you feel some of the residual adrenaline of watching someone exercise their complete mastery of the controls.

I say all this because this is the only thing I can relate the feeling of listening to Atlantis Chronicles to, as these musicians perform melodic death metal with an almost comedic level of complexity and speed. Death metal has never been a particular draw for me and when I reviewed Meshuggah’s Immutable two months ago, it took me several attempts to even find my footing with that unrelentingly dark album. Nera is a completely different story; Atlantis Chronicles’ melodic element helped to draw me in right from the intro to the anthemic Full Fathom Five.

In the hands of lesser musicians, this track would merely be catchy, but the band’s – and in particular, drummer Sydney Taieb’s – dedication to fitting as many eye-boggling notes and rhythms into each second of their music elevates this tune, and indeed the whole album, to another plane.

Nera is the Parisian band’s third album, following 2013’s Ten Miles Underwater and 2016’s Barton’s Odyssey. Fans of the band have been waiting a long time for this album, and teaser videos emerged nearly two years ago; one might speculate that the pandemic might have contributed to the delay in this album’s release. After waiting all this time, fans might be disappointed to see that this ten-track album clocks in at a slender 36-minutes – very unusual for a progressive album – but rest assured, Atlantis Chronicles play more notes in half-an-hour than most prog bands would in the space of a double album.

On a purely mathematical basis, it comes as no surprise that most of the album’s tracks are under four-minutes in length – again, we’re in unusual territory for prog. While this doesn’t allow for much space for any of the tracks to breathe – if you could even call it breathing with how head-poundingly dense each song is – it does mean that none of the songs outstay their welcome.

It should be noted, however, that the best track besides the opener is also the longest: We All Saw It Coming clocks in at just under five-minutes and benefits from a flamenco-esque acoustic guitar solo in the centre of the song. In an uncharacteristic move, the band don’t immediately start blasting again, but choose to build carefully back from this simple theme until they are playing at full volume once more for the final chorus. This is the only time on the album I thought the group sounded anything like Dream Theater and it was a refreshing change of pace.

Besides the opener and this standout track, the rest of the album does seem to run together somewhat, all of it dizzyingly fast, except for the brief instrumental The Great Escape, which acts as an intro for The Great Inscape (whatever that means). The short track lengths become a hindrance to actually getting into the album, at least for this prog fan. The band also don’t seem to be able to recapture some of the catchiness that could be felt in the first half of the album.

One exception is The End Is Near, which feels like it could have been a great album closer, but is instead used as the penultimate track. Utilising female backing vocals, the chanted chorus could have been a memorable send-off, but we’re left with the more punk-sounding Fatherless Nights Ahead.

Atlantis Chronicles’ penchant of filling up bars with the most unusual rhythms whilst maintaining a breakneck tempo has to be heard to be believed. As difficult as it must have been to craft these songs, the hard work has paid off as AC’s ‘gimmick’ of complexity is undeniably their most endearing feature. There are a plethora of bands nowadays whose shtick is playing as fast as possible – the formidable Haken come to mind, as well as the younger Arch Echo, who I saw supporting Dream Theater recently – but the aquatically-themed band manages to endear even at this fast pace, because they temper those difficult rhythms with a keen sense of melody which prevent the proceedings from becoming too confusing. Even if you’re not a fan of death metal, you should still try this album; at just 36-minutes, Nera won’t waste your time.