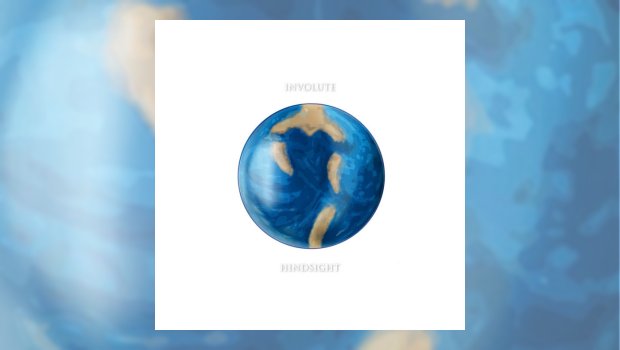 Once upon a time there was a prog metal band named Blind Spectrum. I really enjoyed their music, but could never get on with the vocals of Sean Butler. I always felt that they would be better as an instrumental band, or with another singer. My favourite aspect of Blind Spectrum was young guitarist Wyatt Mehmeti (and when I say young, he was not even out of his teens when Blind Spectrum’s album was released), who had some scorching runs and scalding solos. This guy was hot stuff! Older brother Eli Mehmeti was on drums and backing vocals, and joined in the rhythm section by Doug Faulkner on bass. Butler played keyboards far better than he sang, but it was no great surprise to me when Blind Spectrum failed to follow up their debut. Nor was it a great surprise when the Mehmeti brothers turned up again in a new band. What was a surprise was how much their musical aspirations and abilities have evolved.

Involute’s Hindsight may have been released only four years after the Blind Spectrum album, but wow, what a difference! As much as Blind Spectrum might have been on A Search For Reason, I think they may also have been on a search for their own sound. The Mehmeti brothers’ new band, Involute, mines the same influences as Blind Spectrum, but comes up with something far more original, and also far more accomplished. With only Wyatt and Eli from Blind Spectrum, the line-up of Involute is completed by Tom McCausland (on guitar with Wyatt), Julian Chipkin (bass), and lead vocalist Carina Kohn. As well as drums, and backing vocals, Eli picks up the synths. And the difference in his playing on the drums is incredible, and almost indescribable. He and Julian are in each other’s pockets, and you can tell that a lot of the composition comes from Eli. He is credited with the music for every track, sometimes with other members of the group, but more often as the sole writer.

One of the things I most love about Involute is the slightly off-kilter, and at times jazzy, rhythms the band play with – which again, is clearly led by the drums. Blind Spectrum played an enjoyable, but fairly standard, brand of prog metal. I enjoyed it four years ago, but if I came across it now I’m not sure it would hold my attention. There’s simply too much of that around. Involute, on the other hand? Well, take a listen to Jasper (the first track with vocals on the album), and maybe you’ll know what I mean. There’s nothing really conventional about the structure of this song. There may be aspects that in isolation would sound conventional (for example, the vocal melodies), but they are played over and against each other in a manner that is not quite discordant or dissonant, but comes as close as it can to that line without crossing it. Eli’s synth lines remind me of Mike Garson, whose runs are sometimes sublimely beautiful, and just as often crazily avant-garde. And I freaking love Eli’s drumming. Where Wyatt’s playing was the star performer for me (regardless of relative ability) on Blind Spectrum, it is Eli that holds much of my attention with Involute.

The band name is perfect for the sound of Involute, both in its common usage to describe something intricate, or its mathematical definition of a curve dependent on another. The way every member of Involute plays off each other is amazing. Even though they are not a math band, there is a huge amount of math rock to the way they play their prog metal. The intricacy of their playing, and more so, the way it interlocks, is simply entrancing. So, while I guess the band will still be bogged down with the prog metal tag, there is so much more to their sound. The band have given “fusion” as one of their Bandcamp tags, and it is entirely appropriate, for Involute’s sound is a fusion of prog metal, math rock, and jazz. At times, some of the more ambient passages even give a post-rock feel to the music. And, indeed, even if the band could never really be described as post-rock, they do seem to have composed their music in a post-rock manner – concerned more for shape over form, and texture over structure. Sure there are all the components of prog metal you might expect to hear, but they have been assembled in unexpected ways. Is this what happens when you have “just a couple of engineers, physicists, and a poet” make music? I don’t know, and I don’t care. I just know that I love it.

The Warden, at just over 14-minutes, has plenty of time to play around with shape and texture, and does so admirably – and yes, at times unexpectedly. There’s a section where it almost sounds like a paradoxically peaceful battle between broken beat and flamenco. Honestly, expecting the unexpected becomes almost so routine that I wouldn’t be surprised to hear trip hop, hip hop or dubstep in Involute’s music, and I just know it would be tastefully and beautifully integrated so that it didn’t sound even slightly out of place. I can imagine a prog metal fan going straight for this track because it’s the longest, and being quite bewildered as it really doesn’t go where one might expect. It’s that post-rock feel (though not sound) again, with the emphasis on shape over form and texture over structure. The Warden is probably my favourite song on the album, but there’s not a single track I don’t love. And, it’s not simply the length that gives it the edge, as the aforementioned Jasper is probably my other favourite, and it’s the shortest on the album. Involute simply know what best serves any composition, and none is longer (nor shorter) than it needs to be.

In that vein, I’m going to end this review as I began it, by addressing the vocals, because Involute is as diametrically opposed to Blind Spectrum as it is possible to be, for me. While Blind Spectrum might have fared better without vocals, Involute would suffer immeasurably without Carina’s wonderful voice. The ever-changing tapestry of technicality and poly-rhythms would simply be too much for many listeners, I think, without the lightness of touch Carina adds. There is no denying the proficiency, or even virtuosity, of the musicians, and I love the instrumental passages, but I also love the balance that Carina brings, and when she does. Again, Involute show that they simply know what best serves any composition; and again go for shape and texture over form and structure. At times the juxtaposition of Carina’s vocals and the underlying instrumentation almost seem to be going in different directions, but it works, and it works brilliantly. This is an incredible debut, and I very much hope that it will be the first of many great releases from Involute.