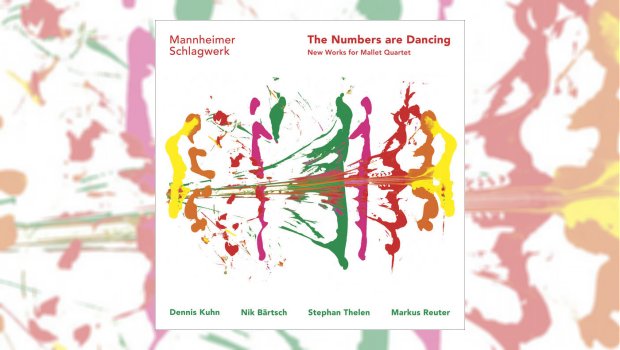 The Mannheimer Schlagwerk is a percussion collective which is celebrating its 25th anniversary. It was the brainchild of Dennis Kuhn, who created it to play a one-off event, but it has somehow endured ever since. The group is known for its consistently high class performances, and it has remained true to its ethos throughout that time. To join the ensemble, one must be enrolled in the percussion curriculum at Mannheimer University, and then apply and be accepted. They can then play until their studies are completed, so there is a continuous renewal of new blood. Despite the turnover, the standards remain very high, and the ensemble is world renowned. The one continuous element is Dennis Kuhn himself, who remains as the artistic director, and as such must be responsible for the continuous success of the group.

The first piece on this recording was written by Kuhn in tribute to his friend and fellow composer, the late Leon Milo. Leon’s House is an astonishing piece in three movements, although there is no actual gap between them, so they come over as one continuous arc of music. Kuhn readily acknowledges the influence of Steve Reich, and there are obvious parallels between this work and Reich’s mallet quartet. Structurally similar, they both begin and conclude with faster movements, and both have slow movements in between. In Kuhn’s case, the slow section is almost dream-like, but retains the heartbeat which pulses throughout the piece. The marimbas and vibraphones are recorded superbly, and dance around your head with a gentle touch which is at once soothing and energising. The first movement begins delicately, like the first drops of rain gradually building into a gentle shower. After the dream section, the concluding part builds to a thrilling climax and brilliant ending. Throughout, there is a thread of tension which unifies the piece. The detail in the repeated motifs played by each musician is deceptive in its complexity, and the precision with which it is performed is stunning.

Nik Bärtsch’s approach is rather different, although utilising the same instrumentation. His composition builds to a crescendo around the mid-point, then pauses and begins again in a similar way, ending with the marimbas and vibraphones beating out a tattoo in unison. This is stirring stuff. According to an interview in the accompanying CD booklet, Bärtsch explains the title of his piece: “The basic pattern of the piece is based on a movement in 11/4, which unfolds, and the elements of the cycle then branch out and split into a 7/4 rhythm.” Hence Seven Eleven. Well I’m sorry, but listen as I may, I find it hard to discern that detail. All I can say is that it has an unfolding beauty and energy which I find delightful and compelling.

The next two pieces are by Stephan Thelen, he of Fractal Guitar fame, but he clearly finds himself perfectly at home composing for different instruments. His pieces employ some additional instrumentation however, with Russian Dolls adding organ and clarinet, and Parallel Motion utilising two percussionists in addition to the marimbas and vibraphones. This apart, his compositional style is quite different. Kuhn refers to him as “the mathematician”, and he does seem to have an approach which is quite rigid in the parameters he sets for himself. However, this doesn’t mean his pieces have no soul, quite the opposite, and yet Thelen’s background (he is a mathematics professor in Zurich) means he brings a quite different perspective and discipline to his work. Russian Dolls sounds demanding of the musicians, not least for Nawon Lee, the clarinet player. Having to play continuously for nine minutes in tight unison with the marimbas and vibraphones, all underpinned by the organ must have taken tremendous concentration and stamina. I’m sure there are elements here which bring to mind Mike Oldfield, but wonder whether the nod was deliberate? Whatever, it’s a wonderful nine minutes, and with only a brief pause we begin the roller coaster of Parallel Motion, which is propelled by drums and percussion augmenting the mallet instruments. It sounds like a train which is threatening to run out of control, but is somehow kept in check. Just. The tempo then abruptly slows to a walk, as if to reveal just how the piece is constructed before picking up the momentum a few minutes later and hurtling towards the end of the line.

Finally, we come to Markus Reuter’s piece, Sexgott, split into three movements once again, but three distinct movements this time. Returning to the mallet quartet format, this piece echoes some of the sense of mystery which characterises the opening of Kuhn’s composition. Gone is the exploration of rhythm for the first two movements, instead the players seem to be probing, searching, playing their allotted parts in apparent isolation. The third movement in contrast seems to pull the thread of their parts together into a magical dancing tapestry. Reuter has written the most abstract work on this album, but it is readily accessible and thought provoking.

And then it’s all over and you have to hit play again, because this is an album that will demand repeated listening, as each pass reveals new detail and complexity which remained hitherto hidden. This music might not appeal to all, but if you enjoy the meditative quality of Tangerine Dream, the gradual building of cycling loops like Oldfield, or the minimalism of Reich, then this will be right up your street. The musicianship is exemplary, and the composers have used completely different approaches, but each writing pieces which sit together in an agreeably complementary way. Simply stunning.