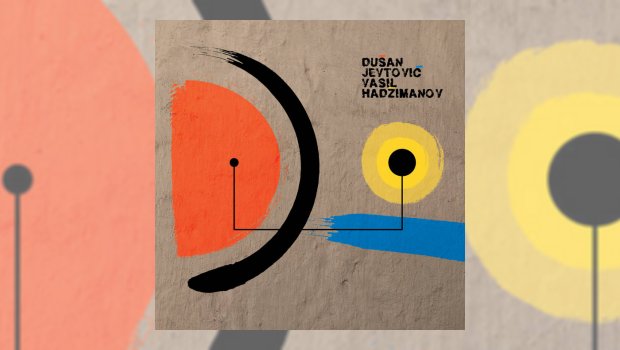 Listening to this album for the first time, from the first notes I knew I was in love. That reaction wasn’t unexpected, as the previous albums from both Dusan Jevtovic and Vasil Hadzimanov that I have (If You See Me and Lines in Sand respectively) are superb. But it did make me wonder if I were the right person to review this album. Even at the best of times, reviews are a very subjective affair, and it can be difficult to remove any personal bias. But here I am, having been a fan of Jevtovic’s guitar playing for quite some time, yet this is absolutely my favourite of all his albums I have heard. I’ve not been acquainted with Hadzimanoz for as long, but again, this is absolutely my favourite of the albums of his I have heard. While the pair played together on Jevtovic’s No Answer, the lack of drums on DUO gives this album a completely different sound – and it’s amazing. I made a comment on my Facebook page after first listening to DUO, where I came to the conclusion that if my lasting impressions are as favourable as my first then it will easily be a contender for my favourite album of the year! More than a month down the line, and my feelings remain unchanged. If anything, I am perhaps more enamoured.

DUO begins with the immediately engaging and captivating Searching for New, and the title is apt, for as much as these two have recorded and played together already, DUO feels very much new, unexplored territory. From the outset, one of the most amazing things I found about this album is how effortless it sounds. The pair, playing together with a relatively simple setup, make the music of DUO sound a lot easier than it must have been. Playing in a duo, there is no backup to carry the melody while Jevtovic and Hadzimanov play off and against each other. Effectively, the pair are playing melody and counterpoint at the same time. As the two search for new, you can hear the guitar and piano echoing motifs, building upon each other. It’s a truly glorious opening number that immediately embeds itself under the skin, and makes the hairs rise. The percussive rumble of the lower notes on the piano forgoes any need for drums. The interplay between the two instruments on this track, and the impact it has as an opening number, have kept it a firm favourite of mine.

The title of Searching for New also evokes the notes for Jevtovic’s 2019 No Answer where, I believe, Hadzimanov first played with Jevtovic. The absence of a bass player then (and of drums also, now) opened “new dynamic possibilities and allow[ed] the guitar and keyboard voicing to dance and weave in a textural ballet. Vasil’s beautiful arpeggiated piano serves as delicate counterpoint to Dusan’s raw textured playing.” The greatest difference on this album is that the pair each take their turn in the spotlight, or share it. Each play both beauty and the beast, and they do this wonderfully. They explore melody and dissonance, light and heavy, dreamy and nightmarish, and move from one mood to another with such fluidity that there is never a jarring moment. It’s one of those albums that I’m happy to let wash over me, and as if to prove it, the following track does pretty much just that.

Olas de Anhelo has an almost chamber sound to it, with beautiful piano playing from Hadzimanov, and Jevtovic often making his guitar sound almost like a violin. This was the first number released from the pair, all the way back in 2019. I love the way the music rolls into the listener in gentle waves. Have you ever taken just a few steps into the sea, so it is maybe lapping at your ankles? If you stand there, as the last, calm, remaining vestiges of waves come and go, moving the sand with them, your feet slowly sink into the sand. This number, for me, is the aural equivalent of that sensation. It’s gentle, becalming, and although the sensation is ever so slightly odd, pleasurable. It’s easy to lose yourself in Olas de Anhelo, but Comes Back From Yesterday pulls us back to reality, with both Jevtovic and Hadzimanov playing some of their most menacing tones. Hadzimanov grounds the piece, while Jevtovic soars over the top.

El Raval brings back those violin tones of Jevtovic, but this track sounds nothing like Olas de Anhelo. Where that track was gentle, light and breezy, like a day at the beach, El Raval takes you down a dark alley at night. It’s heavy, malevolent and full of threat. And yet, as the tension builds, ultimately instead of a crashing climax, the threat dissipates towards the end, with a quite beautiful piano passage. It reminds me of a (very) long time ago, walking home in the dark, and I can hear the exact moment I got to a certain point nearer my home where I felt safe(r). Honestly, this is another reason I love this album so much. Instrumental music can often (and some might say, should often) evoke imagery in the mind of the listener, but rarely have I listened to instrumental music where the imagery is so vivid. That this is achieved with such impact by “just” by piano and guitar is quite impressive.

I could go on to describe all the tracks individually, but it would make this review longer than it already is. So I’ll skip to the closing number, Gypsy, which is as impressive and impactful as the opening number, bookending the album in an understated but quite spectacular manner. If Jevtovic and Hadzimanov were searching for new, they’ve found it here – as this track is almost nothing like anything that has preceded it here. It has an almost post-rock vibe, and sounds far more spacey than any Space Salchica (and far more meaty, too!). Gypsy is the only track on the album that feels like it ends prematurely. Not a single track feels too short (or too long, for that matter), but this one. However, it works to the album’s advantage, because when it ends, and the listener is plunged into silence, it really packs a punch and leaves a lasting impression. As strange as it might seem, I’m glad it ends when it does, because it wouldn’t have the impact it does otherwise.

Throughout DUO, from the opening number to the closing, Jevtovic and Hadzimanov have presented a perfectly sequenced album that is impossible not to be swept along by. Having thrown myself into the current, to be taken wherever it flows, it feels almost like I’ve been rather unceremoniously dumped at the end. But this is not a criticism at all. To change the metaphor, but retain the watery theme, it is like splashing down at the end of a hydro slide. Unceremoniously dumped, but the ride has been a blast, and it’s straight back up to the top to take to the slide again. As I said in my review of Jevtovic’s If You See Me album from last year, “nothing to do, but play it again…”