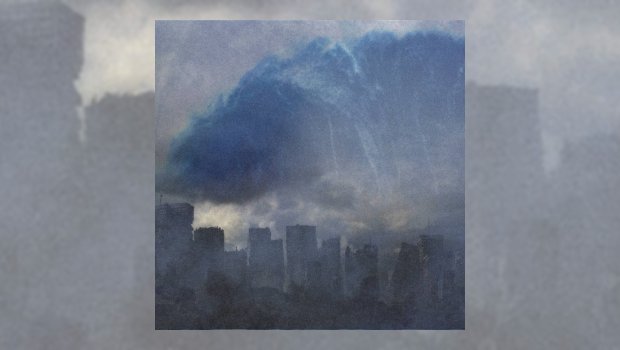 According to their Bandcamp page, postcards from new zealand (all lower case) have been making “rhythm and noise since 2008”, but this year when their latest release found its way into the TPA review queue was the first I’d heard of them. The title indicated this was the third volume of a series called we watched them devour, so before listening to city islands, I decided I’d better start at the beginning, which was trickier than it seemed: volume 2 of we watched them devour was volume 3 of the viral trilogy. Not only that, the first volume of we watched them devour begins with the track we watched them devour, pt. iv, with the first three parts featuring on another release, cold, and far away. After listening to four releases from postcards from new zealand before I even reached the one I am supposed to be reviewing, I guess I have a handle on their sound, and I have to say it’s one I really like. It’s not an easy sound to pigeonhole by genre, but often the music that most interests me isn’t.

One notable difference from the earliest album I listened to, and the more recent, is that it features vocals. Perhaps this is why, as their first fully instrumental album, volume 1 of we watched them devour begins with part four? Regardless, the sound has not changed dramatically, apart from the lack of vocals. I have to admit that I prefer the music instrumental, as the vocals are often so tortured and pained that the sense of discomfort they exude is almost too much for me to bear. It sure adds to the tension, though. postcards from new zealand remind me at times of High Dependency Unit in being able to create pieces of both exquisite beauty and menacing heaviness. I guess, vocally (when they appear), there can also be comparisons drawn with HDU. But ultimately there’s not a great deal of similarity between the two bands, postcards from new zealand reminding me of HDU rather than sounding like them, but given that HDU are easily one of my most favourite Kiwi bands, that I’m comparing postcards from new zealand with them at all shows how impressed I have been by their music.

One thing I like about postcards from new zealand is the way they can slowly develop tension, and then turn on a dime and suddenly deconstruct the aggression. There is a real sense that they are telling a story, with several twists and turns. This leads me to another comparison, Italian group Juggernaut, who describe their compositions as “threatening music [and] harmonies of disappointment.” While the instrumentation of the two bands is vastly different, they seem to create soundscapes of a similar nature, oozing with emotive and affective vibes. postcards from new zealand and the other two bands I’ve mentioned probably tend to be described as post-metal, but they all play it in an experimental manner that by-passes a lot of the abrasive heaviness and drab aesthetics of the genre, injecting a levity and groove along with some cinematic flair. At times there’s almost a dub feel, and it works. One more band I’m reminded of is Switzerland’s The Young Gods.

From what I gather, postcards from new zealand is an anonymous collective that has seen several changes in its line-up, with only one person being a consistent member from the beginning. I guess the different people that have come and gone are part of the reason there feels like so many influences coming though the music. I believe the band has played live only once, in 2018 to celebrate their tenth anniversary, and the identities of the members was kept hidden. But whomever makes up postcards from new zealand these days, the coronavirus pandemic seems to have ignited something in them, with five albums having been released since March last year. the viral trilogy (no prizes for guessing which virus) is really interesting, with three very different takes on electronica. My favourite of the three is probably the second volume, but all are highly enjoyable. As mentioned, volume 3 of the viral trilogy is also volume 2 of we watched them devour, and it recalls the desolate and dissonant industrial ambience of the previous parts, while at the same time providing a wonderful coda to the viral trilogy – the morning after, indeed…

Which brings us, finally, to the album I was given to review, the twenty-second(?) release from the Kiwi collective. And it’s marvellous. Of the postcards from new zealand albums I have listened to so far, city islands is possibly my favourite so far. All the contrasts of their previous albums are brought into one not quite homogenous whole, full of dynamic atmospherics and plenty of shifts and changes. And while I suggested that the collective’s sound has not changed over the years, their execution has. There is a world of difference in the quality of the composition and musicianship between earlier postcards from new zealand and this latest offering. I’m engaged from the very first industrial throbs of as the towers crumbled. Even at it’s most harsh and unrelenting (snow and sand), city islands is easy – enjoyable, even – to listen to. tortuous unwinding leans towards math rock, with some really lush rhythmic work. There’s a fluidity to the unpredictability of the piece that feels almost watery. It reminds me of the unpredictability and brutality of playing in the surf at the local beaches of my hometown.

Whether because of the memories it evokes, or just because it’s a damn fine tune, tortuous unwinding is probably my favourite piece on the album, though the following ocean avenue does come close in my affections. That watery feeling from the last track is carried over into this one, but it’s far calmer with a feeling of floating atop the waves, rather than being pounded by them. ocean avenue somehow manages to remain calm for its entirety, yet also over its length acts almost as an overture for the album, bringing together a subdued reflection of the styles, if not the full assault of sounds, of the individual tracks that make up city islands. It almost feels like an evocation of that old chestnut “no man is an island”, in the way it draws together the various islands into an archipelago of sound. Before I know it, it’s the final track, it just kept coming, but what a magnificent closing statement. If you like post-rock, post-metal, post-industrial, post-punk – post-anything really – then give postcards from new zealand a listen.