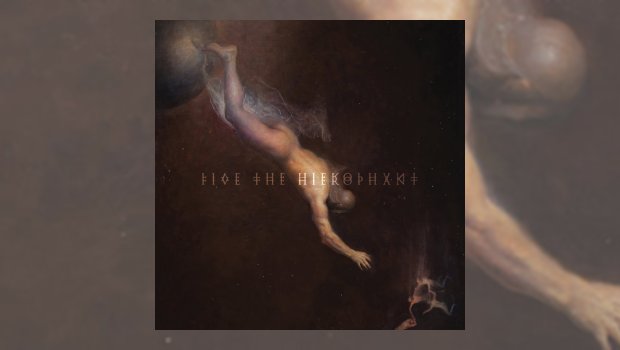 Five The Hierophant – Through Aureate Void

“The Golden Void speaks to me
Denying my reality
I lose my body, lose my mind
I blow like wind, flow like wine
Down a corridor of flame…”

…Through Aureate Void. I admit it, before I heard a note, the title of Five The Hierophant’s latest album put Hawkwind’s Golden Void in my mind. And, after listening to this album and losing myself in its great depths so many times since, I think it’s not a bad comparison to make. Hawkwind is one of many bands that Five The Hierophant remind me of, although they never sound like any of those. I had never heard of the band before they featured on the 11 Years of Chaos compilation, but I was instantly enamoured. The band mix a primordial soup of musical styles to their own unique recipe. The ingredients include black, dark ambient, doom, drone, industrial, jazz, noise, post rock/metal and psychedelia, which gives you both every idea and no idea of what they sound like, and that is how it should be. Actually, what the band came across to me as is spiritual. But not just spiritual, shamanic. Of course, I realise that I am making inferences here, for which I have no evidence, but there’s something about Five The Hierophant’s music that seems to encourage the listener to interpret their own path through the Golden Void, so I don’t feel too bad for doing so.

So why shamanic? Well, I could say that I was given a clue by the name of the band, since ‘The Hierophant’ is a tarot card also known as ‘The Shaman’, but I would be lying – I know that only because I Googled to see if there was a connection between the two terms. Rather it is because of the deliberate monotony and repetition used within the music, which is reminiscent of the simple repeated drones and rhythms traditionally used by shamans to take them out of their bodies, out of their minds, and on their shamanic journeys. The album eases the listener/traveller in gently with Leaf in the Current, and like a leaf gently bobbing about and floating on that swirling current, we are off. The drums pound. The sax squalls. It’s atmospheric, but in the manner of a soundscape, not a soundtrack. I doubt you’ll find that overused cliché adjective cinematic used to describe this album.

And the sounds? Well, as I’ve already mentioned that Five The Hierophant remind me of Hawkwind, I may as well mention some others: Angelo Badalamenti, Boris, Coil, Ornette Colman, John Coltrane, Dark Buddha Rising, King Crimson, Merzbow, Oranssi Pazuzu, Ottone Pesante, Pharaoh Saunders, Pink Floyd, Superfjord, Swans, Tool and Van der Graaf Generator. I could probably go on, but hopefully you get the idea. Underneath the heavy exterior is a magnificent melange of musical matter.

“Chaotic fusion’s of your soul
Down below that rocky knoll…”

I keep quoting lyrics from Hawkwind’s Golden Void, and that is probably a little unfair as I don’t even know how much (if any) influence Hawkwind have on Five The Hierophant. It’s also unfair because Through Aureate Void is a largely instrumental album. There are passages of spoken word, but they are few and low in the mix – more another sound in the mix than the focal point that vocals normally provide. Again, I get the impression that the band are leaving it to the listener to make their own interpretations, rather than to attempt to decipher the few spoken words. The music often sounds as if it has been – at least partially – improvised. I suspect that the band never reproduce songs live the same as they appear on an album, so the story is fluid, dependant on time and place. A removal from the here and now, every trip different depending on one’s starting point. I’m reminded of Superfjord’s In The Moment album, “where band and audience travel together through no one knows what exactly”. Five The Hierophant, for me, offer the same invitation.

For this reason, this review is fairly sparse on details of the actual music. I don’t want to describe that too much as it’s my individual take on the album, and it is up to you to make your own. Hopefully, despite how little I’ve described the music, I’ve intrigued you enough to take the journey yourself, and choose your own path. I’m even inclined to quote myself, from my review of Seaorm’s Olkhon: “Almost every number on the album has the potential for dual meanings, and I revel in the ambiguity this provides. I love the mystery and the magic, and the way the music can be interpreted in different ways. It’s suitably shamanic and spiritual, leaving listeners to take from it what they wish.”

The music will take you somewhere for sure, but where should not be defined by me, and I am fairly sure the band don’t want it to be defined by them either. So this is one of those frustrating and annoying reviews that tells you very little about the album. Suffice to say, the music of Five The Hierophant on Through Aureate Void is heavy and hypnotic. It’s menacing and mesmerising. It’s atmospheric and addictive. Honestly, it might sound like I’m laying it on a bit thick, but this really is quite an incredible album. Expect it to turn up in several best of lists at the end of this year. It is that good.