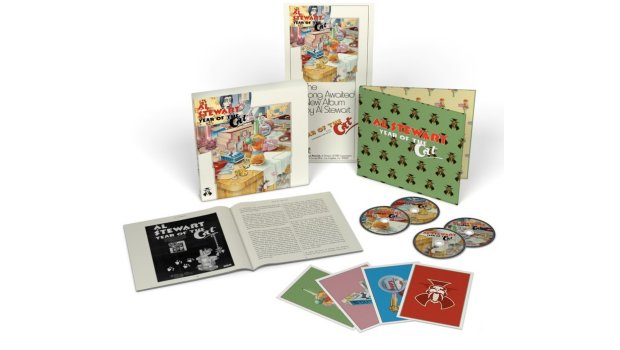 1976 – the Drought Year. I was 15, spending my hard-earned paper round money on some of the many interesting albums released that year. A prime one for me was the Gabriel-free Genesis and A Trick of the Tail, but there were many more. With the beast that was punk looming, this was the year of Hotel California, Presence, A Night at the Opera and Al Stewart’s The Year of the Cat.

Scottish singer-songwriter Al had come through during the folk revival of the ’60s and ’70s and The Year of the Cat was his seventh – and by far most successful – album, reaching number 5 in the US and selling over a million copies. The rich arrangements and Alan Parsons’ production were widely praised and have helped it to stand the test of time. By the time the CD Age came around, this was one of the select albums you dragged along to the hi-fi store to test system performance: If It Doesn’t Come Naturally, Leave It; Flying Sorcery; Broadway Hotel.

45 years on and the album is getting the deluxe reissue treatment with a four-disc boxed release on Cherry Red Records, remastered from the original master tapes by Parsons.

As well as the remastered album on the first CD, you get two discs of a complete show – previously unreleased – recorded at the Paramount Theater in Seattle in October 1976, plus a DVD with a 5.1 mix. You also get a poster, four postcards, a 68-page booklet and an immense amount of pleasure. Cherry Red really are good at producing these box set editions.

Mr Parson has done an excellent job, from the first notes of Lord Grenville to the previously unreleased Belsize Blues, he has lifted and sharpened the sound. It is still a great album, I won’t say timeless, but musically superior; a revisit is still a joy.

Al Stewart was recently interviewed by Johnny Walker on BBC Radio 2 about this celebratory edition, confirming that he didn’t get involved with the technical side of the remastering and just stuck to being a singer songwriter. Never having had a UK hit, it is perhaps surprising to note that he got to the number 1 spot in Albania, as well as having hits throughout the Western hemisphere with songs from the album. Sand in Your Shoes made number 29 in the UK.

I am reviewing the CD version, but I’m sure the 5.1 is equally glorious. On The Border is the second track, my favourite: tales of the Spanish Civil War, gun smuggling, and other nefarious deeds. The remaster fairs well, clearer, and sharper, but I loved it anyway.

There is a hint of Celtic to the tunes, but only a hint, and there are some great guitar solos here that will test speakers to their limits. The standout tracks are On The Border, Broadway Hotel and Year of the Cat itself for me. A few reviews at the time praised Al’s song writing, and then mocked him for the sound of his ‘esses’, not something that would be acceptable today. Some critics are cruel.

The remaster does full justice to the wonderful title track. The previously unreleased Belsize Blues has a 2020 remix and re-master to finish the main course; though I can see why it did not make the original release.

Next up, over two discs, is the concert; it is okay, not the sharpest recording ever, but given the limitations of the time, it is not bad and worthy as a record of the album tour. I just find it lacks the energy that other recordings of that time have.

The PDF I have of the booklet is great, informative with some fine images of the time. As for the 5.1 recording, I will have to take their word for its excellence. Is it worth the £50 direct from Cherry Red? I think it is. I have enjoyed my revisit to this album, and the remastering makes for an excellent listen.