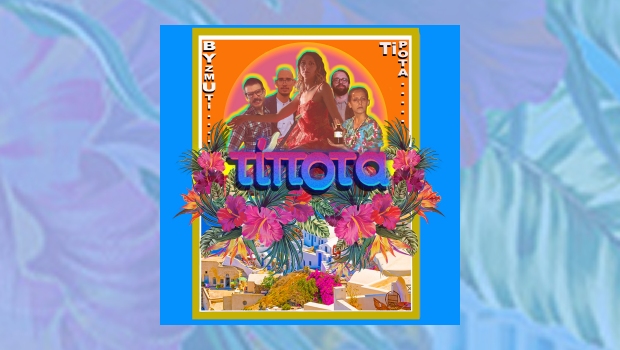 I must begin with an apology to BYZMUTi!

This review is one of a few that I started writing in March 2020 and were somehow lost in time, overtaken by the events of the first quarter of 2020. Although I feel I lack the musical vocabulary to do this album justice, I’ll try and pigeon-hole the music and make useful comparisons with other artists, but this is really a collection of my gut reactions from back when the World was the old “normal” and re-reactions from the current “normal” to this curious music. After some careful consideration, I have decided to start by sticking my own genre label on Τίποτα (Tipota). And that label is Electronica-Avant-Art-Jazz-Garde. That’ll do nicely.

Please imagine, if you will, a sci-fi themed acid trip in a recording studio, where a de-mockneyed Lily Allen is fearlessly making an experimental record with Snarky Puppy. In your completely imaginary drug-addled state, Snarky Allen has managed to hang on to the clinical precision that makes the Fam what it is, and Lily Puppy has added a sprinkle of seemingly nonsensical vocal phrases, painting pictures on your neocortex.

And you’re almost there.

Τίποτα has only four tracks, though they are all quite long, giving the impression that you should consider it a journey in four acts. The band unapologetically launches straight into Zygote Fuzz. There’s no attempt to ease you in, no build-up, no hint of what’s to come. By the time the first track is over you know you can expect some jagged, jazzy, swinging songs with many tempo changes, built in sections. The second track, iGuess, confirms this with a similar feel to the first. It doesn’t let you settle into the groove. Nestled within the tempo changes are occasional rhythms that wouldn’t be out of place if Steve Jansen had performed them on Japan’s Tin Drum.

Clearly you can stick an “i” in front of any word to get instant apple-coolness, but you might also use it to satirise modern gotta-have-style-over-content society. When BYZMUTi invite us to their GMO treehouse, is it a springboard for imaginative contemplation or just a bit pretentious? They see you out with an ambient noodling soundscape which all but segues into the more laid-back opening and softer vocal presentation and instrumental accompaniment of track three, Vacay, before the pace picks up again and it all starts hinting at “bad trip”. But no, you fell for that false sense of insecurity! It all settles into a nice, stable funky swinging groove in the last quarter, though on first listen I found myself wondering whether this would be maintained to the end of the song. It was.

More than halfway into the album and we’ve clearly established that this is not a record built on formulaic pop songs. No verse — chorus — verse — chorus —bridge — chorus — outro for you today! This is a collection of complex, sophisticated, extended musical compositions.

For me, the best track on Τίποτα is its closer. The Space Out goes off on a different tangent. I imagined what would happen if you beamed a small group of traditional jazzers into a sealed room furnished only with a microphone, a collection of modular synthesisers and a multi-track recorder and told them they will only be released if they produce a song. I think they’d spend 5 minutes whipping up a splendid collection of avant garde noises, but after 5 minutes of patching and noodling they’d whip the sounds into a recognisable jazzy shape, with layered vocals that could just be the elusive solution to the problem of bookending their new, somewhat unconventional album.

A journey of four acts? A song of sections? Many tempo changes? What, like a concept album? I can almost feel your ears prick up! No, there isn’t even the tiniest hint of eBow or Mellotron so prog it ain’t. Even better, this feels nothing like a collection of prog tropes and very much like really clever music. If tapping your foot and a good sing-along isn’t your thing but an unconventional mix of sounds from the ’70s and contemporary jazz is, then this will probably knead your pizza dough.