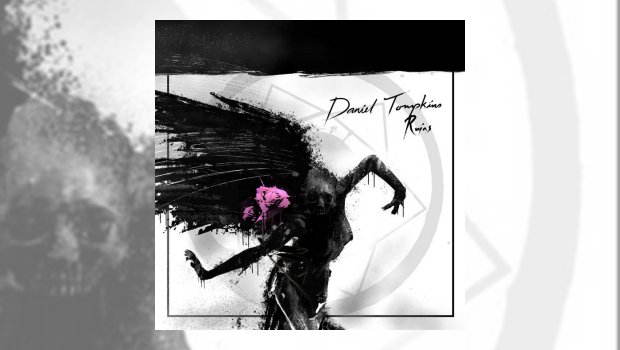 Ruins, the new album from Daniel Tompkins is new, and yet it isn’t – and that is the greatest problem I have with it. Don’t get me wrong, I don’t dislike it, but nor does it set my world on fire, and it just feels kind of, well, I’m not really sure, unnecessary, I guess. I am almost certain I would have liked this more if it had been released before Tompkins debut solo release Castles – but then I also think that if this had been released before Castles, there may have never been a Castles. For Ruins is essentially that album given a rock revamp. And, though I hope I’m wrong, it feels somewhat like it may have been made to placate those Tompkins fans who were expecting something more like this the first time around (Fans are fickle things, and for all those who complimented the album, there were a lot who complained). But, with one exception (and that’s the only track that is new for this release), the Castles versions of the songs are superior to those on Ruins. Obviously this is a completely subjective take, and there will no doubt be many who think otherwise, but I can only tell it as I hear it.

I will admit I was surprised when I first heard Castles – but pleasantly so. Given the variety Tompkins has provided via the various bands he has lent his vocal talents to, no one could really have known what his first solo album might sound like, but I’m willing to bet not too many were expecting the experimental electronic treat we received, nor that of the thirteen tracks, six were remixes, and three of those remixes were of just one song. That the remixes were just as important to the album as the originals was obvious by the fact that the two singles that I’m aware were released from it were two of those remixes. And I guess, in a way, Ruins could be looked upon as a further seven remixes – Daniel Tompkins further down the spiral. But they seem so bland in comparison. It’s Daniel Tompkins sounding as you expect him to sound, and I think what I really like is when he sounds like I was not expecting him to.

What makes Castles so special for me is the minimalism, expansiveness and subtlety. Castles has as rich and colourful a palette as its cover art, and is refreshing in its vulnerability. It is sublime, haunting, abstract and emotive. Each track, the remixes included, are gorgeous slices of progressive pop – and I actually prefer the remixes to the original tracks, where the electronic and trip hop vibes are pushed even further. All that is lost on Ruins. Ruins is, well, just that for me: a reminder that something great was once here. It’s beautiful in itself, but it will never hold the grandeur of what stood before it crumbled into ruins. I feel like it might read that I’m being unduly harsh, and actually this is a solid 7/10 album for me. Or, at least I think it is, if I can push out of my head what preceded it. But that’s the biggest problem I have with Ruins, as the shadows of Castles forever loom large in my mind.

In a way, I’m surprised, as I usually really enjoy when an album gets this sort of treatment. As some may have guessed from my “further down the spiral” comment above, I’m a big fan of the Nine Inch Nails remix albums. Closer Than God is pretty much an hour of the one song in different iterations, but it’s amazing! I like it, and Further Down the Spiral, as much as The Downward Spiral itself. But those albums all took the songs forward and onward to new things. Ruins feels more like it’s looking backwards, or at best, sideways. But I’m aware I’m probably in the minority. Fans of the heavier music of Daniel Tompkins will eat up the more technical and aggressive nature of Ruins. The vocals are harsher, the guitars are heavier (there are some amazing solos). It’s all good. I love TesseracT and Skyharbor. I should love this, and it frustrates me a little that I don’t. But, as I have said, I don’t dislike it. I wouldn’t have bothered attempting a full review for this album, if I didn’t think it were worth the effort.

So let’s try and finish up with what I like about the album. For a start, I love that the songs are not just rocked up versions of those on Castles. Pretty much all that remains the same are the lyrics, and some of the vocal melodies. These are effectively different songs, hence why (I presume) they have been given different names. The songs were re-written with Paul Ortiz (aka Chimp Spanner). Both Castles and Ruins are dark albums, but where Castles was dark inwardly, Ruins is outwardly and overtly dark. Just to ram home the differences, the album ends with a new track, The Gift. It’s my favourite track on the album, and I’m not quite sure if it’s just because I have no previous version to compare it with, or if it genuinely is that much more impressive and enjoyable. Regardless, it’s a great way to end the album. I’m just not sure how often I’ll listen to it. For sure, I’ll pull it out every now and then, but Castles will still be my go-to.