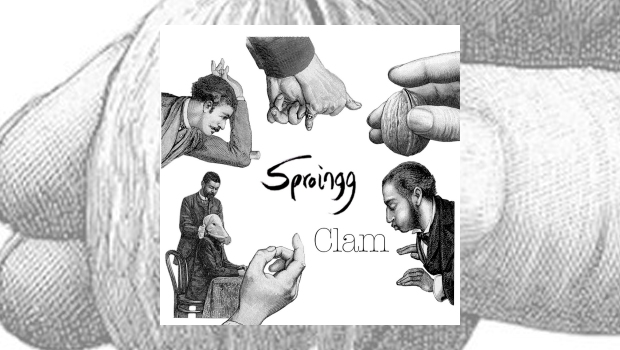 The anticipation of listening to a new album is a bit like the anticipation of making love to a new partner. Remember that? No. Of course you don’t. I know our demographic, I’m part of it (wink)! Imagine, if you will, an imaginary scenario. Cast your mind back and engage your imagination to imagine the scene:

A log fire burns in the hearth in a candle-lit room. A nervous individual sits nervously, awaiting their (hopefully-soon-to-be) lover. The casserole is in the oven, the wine is spiked… I mean breathing. The scene is set. Suddenly: doubt; time is pressing, and something is missing! A metaphorical light bulb explodes above head-height and a non-existent glass shrapnel epiphany showers down:

“Music! That will set the mood!”
Clam by Sproingg starts on the stereogram.
“Oh crap, not that one!” and a frantic search for That’s What I call Romantic Love Songs #69 begins on Spotify.

But was this the right decision? In our search for tingles, vibes, tightness, sexiness, the inevitable comparison with what has come before and a bit of fun, could this actually be the perfect album for wooing? Let’s see how it stacks up!

Tingles
I put the album on and waited for some special tingles.
I’m not sure, but it feels as if Sproingg are playing live as an ensemble in the studio without a click track, using simple, traditional gainy rock tones to achieve their jagged, raw instrumental, slightly mental music, an impression cemented in my brain by the seemingly improvised opening track, Stuffer Gapes and Drapes His Cape On A Vaping Ape (Including Destiny’s Abortion). It feels as if the title of the song was improvised as well. Edgy. Live sounding music is quite tingly!

Vibes (Music is ALL about that!)
Although it sounds as if there are guitar overdubs I’ll bet that this is the melody side of the Stick playing against the guitar, and I’d go one step further and suggest that they could sound exactly like this live – unless there are bits where there is violin and Stick at the same time. So not exactly. But close. Stick. I really like Stick.
You can almost feel the strings vibrating over the pickups on the violin, Stick and guitars, sometimes backed off enough to hear that bass tone in all its Sticky glory, droning away quite splendidly.

Tightness
When hitting the snare, tuned as tight as… er… a drum, with a stick – instead of brushes. It is a driving drum. I could just pick out that ping, so much more prevalent on their earlier eponymous release, that reminds me of Bruford.

Sexiness
Sproingg can build subtle, sexy, pedal-driven soundscapes, most likely Johannes and his Stick and violins (it’s a Stickist thing). Track 2, the aptly named (Impure Thoughts) Pure Cushion, starts in this way, drums and guitar building rhythmically upon this foundation of padded bass groove into an ever more frantic guitar solo, ending abruptly after an impressive seven-minutes-and-fifty-one-seconds, leaving us with a gentle, sonic wind-down after which I really needed a cigarette.

Comparing to things you have loved in the past
I hate to do this; as a reviewer it feels like such a cop-out, it IS a copout – but as a frame of reference, and perhaps inevitably, I am forced to draw comparisons. I therefore have to say it reminded me of the Wetton era King Crimson, despite later incarnations of Crimson having Tony Levin in the Bass/Stick corner. The loose, vaguely psychotic, paradoxically structured and chaotic feel echoes what I sense of KC when they had Jamie Muir on percussion. This is no bad thing, in my book, as both periods of KC are the ones I am drawn to, especially Larks Tongues, Red and Discipline. But familiar though it might feel, influenced though they might be, I think the music stands out as uniquely Sproingg. A bit of fun.

This album is a lot of fun and it was achieved without Zappa-esque pseudo-comic lyrics, but you have to go with it. Shut your eyes and actually try and imagine those clinically depressed, middle-aged suburbanites, one hand stopping the pram containing a restless child from rolling away, having reluctantly succumbed to a street survey, too polite to walk away, being asked to choose between Jizzo™ cream cheese and a mortally wounded clam. I find that particular image a whole lotta fun.

So, did our romantic individual get it wrong? Yes. Someone who hears Clam and finds themselves receptive to a bit of luuurve is probably the potentially perfect significant other.


“Be one of the first on your street, in your prison block or padded cell to own Clam!”!

I couldn’t have put it better myself.