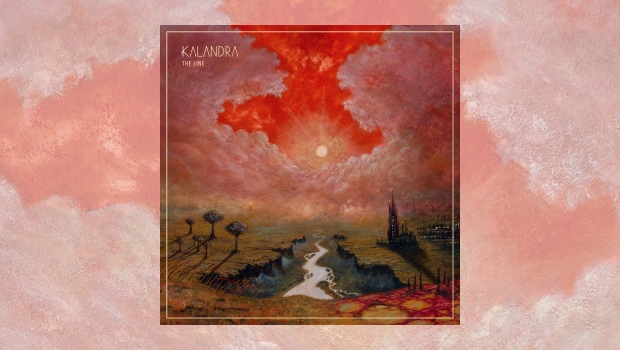 I’m well aware that the appropriateness of genre labels can be quite subjective, and yet I have to wonder just what is played on Norwegian radio for Kalandra to be “pop sensations”, even when the adjective “alternative” is sometimes added to that statement. Now I’m not averse to pop by any means (and in fact like a lot of pop), but I still can’t reconcile that description to Kalandra based on The Line, their debut album. The closest I can come is if I make some comparisons of the vocals of Katrine Stenbekk to, for example, Kate Bush or Sinead O’Conner (neither of whom she actually sounds at all like, but at times she shares some of their mannerisms and quirks). And it is appropriate, I think, to start by mentioning Katrine, as her vocals float over and above everything else, high in the mix – powerful, evocative and emotive.

As if to leave us in no doubt of the importance of Katrine’s vocals, the opening number, Borders, is largely held together by just her voice. It’s an absolutely breathtaking and beautiful beginning, which sounds more like Nordic folk than any kind of pop. Given that Kalandra have memorably already covered Wardruna’s Helvegen, this will not be a surprise to those who have already been following the band, and impatiently awaiting this album. This is easily one of the highlights of the album, and definitely one of my favourite songs from The Line. From this first track, it’s abundantly clear that this album is not in any way going to be a disappointment.

The next track, The Waiting Game, will not be a surprise either, as it is one of three singles released ahead of the album. This is possibly as close to a radio pop song that you will find here, and it’s low-key and understated. It’s pop in slow motion, which appropriately enough is the title of the following song. Slow Motion is a slow-building, minimalist, ambient and atmospheric delight, over which Katrine provides sparse vocals, and sweet vocalisations, before a chorus crashes in sooner than expected. I love the dynamics of this piece, both musically and vocally it manages to convey gentleness and fragility, with considerable power and force.

Kalandra seem to describe themselves as a trio, but fourth member Oskar Rydh, on drums, definitely makes his presence known on Naive. Despite its unassuming beginning, this is one of the album’s rockiest moments, though, funnily enough, not one of the heaviest. The climax of Naive is one of the most rewarding on the album too. It’s a surprising burst of energy in an album that had largely thus far been more about atmosphere than rocking out. Its placement is perfect, giving the following Virkelighetens Etterklang so much more impact. This was the album’s lead single, sung in the band’s native tongue. It was impressive then, but is so much more so here. It’s amazing how much difference it can make to a song, to hear it in context of an album, rather than standalone.

It may just be me, but Scandinavian languages always sound somewhat mystical and magical, and augment the atmosphere of any slow-paced song they’re sung over. This was certainly the case with Virkelighetens Etterklang, but based upon Ensom, the same holds true for more upbeat tunes, as this song evokes the same sense of wonder and awe. As the track progresses, a battle almost seems to ensue between Katrine’s vocals and the music. The playing is powerful and almost pummelling. Brave New World comes as quite a relief, though of course it’s a false sense of security (the song being based upon the famous Aldous Huxley novel). This song was also released as a single ahead of the album, and it’s easy to hear why.

On The Run is one of my favourite songs in the set, a simple but rousing – and rocking – number, and it appealed to me immediately, reminding me a little of Smashing Pumpkins. It’s actually not the first time on the album that I’ve been reminded of that band, but it’s the most obvious – with some of those delicious guitar slashes. Just as with the other similar number, Naive, its placement is perfect, giving greater impact to the quieter number that follows – in this case, Wonderland, which is suitably wondrous. With You is gentler still: simple, subtle and pretty.

The album closes as impressively and dramatically as it opens. It Gets Easier has a post rock vibe in the way it builds, and it becomes the inverse of Borders, as the first number where Katrine’s vocals are in danger of being drowned out by the crescendoing instrumental wall of noise. As we began the music with only voice, we end with only music. Two diametrically opposed numbers which provide perfect aural bookends, beautiful in every way.

This is a quite remarkable debut album, and despite there being a lot of variation in sound and mood, it is surprisingly cohesive. Some of the tracks are ethereally light, while others have such weight that they are heavy enough to call metal. The whole is impressive, leaving me in no doubt that Kalandra is a band to follow with great interest.