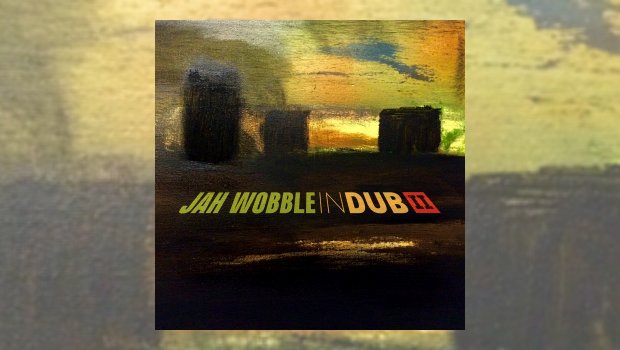 In my fried cranium, Jah Wobble will forever be the guy in the Oxfam suit, sat on a bar stool and grinning malevolently into the Top of The Pops camera through a smile distorted by two blacked-out teeth, pumping out the insistent bass line that made his band’s unlikely hit single Death Disco, some 40 years ago. John Lydon’s post punk trailblazers Public Image Ltd stirring up the ether with his song about his mother withering away under the evil spell of cancer was a truly surreal and unsettling experience, and something a mainstream music programme has never come close to since.

John Wardle, AKA Jah Wobble, was the rocksteady fulcrum of PiL’s then fearsome and wilful triangle, and he has maintained that unerring eye for the subsonic off-beat ever since, in a career that has seen him release dozens of albums in one guise or another over the years. His love of dub reggae was never far from the surface, and on this new career-spanning compilation album it is given free reign. Joining Wobble on this second instalment of his trip through his dub archives, and four years since the first tranche, is his band Invaders of The Heart, and a whole host of other guests, as diverse as Ernest Ranglin and Jaki Liebezeit. Together they produce a steamy trip through various cultural jungles, urban and otherwise, always anchored by Wobble’s mesmeric lower frequencies. Our South London Renaissance Man also painted the impressionistic cover picture, which conveys the slightly altered states of the music on this long trip very well indeed.

South London Dub Symphony, probably deliberately, sounds like it’s out of phase. Play this loud enough on headphones and it feels like your brains are being sucked out of your ears. This tune is based around recordings made during a journey on the top deck along the whole route of the 176 London bus. Wobble likes to make notes and recordings on his long perambulations by foot, bus, or train around the capital, and you can feel an earthy spirit throughout the album. At the same time, this collection floats effortlessly somewhere between Earth and space, as it walks nonchalantly along, hands thrust deep in pockets, with its feet never quite touching the ground. In his comprehensive liner notes, Wobble makes references to the bleakness and otherworldliness of airports and their surroundings as good places to write, and this disconnected air is something I have often felt myself when travelling, so I know where he’s coming from.

Back to the music! Mu reprises and twists a theme from the rolling bass line in Poptones, but there are no Japanese cars on this one. Taiko is percussion led, and features the Nippon Dub Ensemble, and a bass line sooo looow down in the frequencies, you can be proud of your speakers if they don’t rattle. Marvellous! Following that is Saturn, which features Jaki Liebezeit, and Harry Beckett stealing the show on trumpet, both sadly no longer with us.

Among many other highlights are the tracks featuring Uzbekistani singer and actress Yulduz Usmanova. Ketmagyl (Don’t Go Away) is a delightful dreamy thing, with Wobble’s bass line being subtle and restrained, showing his natural instinct for going with the flow.

That was all on CD 1. CD 2 is no slouch either, as you would expect from a man with such voluminous back pages from which to draw. Wobble’s other inspiration is the music of other cultures (I cannae abide that term “world music”. Isn’t it all “world music”?) and a track like Lam Tang Way Dub is as fine an example of that influence as any. More of Wobble’s trusty subsonics reverberate through To Heathrow Cargo, A Parcel, but don’t think this album is one-dimensional, oh no, for it is a very varied musical landscape we traverse in our multi-coloured balloon, oh yes! This is evident on the very next offering, Umbra Sumus (Part II), which is underpinned by a mournful cello and some reflective keyboard electronica, all quite spooky.

CD 2 kicks off with the all too brief Dust Bowl Dub, with a snare drum on the offbeat, Wobble’s pulsing bass, and a slide guitar. Americana Dub is a thing! Yulduz Usmanova’s alluring pipes return on the gorgeously slinky Bilmadin (I Don’t Know), and the following Bilmadin Dub rocks the house.

The album ends with two exercises in spacious tunes, highlighting that the spaces in between the notes are as important as the notes themselves. Yangqin Dub is one of two tracks on the album, the other being Silk Road Dub, to feature Wobble’s wife Zi-Lan on Chinese harp. The instrument lends the tune a mysterious quality, and underlines its meditative qualities. Wobble does not make an appearance until three minutes in, and even beyond that point he drops in and out of the mix, leaving it to the ethnic instrumentation to establish the Zen-like calm. Album closer As Night Falls (Part 3) sees Wobble in collaboration with Deep Space, creating a more grounded and urban soundstage, percussion and flute to the fore. The overall feel is somehow palpably seedy, some sleazy and grimy guitar near the end suitably thickening the atmosphere. Nice!

In Dub II can be enjoyed both as a deep (sub-bass deep) listen, and as sublime background, and a better way of whiling away over two and a half hours in these strange unsettling times will be hard to come by. It is also a perfect place to start for the Jah Wobble dub newbie. Along with the first collection, of course!