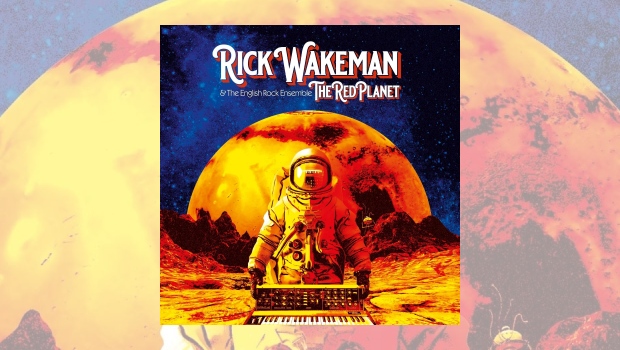 The Red Planet is Rick Wakeman’s first proper instrumental prog offering of completely original material for quite a number of years. Consciously a return to the styles of his Seventies heyday, the album is also the first collaboration with the current version of The English Rock Ensemble since 2003’s Out There. An avid Wakeman fan in the late Eighties and early Nineties, I must confess to having lost sight of his solo work (with the exception of the highly publicised Return to the Centre of the Earth in 1999) up until the 2012 re-recording of Journey to the Centre of the Earth. A saturation of releases across the Nineties, and forays into wide-ranging styles, put me off somewhat.

The re-recordings (with additional material) of both Journey… and The Myths and Legends of King Arthur in recent years piqued my interest once more in Wakeman’s solo work. If you haven’t yet heard them, I urge you to do so. They improve significantly on the originals and I would regard them as essential additions to a collection; the production is exquisite, and the additional material is amongst Wakeman’s finest works.

So on to The Red Planet. Wakeman’s fascination with space can readily be found in his back catalogue. No Earthly Connection, the impressive 2000AD: Into the Future and the aforementioned Out There. He recently commented that he has a keen interest in our nearest neighbour in the solar system, and let’s not forget his celebrated sojourn to the sun’s fourth rock on David Bowie’s Hunky Dory.

This latest recording is a feast for prog lovers, especially those who long to hear the pianos, Moogs and synths of the classic Seventies era. The canvas is awash with Fragile-era Yes, and there are broad brush strokes from the various styles which graced Wakeman’s earliest solo albums. The work features other details too, from Bardens-era Camel, through Keith Emerson bombast, to the gentler moments which graced Wakeman’s later Airs trilogy.

All eight of the album’s pieces refer to aspects of the geography of Mars, and we kick off with Ascraeus Mons. Bold church organ chords instantly create a sense of drama as they march along to the standard time beat. Soon drummer Ash Soan joins in and choral voices follow. There’s a delightful medievalism to this, which calls to mind …King Arthur….


Tharsis Tholus opens with a mellow early Camel vibe that could easily have graced The Snow Goose, juxtaposed with a rhythmic breakdown that receives the full weight of the English Rock Ensemble and builds into the first of many classic Wakeman solos. This is then followed – with another Wakeman solo, this time with a Journey… feel to it. Lee Pomeroy’s bass complements the proceedings perfectly and rounds out what, I think, is one of the finest pieces Wakeman has ever recorded.

Arsia Mons, is a track of real contrasts. The crunchy, spiky synth builds into a frenetic crescendo in the drums before plateauing into a softer acoustic guitar part which is backed with Moog washes. After the return of the frantic synth, Dave Colquhoun gets to delight the listener with a Spanish-style acoustic guitar solo and more of those washes. It’s a haunting conclusion and one that certainly feels other-worldly. Olympus Mons relies on a repeated figure through much of its duration and would certainly not have been out of place on one of the Seventies Yes albums, Wakeman sparring with Pomeroy in much the same way he did with Chris Squire. There are lots of flourishes and changes across this piece, but it really lights up with Wakeman’s solo in the track’s second half. This one is likely to be the one which pleases fans most of all, with Wakeman’s workout testing the impressive support provided by the Ensemble.

The North Plain opens like the soundtrack to an eerie sci-fi horror before the really grungy main theme is set out. Again, this is classic Yes fare served up with Wakeman’s soloing over Pomeroy’s basslines. Colquhoun closes this one out on electric guitar. The last of the Martian mountains to be honoured is Pavonis Mons and happens to be the album’s finest track. There is a repeated theme backed by a marching standard time beat which I simply can’t get out of my head. There are so many variations to the main theme across the seven minutes duration here, with that steady rhythm section in the background, that this is a Wakeman tour de force that quite leaves one breathless by the end. Classic Wakeman from start to finish.

South Pole contrasts brass and flute voicings for its opening couple of minutes. The flute takes over for another haunting passage which segues into a piano passage very similar to the piece from Country Airs which Wakeman revisited on ABWH’s The Meeting. It serves this track very well and leads us back to a repetition of the album’s first and second themes. The album’s only slightly weak moment is the overly long Valles Marineris, a bolero-like outing originally intended for the ARW recording which never happened. Though certainly not inferior to the album’s other efforts, it never really seems to know where it’s going. Pomeroy’s bass playing in the introduction is mesmerising, though, and warrants a mention.

All in all, this is a superb solo effort from Wakeman and deserves its place alongside the best of his works. For those of us disappointed that Yes finds itself so divided in its closing years, what a delight to have Rick Wakeman release this fine effort which casts a fond eye upon the celebrated albums of his early career whilst serving up engaging scores which entice the listener to repeated plays.