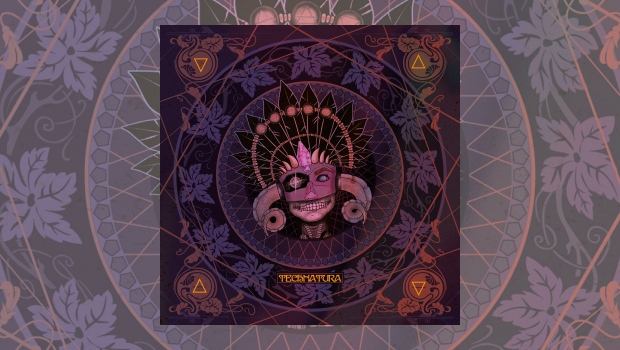 I don’t know if it’s something they add to the water supply in Sweden, but it has been a hotbed of great new progressive music for years now, with a seemingly endless list of new bands emerging each year to delight music fans the world over. Well, here’s another band to add to the list, Vulkan, who hail from Karlstad.

Technatura is the band’s third album, and right from opener This Visual Hex it is clear that we have a band who occupy the heavier end of the prog spectrum. Whilst undeniably there is a good bludgeon quota, it is balanced with melody and interesting embellishments. We find sounds flitting in and out of the arrangements which could be violin, flute, trumpet even, but are probably keyboard-generated. However they are made, they provide textural and melodic interest which elevates the overall sound above the standard ‘heavy prog’ we often hear. The atmosphere is slightly eerie and dark, with intriguing percussive effects, but the overall musical sweep of the verses is quite uplifting, evocative of early Haken perhaps. The vocals of Jimmy Lindblad are a highlight, providing the melody behind which the band drive forcefully on. Drummer Johan Norbäck provides a very solid lively beat alongside Oscar Pettersson (no, not the legendary jazz pianist – no jazz here!) on bass, and together they propel the band energetically along.

Several of the tracks on the album are sung in their native Swedish, which I find works very well, just as Opeth’s last album sounded somehow ‘right’ in the native language version. One of these is Marans Ritt, which is the first single from the album. It is a delightfully light, largely acoustic song, but slightly mystifying as a choice of single in that it is not at all representative of their normal dominant style. Whatever, it is a beautiful interlude. Elsewhere, there are moments of calm ambience interspersed between the longer heavier workouts. It makes for a well-paced and sequenced listening experience.

There are many stand-out tracks, so I’ll just mention a couple: Klagans Snara with its throat singing and keyboard textures segues beautifully into Rekviem, which starts as a pastoral lush ballad, but gradually builds in intensity to a superb full-on climax. It’s a stunning piece of controlled power and restraint. Christian Fredriksson excels on guitar on this piece. Although he can riff along with the best of them, his solos are relatively few, and played with restraint, preferring to provide colour and texture for the most part. In fact, despite all band members clearly being excellent musicians, they play throughout as a band, with NO showboating!

The last two songs combine to provide a suitably epic conclusion. The Royal Fallacy is the longest track at ten minutes, but is worth that time as it builds in layers, winding the tension up all the time. There is a suspicion of some ‘harsh’ vocals for a few moments as the intensity increases, but I hesitate to mention it as it in no way dominates, and I know how some baulk at the very idea. Forget I said anything! We segue into The Madness Sees No End with its stark simple drum beat intro, but which soon gives way to a semi-chugging riff. It is a sort of off-kilter processional march with keyboard ‘trumpets’ emphasising this feel. It makes for a superb ending, completely unexpected and yet makes total sense.

So there we have it, another band well worth investigating, whom I earnestly hope can make some headway with this excellent release. I know there are so many bands out there who are similarly worthy of attention, but I heartily recommend Vulkan if you appreciate the heavier end of the genre.