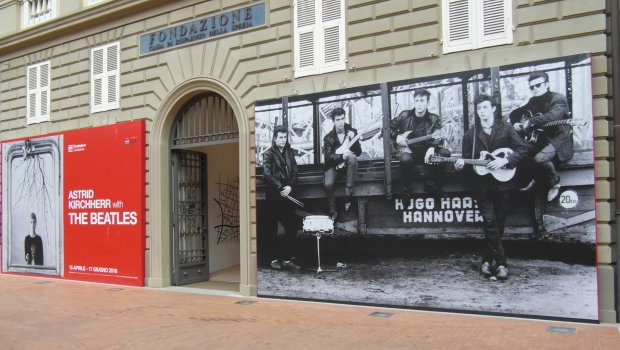 A few years ago I was on holiday in Italy with my girlfriend, our base was the old port of Genoa on the Mediterranean Sea. On one of our trips we found ourselves in the provincial town of La Spezia, known as a harbour from which daily boat trips to the UNESCO World Heritage site Cinque Terre depart. It must have been around seven in the evening, we were preparing to return to our apartment and wandered a bit through the largely deserted town, trying to find our way towards the place where we left our car. Suddenly I spot a life-size poster of my favourite band of all time across the street: The Beatles. The iconic black and white photo of the (then) five on the trailer of an old truck in the port of Hamburg covered almost the entire wall. What was going on here?

It soon became apparent: it was a retrospective exhibition of Astrid Kirchherr, the photographer and close friend of the Liverpool rockers from their early days. I must confess my heart skipped a beat: would the exhibition space still be open at this late hour? This turned out to be the case and on top of that, admission was free – almost unbelievable. When I entered I was even more surprised: I saw pictures that I had never seen before in my life, which is actually quite rare, I count myself among the biggest Beatles fans, the number of books, magazines, scrapbooks, videos, DVDs and – last but not least – records (including original Parlophone singles) are countless.

Still, I was surprised and even touched by what I saw hanging on the walls here, in a most imaginative and respectful way. I walked around quietly for an hour, as if I were visiting a church; it was an almost religious experience. My girlfriend also quite liked it, although she did not know much about the special role that the German photographer had played in the life of the early Beatles. I think the story is pretty well known: the guys’ first overseas trip to Hamburg in 1960, featuring alongside Lennon and McCartney the still underage George Harrison, original drummer Pete Best and John’s best friend from art school, Stuart ‘Stu’ Sutcliffe. The latter, in particular, would play a crucial role in this extremely important period for the group. To cut a long (and well-known) story short: Stu, actually not a musician at all but a very talented visual artist, would fall in love with the worldly Astrid. To finally decide to leave the group and settle as a painter in the northern German port with his lover. Meanwhile, the remaining musicians refined their skills in difficult circumstances, only to return to their beloved Liverpool as purified and seasoned musicians and start their conquest of the world from there. There is a great movie about this specific era, Backbeat, an absolute must for fans of the Fab Four.

Astrid was key in the appearance and image of the band. Not only because of her iconic photos, but also because of her advice on clothing and hairstyle; the legendary Beatle-look was largely her doing. She was happy with Stu until his tragic death from a cerebral haemorrhage in 1962. When the Beatles, already a successful act, returned to Hamburg for the second time, in April 1962, John’s old friend had just died. Astrid would never be the same again. She remained friends with the remaining band members, especially with George, with whom she would continue to have a warm relationship until his death in 2001. Beautiful colour photos from the period 1961-1963 are living proof. After that it became quiet around Fraülein Kirchherr. She retired, having stopped taking photographs in 1967, and remained out of the spotlight for most of her life. Astrid Kirchherr died on 12th May 2020 after a short illness. She was 81 years old.