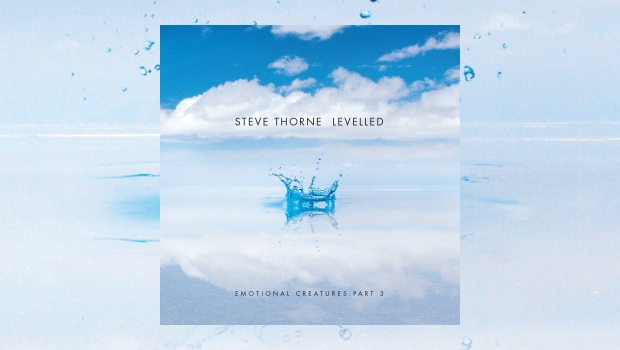 Levelled: Emotional Creatures, Part 3 is the sixth album by Englishman Steve Thorne, the successor to Island of the Imbeciles (2016) and the third part of his trilogy Emotional Creatures. With some imagination you could call Thorne a (prog) singer/songwriter. The album was mixed by the prog-acclaimed Rob Aubrey (IQ, Pendragon, Spock`s Beard, Big Big Train), Thorne sat next to Aubrey at the controls and is also responsible for production.

In the past, Steve Thorne has made extensive use of a variety of respected prog musicians from the UK, on this album he is breaking this trend. The drums are played by Kyle Fenton (Cosmograf) while the electric lead guitar is in the hands of completely unknown local artist Geoff Lea. Both Fenton and Lea deliver mature and solid performances and support their employer optimally, especially listen to the latter’s phenomenal guitar parts. As usual, Steve Thorne plays all other instruments himself.

I don’t know what it is with Thorne, but every time I hear his music it puts a smile on my face. The recognisability factor is enormous and his melodies are always written in capitals. Moreover, the man’s vocal qualities are of a more than decent level and he always knows how to keep the instrumentation exciting. Then, if you are also capable of supplying each song with a great tune and a catchy chorus then you are in the right place. And then there’s the lyrics.

“The album is sure to challenge pretty much everybody lyrically with its controversial subject matter!” Steve states. He comes up with some strong comments in which he explains the central idea behind the album. This explanation is full of conspiracy theories, especially the Moon landing in 1969 which is something that fills him with horror and distrust; according to Thorne this event never took place, and we respond to this with denial, ignorance and disinterest. Moreover, he doubts whether the Earth revolves around the Sun. Well, what can I say to that? Fortunately, the dreariness is restricted to the lyrics, the music is far from it and often sounds deceptively positive and up-lifting. If, for instance, IQ would tackle these topics, you could safely say that the music involved would more likely be doom and gloom as well, but not with Thorne. He knows how to wrap these dark lyrics in an attractive kind of (prog) rock music that gets you enthralled almost instantaneously. A kind of Trojan Horse, as it were, probably putting the message across in an even better way. Smart thinking.

Little Boat (Part 1) opens the album, a short acoustic intro in the best busker tradition with brass band and all. It sounds a bit like Pink Floyd’s Outside the Wall, further enhanced by snippets, sound collages and voices, true to the famous icons’ example. The song spills over into He Who Pays the Piper, an excellent song, arguably the best on the album. Ominous atmosphere, musically leaning a bit towards Alan Parsons Project, the odd twelve-string guitar (Thorne himself), almost ten minutes of that typical Thorne signature. “So NASA lied about the man upon the Moon”, is the frequently recurring lyric, further exploring the conspiracy theory. Brilliant guitar contribution from Geoff Lea, and I’m all ears now. Rainy Day in New York also has that recognisable sound that only Thorne can create, again with wandering electric guitar from Lea, less prog, more like AOR, but of high quality.

The pace slows down, Waking Up is a beautiful ballad with excellent fretless bass playing by Thorne, please check it out. The melody lingers for a long time, the harmony vocals are strong as always. A lyrical attempt at positivism, “embrace the good, good people”, can’t hurt. During World Salad Surgery there’s strong reminiscence of Fish’s early solo work, especially Vigil in the Wilderness of Mirrors coming to mind. A kind of spoken, staccato lyric, often of a pedantic nature, with restrained anger. The music is rock solid and once again has a strong proggy tone. Just listen to the middle section, the duel between guitar and keys – hats off.

Snippets and other audio fragments connect all tracks, for Psalm 2.0 even bleating sheep appear, just like Pink Floyd’s renowned Sheep. Lyrically it’s in line with his ideas about denial, ignorance and disinterest, again the razor-sharp guitar from Lea comes at exactly the right time – the boy is on fire. Well, at last the frightened, ignorant sheep return to their pen. For The Fourth Wall, the tempo goes up a nudge in this rocky song about the imaginary wall between the audience and the performing artist on stage. Intriguing, both lyrically and musically. Monkey Business reminds me a bit of recent solo work by Neal Morse (Life and Times), an unpretentious, funny little tune with Beatles/Beach Boys-like harmony vocals. Waves is another characteristic Thorne song with beautiful instrumentation and vocals, the same goes for I Won’t Forsake Truth, perhaps a tad too poppy due to the (electronic) violins. Fortunately, we have Lea’s Jeff Beck-esque guitar at the end. The closing Little Boat (Part 2) picks up where opener Little Boat (Part 1) left off. A subdued ending, Thorne all by himself with a little help from flautist Gina Briant and the local brass band: we’ve come full circle, sheep bleating and it has started to rain. Again.

Eleven songs with a total playing time of 54 minutes, the average song lasts about five minutes, apart from opener/closer Little Boat 1 & 2 and the longest song, He Who Pays the Piper. Consistent quality without one particular weak spot (well, almost). I’ve made quite a few references, I do realise that, but please forget about them as soon as possible: there’s certainly no copy-cat at work here, Thorne has his own, very recognisable style of making music. And whether or not you endorse his theories, they are definitely intriguing. He has somehow managed, for me, to delve into matters like cognitive dissonance, the fourth wall and heliocentricism, well done Steve. But what I will always endorse, no matter what, is this man’s music. Not always prog (Rainy Day in New York, Monkey Business), certainly not, but very well crafted and knows how to fascinate and captivate until the very end. How often does that occur? Highly recommended and definitely a candidate for the obligatory year-end 2020 charts.