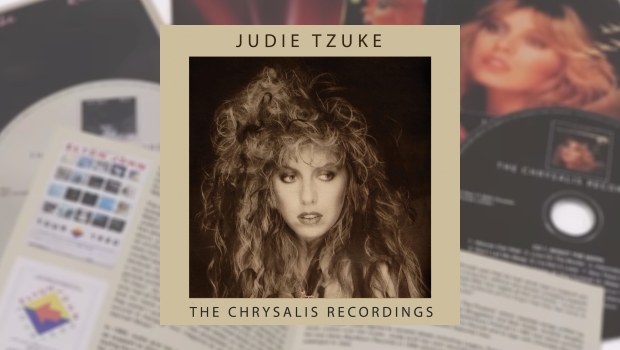 As its name suggests, these albums are the combined output from Tzuke’s time with Chrysalis, and are made up of two from the studio, Shoot the Moon and Ritmo, and a third a live album composite of concerts at Hammersmith and Glastonbury. As a long time fan of Judie’s music (late ’70s onward) I was eagerly looking forward to reviewing these albums, so let’s get straight into it, beginning with Shoot the Moon.

Okay, stats first: there are eleven original tracks with three bonus tracks. There is a heavy reliance on the very ’80s drums and keys that also feature across a very broad swathe of pop and AOR from that era. In many respects, this somewhat overshadows the meanings of the songs, with Heaven Can Wait, Information, Beacon Hill and Don’t Let Me Sleep all being dominated by this soundscape. The redeeming tracks for this reviewer are Love on the Border, I’m Not A Loser, Now There Is No Love At All (one I don’t recall from earlier), Late Again, Liggers at Your Funeral, Water in Motion and the extremely short title track Shoot the Moon.

These are a good balance of Judie’s great ballad voice, and the more band driven ‘stompers’. Some influences come across in these tracks: Dean Friedman in Water in Motion and Elton John on one of the bonus tracks Run on Luck, unsurprising given that she started out with Rocket Records just a few years previously.

The background for the recordings is discussed in the set’s notes: “Shoot the Moon was recorded mainly at Rockfield Studios in Wales and was released in 1982. During the spring tour two sell-out shows at the Hammersmith Odeon (now The Carling Apollo) were recorded and later that year the acclaimed live album Roadnoise was released. Judie, Mike [Paxman] and Paul [Muggleton] wrote new songs and went to Mayfair Studios in London to record her fifth album, augmenting her stage band with a number of other musicians. The following year saw the release of the Ritmo album. Again she toured extensively but realising that she was not a priority act for Chrysalis and that they were not going to release the album in the States, she left Chrysalis for pastures new.”

Moving on to Ritmo, the next album from the studio. Good solid start with Jeannie No, where this time there is great clarity on the vocals, the ’80s staccato beat ticking along nicely with some nice keys and laid back bass, followed by She Don’t Live Here Any More, vocals once more to the fore, a pleasant guitar break interspersed with the ubiquitous drumbeat, and a few melodic percussive moments thrown in.

From here on in, the next four tracks are all a bit predictable, ‘shouty and stompy’ my notes reveal, with the drums getting in the way (for me anyway). Walk Don’t Walk then brings back some light and shade with Judie’s falsetto dominating, accompanied by flute, and a nod to Japan’s Tin Drum with some ethereal moments weaved in and around the bass and keyboards. Skipping quickly over Push Push, Pull Pull, another weak song dominated by a throwaway chorus, we reach the last of the original tracks, How Do I Feel?, which has a superb build from a quiet intro, the lyrics are repeated over and over, but this works well, one of the highlights of an average album.

Finally, Road Noise (The Official Bootleg) was set to play, and I sat back, looking forward to this live recording. From the off I was singularly disappointed with the overall sound; yes it was a ‘live bootleg’, yes it was 1982, yes the crowd were enjoying it, so perhaps the experience at the time was far stronger than the 38 year ‘lag’ suggests. For me there were very few highlight moments to pick out, probably I’m Not A Loser, and For You passing muster, as for the rest, it was a struggle to listen through some of the songs, and I would see this album being for completists only.

I feel guilty in putting this down in writing, but I feel that this release is not truly reflective of Judie Tzuke, the singer and artist who I have admired, seen several times and met over the last forty-plus years. There are many other albums that capture this magnificent talent, vocal range and purity far better, but hey, it’s all about ‘The choices you made’, and at £17.99 for a triple album set, it’s not going to make too much of a dent in the ‘home entertainment’ budget for most.

Finally, for those out there who only really know Stay With Me Till Dawn, in the same way that many folk see Kayleigh as Marillion’s finest hour, please, please take a listen to this superb lady and make your own judgement, the more you dig, the more gems you will unearth.