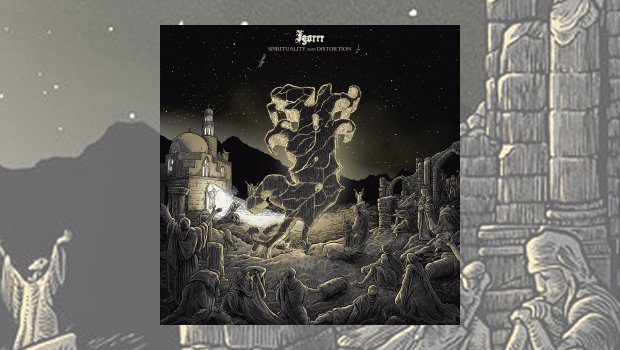 Incongruous, innovative, insane. Three words that sum up French experimental/avant-garde metal act Igorrr to a tee, and their latest release, Spirituality and Distortion, sits comfortably within that description too.

This is my first album review for TPA, but that aside, it is a little difficult to review this album as it is not easy listening. By definition, nothing Igorrr do ever is, even their lyrics are penned in a constructed language called ‘Öxxö Xööx’ (Öxxö Xööx being a musical project that Igorrr’s composer Gautier Serre has also been involved in – you can find a glossary and dictionary of the language here).

So, let’s start at who Spirituality and Distortion is aimed at, and then assess whether the music within achieves its aims.

An audience already familiar with Igorrr will no doubt have a music collection that includes Mr. Bungle, Frank Zappa – even Primus – as well as the heaviest elements of the metal world. Serre identifies his musical influences as diverse; Cannibal Corpse and Meshuggah, JS Bach and Chopin, as well as Aphex Twin, among others. Something for everyone you might say.

Something for everyone, if your method of song composition includes taking multiple genres and mixing them in a blender. Does a sirloin steak, banana and kiwi smoothie sound appetising?

If you read my recent concert review of Thank You Scientist, you’ll know that progressive metal acts like Between The Buried And Me are my musical sweet spot – and Igorrr lands well within my own biased taste of mashing music styles together.

On a personal level, I love Distortion and Spirituality. I love it enough to have featured the band on my own website. The album showcases what’s great about the Igorrr formula: taking genres from the furthest parts of the music spectrum and juxtapose them.

Take, for instance, the rage-filled screams of George ‘Corpsegrinder’ Fisher (of Cannibal Corpse) and layer it on top of an 8-bit sound, as in Parpaing, and you’ll have a clear idea of what Igorrr intends. The incongruity is delightful – if your senses can handle saturated music like that.

Written and produced by multi-instrumentalist Gautier Serre with assistance of a small orchestra of musicians, the Igorrr formula hasn’t changed since 2017’s Savage Sinusoid (their debut with Metal Blade, but the project’s fourth LP overall), but it’s clear the composition has evolved – for the better, in my opinion.

Production-wise, there’s lots to appreciate – full, meaty guitar tones; powerful drums that stand out in the mix, and the snares have attitude to spare (though they sound a little bit too compressed). Even the often-forgotten bass has plenty of moments to showcase itself and steal the show.

Serre’s experience in electronic music also shines through, with the electronic elements adding pace and excitement to the classical, folk and metal segments.

It seems that for this outing, Serre leans more on the Le Prunenec’s powerful soprano, whereas Savage Sinusoid was more reliant on Lunoir’s almost paranoid screams that provide dramatic effect rather than invoke a story or a palette of emotions.

The major improvement that S & D has is that, compared to it’s predecessor, Igorrr have opted for a more focused approach to the album. Though it was an exhilarating listen, Savage Sinusoid lacked cohesion, going for a balls-to-the-wall approach.

In Spirituality and Distortion, there is an overriding thematic approach that allows the tracks to work together.

Serre says of his album that it is “the soundtrack of the apocalypse. Please listen to the whole album”, he asks, “it was built to be listened this way.”

So, not a concept album, but conceptual.

We see this in the album art: a Middle Eastern setting reminiscent of the birth of Christ in which Igorrr arrives like the Archangel Gabriel to worshipping mortals. The apparent lack of humility showcases the sense of humour that Serre approaches his music with.

And yet, the album is written with the apocalypse in mind. In my mind, in a post-apocalyptic world, only fragments of culture remain, and they survive out of the context of their creation. Which sums up the music of Spirituality and Distortion – a blend of traditional music of Europe and Asia surviving out of context in a post-apocalyptic world of death metal and electronic. It may be a musical non sequitur to most, but in Igorrr’s world everything is fair game.

The theme begins in album opener Downgrade Desert, with a Middle-Eastern oud building an atmosphere that is immediately turned frantic with big, slow and heavy guitars, overlaid with Le Prunenec’s operatic voice that is joined by Laurent Lunoir’s guttural roars of indecipherable, yet emotive, vocals. It’s a strong beginning, letting us know what we’re in for – building the world that Spirituality and Distortion exists in, but not compromising much on the elements that make Igorrr so characteristically Igorrr. It is also the lead single for the album and as such is a necessarily accessible listen, while still subverting expectations.

Nervous Waltz follows, bringing a Baroque-inspired waltzing string section melody of violin and cello that is greeted quickly with heavy drums and an ominous choir, before a heavy metal section joins in the party, escalating the nervous waltz to rage-filled blast beats. The track then takes a turn to the ominous in a piano-choral section that increases tension. The tension is resolved with a breakdown which returns us to the initial string theme, which disintegrates to 8-bit and funky bass.

None of this should work, but all the elements are blended to bring out the most in one another, making the track so much stronger for it.

The third track, Very Noise, is essentially a drum and bass track with elements of metal. At 1:47 long, it is little more than an interlude to the ethereal harpsichord-driven Hollow Tree, but still has its own music video (which looks like how listening to the song makes me feel… slightly nauseous). Hollow Tree is more subdued than most tracks on the album, and Le Prunenec really shines in this funky triple-time chamber-music piece. Her soaring voice and the crisp bass line work well together in the song’s climax, and the momentum the album has built thus far still holds strong.

Camel Dancefloor takes us back to the Middle Eastern inspirations of the opening track, bringing in drum and bass lines to merge with a recurring motif on (what sounds like) a qanun. We are treated to Primus-esque bass riffs, Eastern violins for what is a fun dancefloor tune, before the song takes a turn to guitar riff city, turning everything on its head.

Perhaps the most straightforward song on the album is Parpaing, though. Metalheads will appreciate that it is essentially a death metal track with George ‘Corpsegrinder’ Fisher lending his trademark vocal talents and that doesn’t deviate from familiar territory of blast beats and fast riffing.

Until the 8-bit section, obviously.

Lyrically, it’s the only song on the album in English, which will no doubt improve the track’s (and the album’s) accessibility.

Death metal fans will be familiar with the territory covered by Parpaing, but Musette Maximum is a harder sell and will most likely take them by surprise, as a waltzing accordion side by side with a Cannibal Corpse-inspired track might do. But the transition, if highly contrasting, is still suitable; we have blasting drums, double pedalling and some impressive bass work going on in the background of what is a very fine waltz and overall, one of my favourite tracks of the album. Musette Maximum is reminiscent of previous Igorrr tracks, such as Cheval and Houmous, showing that the elements that made the 2017 album popular are still very much visible.

So concludes the first half of the album, and I’m not keen on doing a track by track overview of the entire album’s 14 tracks – as it is, I feel I’m pushing the boat out on your patience.

But the halfway mark does give me the opportunity to explore one of the weaker points of the album; that some of Igorrr’s ideas tend to get recycled – how many folk styles and instruments can you blend with metal and electronic before the novelty wears off? With 14 tracks, Serre, in the final tracks, does have a few wavering moments. Not to say there are ‘bad’ songs, just that a few tracks don’t offer anything that hasn’t been provided already. On their own, all tracks are well-written, but I thought Overweight Poesy, Paranoid Bulldozer Italiano and Barocco Satani were treading ground the album already covered.

One of the challenges of experimental music that needs to always be answered – how can songwriters in the vein of Igorrr be innovative and creative – in a word, random – without becoming predictable?

I don’t know the answer to that, but that being said, the second half of the tracks (I’m splitting it down the middle for my own convenience, there’s no ‘Two Act’ structure going on) include some of my favourites off the album – Himalaya Massive Ritual is the most ambitious songs, an East Asian feel with huge chugging guitar parts that evoke the scale of the titular mountain range, and features Le Prunenec delivering some soaring and soulful falsettos.

Lost In Introspection deserves praise for not aiming to be a novelty song – we are treated with a climax of arpeggiating pianos, sweeping guitars and alternating time signatures amid the EDM background. Dare I say, it’s a prog song.

The final highlights are Polyphonic Rust and Kung-Fu Chèvre, ensuring the album ends on a high note. Polyphonic Rust brings in some Meshuggah vibes with a chugging guitar that is joined in with a tasty bass line and again Le Prunenec shines in her vocal duties. Overall the song is a fun and a relatively easy listen that gives one last headbang before Igorrr sign off with what I imagine is a song about a kung-fu fighting goat – highlighting that at the heart of this apocalyptical musical project is a sense of humour.

On initial hearing, I thought Kung-Fu Chèvre bore some resemblance to Musette Maximum, notwithstanding the closing track’s vocals, in that it’s an accordion-based folk track, but subsequent listens suggest it’s harking to more Eastern European folk music, and is reminiscent of gypsy punk rockers Gogol Bordello, except on acid. That being said, ‘… except on acid’ is probably an apt way to describe many of Igorrr’s songs (give me some Rush ‘… except on acid’, and we’re talking). Chèvre is a funky, quirky and upbeat track with plenty of experimental elements that Igorrr fans will be familiar with – such as the goat’s vocal cameo, surf rock riffs and soulful vocals that range from the screaming to the elegant.

Overall, Spirituality and Distortion caught me by surprise in how many musical elements Serre is able to combine in order to create a fun – yet crazy – album that is cohesive, focused and witty. It is the longest Igorrr album yet, but it keeps your attention throughout, despite meandering a little towards the end (although rescued by two strong closing tracks). And given the audience that Serre has targeted and the expectations of that audience, I think the album has hit the bull’s eye with a blend of accessible tunes and more ambitious pieces. Igorrr’s biggest strength is no doubt the element of surprise combined with an arsenal of musical knowledge that he uses to confound you, but it needs to be noted that surprise wears out and that’s something Gautierre Serre will need to bear in mind when Igorrr produce the next LP.

On the back of this release, I’m eagerly awaiting Igorrr’s next album, whenever that may be. In the meantime, I can’t recommend Spirituality and Distortion strongly enough to anyone with adventurous taste.