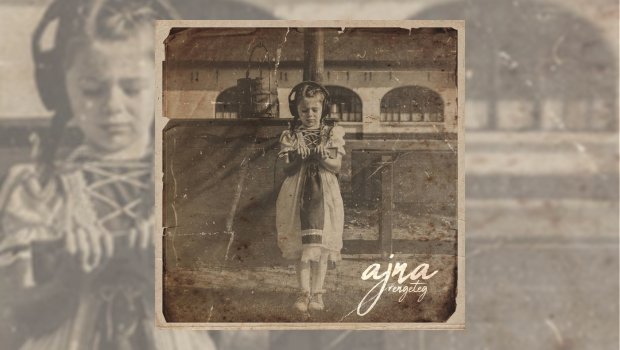 A few days ago, I found myself in possession of not one, but two forthcoming releases from two very different Hungarian post-rock bands. But apart from coming from Hungary, and being released on the same label, they couldn’t be more different. I started with aJna, because The Sound of Music told me to that starting at the very beginning is a very good place to start, and aJna begins with A, so…

aJna is a trio from Hungary who admit “We can’t describe our style and it’s good. All three of us are inspired by different musical backgrounds and these inspirations take just a small part of our music. We don’t listen to bands like us or who have similar themes to ours so we can only go after our own head while making a song. We make our own music”. And so they do. While I have described the band as post-rock, this is almost as a matter of convenience, for while the music of Rengetag, if I oversimplify, could be said to exist within a post-rock shell, as per their own words, aJna obviously doesn’t give a damn about any stylistic limitations in their music, and the album journeys between soft, melodic moments through heavy and driving riffs, taking in psychedelic, folk, jazz, and metal sounds along the way.

Beginning with birdsong foreshadowing the melodic beauty of the title track, Rengeteg eases the listener into the album, almost providing a false sense of security. For this is the most conventional post-rock you’ll hear – which is not to say it’s no good. Far from it, it’s a very groovy little number. The band have been together for a decade or so, and it shows. Everything is so tight! Indeed, were it not for the different style of sound, one could even make a comparison to another power trio who were similarly tight. Surprisingly, I hear notes of Rush (Signals-era or thereabouts) at times in aJna’s music, and certainly in this track. Those who are not fans of Geddy Lee’s singing will, of course, be happy to know there are no vocals.

A post on aJna’s Facebook page shows that the second song, and first single released from the album, B’ has been around for at least nine years now. It’s a far faster paced piece than the preceding number, and as much as I enjoy the swirling guitar floating on top, it’s the interplay of the rhythm section beneath that really holds my interest – as they did on the title track. But wait, around halfway through, the track shifts to an altogether heavier mood – almost reminiscent of Tool. The guitar is more minimal, and yet somehow more potent. And what a beautifully brutal and crushing finale.

Throughout the album, the guitar does feel secondary to the bass, and if Primus are not a big influence, I’ll be very surprised. aJna definitely come across as a bass-led band. However, the bass playing is not always reminiscent of Primus. The eerie introductory bass riff of third track Eta Carinae almost brings to mind the melancholy of The Doors, and the splashes of guitar in no way dissuade this notion. Overall, this track does seem to serve more as an interlude than a piece in its own right, but it’s entirely pleasant and not at all filler. It also leads very nicely into Spirál, with its furious drum and bass spiralling pattern. As with many of the tracks, the final moments of Spirál are superb!

Also superb are the band’s use of ambience and sound effects. Kept to a minimum, when they appear they add a real vibrancy to the sound of the album. I love the ambient and sound effect ridden intro to Nyergelt Táltos Kancacsikók. Then the music kicks in sounding like what I imagine Iron Maiden might if they were a post-rock band. Yes, I know how ludicrous that sounds, but it’s the feel I get from the music. Of course, the music shifts about three minutes in, and what scarce resemblance there was is gone. After another couple of minutes, it shifts again, and are back into Tool territory, for a very pleasing conclusion.

Hekate has an appropriately bewitching rhythm pulling us in, and maintains interest throughout with its changes. However, unlike other tracks, these are not stylistic changes, but variations upon a theme. What’s impressive is that despite the changes being minor, the effects are disproportionately large. The bass and guitar play off against each other, while the drums keep them both in line. The interplay from the three members of aJna really shines on this track.

Turbo begins similarly to Nyergelt Táltos Kancacsikók, with ambience and sound effects, but once the instruments begin, it takes a different turn, with a laidback jazzy feel. There is a real brightness to the piece. At least, until about three minutes in, when the tone turns ominous. A minute later, and it sounds more like we are in folk territory – albeit with frequent dark incursions threatening any pastoral tranquillity. This track dips and dives all over the place, yet somehow remains coherent the whole time.

Seiran is another track with an awesome introduction, again caught between jazz and folk. The bass is punchy, and predominates, although after a minute or so, the sound is almost that of the indie ‘80s (think The Smiths), and right at the tail another completely surprising and enjoyable finish. The album then comes to a close with Zsuzi Mozog, and even though it’s far too short for my liking, it’s a wonderful conclusion to a thoroughly enjoyable album. It’s a shame it has taken ten years for aJna to reach a point where they can release this album to the world. Let’s hope it’s not another ten years before the next one!