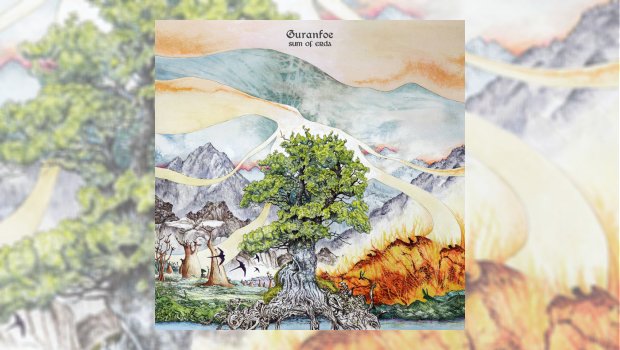 There are many bands playing the almost oxymoronic styled retro-prog, and few do it in a way that interests me. If the music is too honorific, derivative or comparable with the greats of the past, I can’t really see the point. Young Norwich band Guranfoe, on the other hand, have surprised me with their thoroughly modern sounding jazz fusion, referencing classic prog. It doesn’t sound at all stuck in the past, and as well as sounding modern, the band sounds overwhelmingly happy. It is hard for me to imagine the young, talented musicians of Guranfoe playing the technical and complicated music they do without having fun and smiles on their faces. I certainly have a smile on my face when I’m listening. As Guranfoe are a band quite local to me, I guess I will hopefully soon have an opportunity to see if the smiles are there when they play live!

Although Sum of Erda is the debut album from Guranfoe, their Bandcamp reveals they have been around for a good few years (eight, if I’ve worked this out correctly) and have a wealth of Bandcamp albums of rehearsals and live performances to listen to from over those years (I’ve not counted, but it wouldn’t surprise me if there were close to a hundred of these!). That the band have played together for some time is blatantly obvious, a quite brilliant culmination of many years spent playing live. The dual lead guitarists James Burns and Ollie Snell weave in and out of each other, and everyone locks into the groove and jams. There is as much psychedelic rock in Sum of Erda as there is progressive rock.

However, having just stated that the years of playing live shows in the band’s sound, I do have to say that, having listened to a few of the performances on offer on Bandcamp, Guranfoe have cultivated a studio sound that is actually quite distinct and different from their live sound. Yes, the time signatures are still forever changing, and yes, there is an obvious love for playing adventurous and exciting music, but this is far more Guranfoe’s own sound. And I love it! There are passages throughout where one instrument or another dominates, showing just how talented every musician in the band is. Added to the mix are additional musicians (on woodwind, strings and percussion) who add flavour in sparing quantities. I have to admit that much of the time I find myself grooving along to the rhythm section of Robin Breeze and Joe Burns, and when they take their turns to be upfront, it’s pretty amazing stuff.

The cover art, which I particularly like, lends a pastoral air that the music only hints at, in brief moments. Those pastoral passages are, as expected, quite beautiful – and also provide moments of quiet and restraint after the full-on fusion jams. One of my favourite such moments is at the end of the third track, Karu Vatsarin (which, by the way, is probably my favourite track on the album and a perfect centrepiece), leading into the equally gentle Etsinta Visions. This is the shortest track of the album by some way, and (for me, at least) works more as an extended coda to Karu Vatsarin than anything else, despite its title seeming to have more in common with the following track.

Etsinta Harvest in the Thar Sands is a quite incredible closing track, which plays out almost like a suite. The final four minutes are almost mindblowing, coming after the intricate and contemplative, almost classical beginning of the track. It’s a punchy and uplifting way to top off what has been a journey of joyful energy from beginning to end. I’m sure there was probably a concept in there somewhere (the song titles, if nothing else, suggest this), but I’m not sure what it was. When the music is as carefree and as good as this, it really doesn’t matter. I choose to just go with the flow, and Guranfoe make it very easy to do so, taking me along with them on a magic carpet ride of psychedelic bliss. I’ve never done drugs, but I can get high on music.

Guranfoe live seem to rely a lot on the seemingly endless creative energy of the band to improvise. For this studio release – although there is definitely still a tendency to jam out – the improvisations are clearly held in check. The band sounds tight and focused, yet still overflowing with energy and vitality. The five instrumental pieces are rich and varied, maintaining interest throughout. Each track has its own identity and sound, combining the warm tones of ’70s prog with grittier, more modern tones. Retro-prog this is not. I sincerely hope this band find some degree of success and recognition, as they deserve it.