Infringement is a new young progressive band from Norway, Alienism is their second release, and I have to report straight off that it has entertained me over repeated listens, and I think they have a bright future. Their style tends towards neo-prog with nods to Fish-era Marillion and IQ, so there’s a symphonic layer to much of this album, with some lovely melodic guitar and a range of keyboard sounds and textures. They also possess a flamboyant singer who is gifted in his vocal in Hans Andreas Brandal. There is a conceptual element to the album, but it is approachable at a mere forty or so minutes long. Actually, it’s not a concept really, just a theme connecting the songs, but that’s fine. 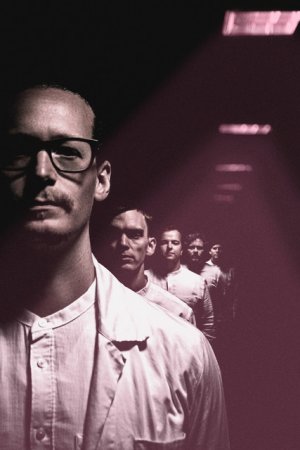 So what is it all about? Well, it is a collection of just four tracks which each chart the misfortunes of four patients in a fictional institute for the criminally insane, and their treatment at the hands of the director of the institute. Now I have to say I have reservations about being entertained by what seems a rather cliched subject of questionable taste, given the seriousness of the mental health issue in modern society, but as the band themselves state, “let us all escape reality and seek comfort in our own minds”. Ok, I’ll give it a go.

On many levels, this album is a ripping success. The band repeatedly conjure a soundscape which skillfully conveys the impression of mental instability, or outright lunacy, and one shouldn’t perhaps take the subject matter too seriously. The first song begins with a wonky lilt with acoustic guitar and musical box motif which immediately tells you that someone is unwell, and for a moment reminds me of Alice Cooper’s demented Ballad of Dwight Frye, but soon we are in a more interesting place musically which reminds me of Anubis with its symphonic minor chord melancholy feel. There are some memorable lines, like “bring the drunk to the barroom and expect him not to drink, bring the wise a question and expect him not to think”, as we examine the obsessive-compulsive patient. All very entertaining, and it’s musically strong, with stylish performances from Stig André Classon on guitar and Bård Thorstensen on keys in particular.

Triad, the second song (and not a Jefferson Airplane cover I must point out), is the standout track without a doubt. It has a more robust feel musically, with a heavier guitar crunch, and is in more Haken territory, particularly obvious in the brief acapella section. The use of this vocal interlude whilst dealing with the subject of someone suffering from ‘the dark triad’ is quite a nice touch, but there are many twists and turns in this ten-minute journey, so much so that it seems a lot shorter! This song alone proves to me that this is a talented bunch of musicians who have plenty to say.

Therapy follows, a shorter piece analysing the chap who thinks he’s a prophet. The guitar intro dances in the ears agreeably, a nice drum pattern from Kristoffer Utby, guitars sharpening their attack, then a swathe of keyboard strings as the song builds with choir effects. Brandal intones a suggested therapy to ‘fix’ the patient. The long epic closing track follows with lush symphonic keys, Rothery-style lead guitar flourishes and a pleasing bass line from Espen Larsen. At just shy of seventeen minutes, in truth this piece is a tad long, but it has some very memorable and melodic sections, even though we veer close to IQ at times. We have time changes, ebb and flow, mood swings, all thoughtfully crafted with stabs of modern synth. The pacing is good, and repeating melodies and recurring themes make for a harmonious package overall.

So why don’t I like it a whole lot more than I do? My problem is simply that I feel a band with so much going for them in terms of ability and musical flair, who have compositional skills aplenty and are well-connected enough to get Karl Groom to mix and master the album (and the job he’s done is superb), would have done so much better finding more original and inspirational subject matter. If you’re going to write about such desperate characters, they need to be believable and there needs to be some empathy. Instead we seem to be shown some kind of freak show where caged minds are prodded by a doctor who clearly needs therapy himself. If it wasn’t such an unbelievable scenario it would be horrific. So any pleasure in the musical side of things has to be tempered because it’s hard to ignore the conceptual angle as it is so central to proceedings.

I sincerely wish Infringement well, and I will definitely look out for their next steps, I just hope they can work on some thematic originality next time, as I think they might be capable of something quite special, and soon.