It has been some time since I last saw Jan Akkerman perform solo with his band. Most recent experiences were his ‘Knight of the Guitar’ sessions in which he, accompanied by the pick of the (Dutch) guitar scene, performed mainly as an orchestral leader/accompanist and found himself to be less in the spotlight. This evening would be different, armed with his latest, very well received, extremely varied studio album Close Beauty, and a tour and setlist built around recent material. Expectations were high, so it was somewhat disappointing that the string virtuoso had only attracted some three hundred enthusiasts to the number one rock theater in the Netherlands, the Boerderij in Zoetermeer. The room was nevertheless pleasantly crowded with mere fans and guitar fetishists, filled with anticipation.

The band kicks off with a number of songs from the new album, Spiritual Privacy opening proceedings. The song is played as a kind of free-style jazz session, the rhythm during the intro coming from a drum machine. It looks like some minor technical problems still need to be resolved, Akkerman’s guitar sound is far from ideal, however by the second piece, Beyond the Horizon the sound has improved greatly, fortunately. The groove is irresistible as well as the great bass playing on fretless Fender from Marez Oyens. There’s a lot of distortion on Jan’s guitar, and his joke during the introduction is not picked up by the audience, unfortunately. 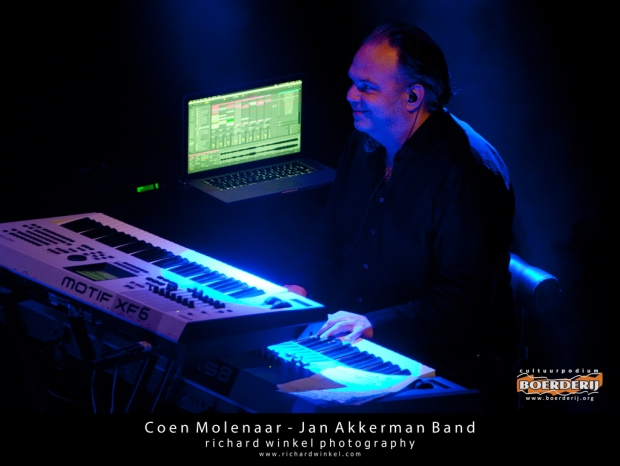 Reunion is of a completely different calibre with its contrary rhythms and jazz/fusion style. Close Beauty, the title track of the new album, features no acoustic guitar, Akkerman only playing electric during this performance, thus giving the song a heavier feel. The setlist is adjusted: “I prefer to play some more Close Beauty“, the great leader grumbles to his keyboard player. No sooner said than done, Tommy’s (50th) Anniversary being the penultimate song of the album. The smooth shuffle of drummer Marijn van den Berg, the feather-light keyboard solo of “daddy” Coen Molenaar and an excellent David de Marez Oyens on bass, make this track, with its reference to the original song, a wonderful moment during the show. But Akkerman’s sneer at Thijs van Leer in his announcement was not really called for. Sour grapes still, apparently.

It’s time for some of the older material, in this case Streetwalker from 1977’s Jan Akkerman. Swinging jazz/fusion featuring Molenaar with a light-footed synthesizer solo, while the protagonist’s guitar solo should certainly not go unmentioned. Personally, I find Akkerman strongest during this type of song: a bit up-tempo, jazzy, a tight band that knows its place and a fabulous guitarist who manages to keep his technique and speed subordinate to his feel – hats off. During Pietons, David de Marez Oyens is allowed to take the spotlight and he does so with aplomb: a brilliant solo on his 5-string bass flows from his capable hands, the audience in turn clap their hands and cheer until they’re blue in the face. The song evolves into one, elongated, session with, at the end, a small section from Hocus Pocus. 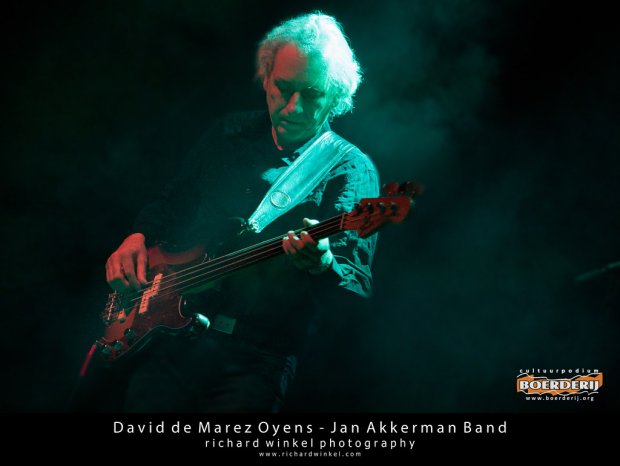 Big Sir comes from the penultimate studio album, Minor Detail, which is already eight years old. It is the starting signal for a major improvisation, mainly for guitar and keyboards. Wah wah is ubiquitous, wow, what a freak! Akkerman plays his black Gibson Les Paul, for a change, up to this point all songs have been played on a Les Paul Gold Top. The last song of the new album is Don Giovanni, a nice breather after the hefty guitar assault of the previous song. However calm and composed, Akkerman manages to break a string during one of his blazing fast sections (for fans: the D-string). Not that anyone has noticed, apart from the visible fact of a loose-hanging thread: Akkerman manages to impress equally on five strings (and perhaps even more). The audience rewards the string-breaking virtuoso with a well-earned ovation. 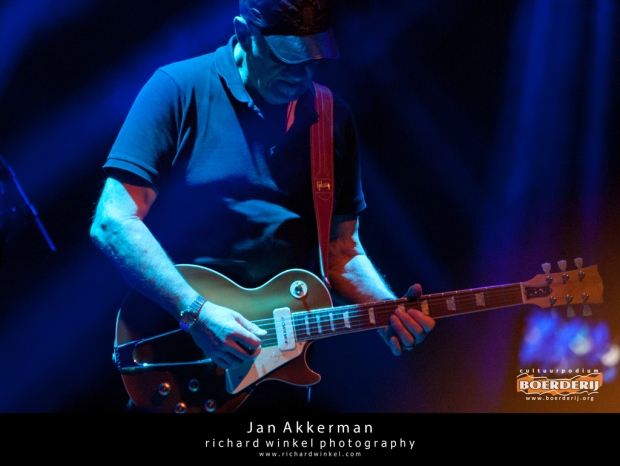 Then a surprise: Tranquillizer from Eli from 1976 is a personal favourite that had not yet appeared on any setlist during this tour. The song gets a much “heavier” treatment than normal, partly thanks to Jan’s guitar play. You Do Something To Me, written by Paul Weller, is played in a different arrangement this time, more subdued, with slightly different chords – absolutely wonderful. Closing track is old faithful Hocus Pocus (what else?), this time in a possibly even more wild version than ever before, with the inevitable second string breakage as a result. Nobody will be surprised when I tell you that Akkerman once again manages to bring the song, which he can probably play in his sleep, to a successful conclusion. I bet he would be able to successfully finish this old Focus number on four strings without major problems.

Then it’s all over, after more than an hour and fifty minutes of pure playing time. The enthusiastic audience, including undoubtedly many (aspiring) guitarists, rewards the band with a huge applause. Little hope for more is quickly suppressed, that’s all folks.

Time and time again it strikes me what an absolute gem Akkerman’s backing band truly is. OK, all of them have been playing together for quite some time, but that fact in itself is not a guarantee for quality, quite the contrary. However, the close-knit ensemble that Akkerman has gathered around him rightfully deserves the title of “amazingly excellent”. If “tight” was a criterion for a band, then this group achieved highest marks on its report. The main reason for this is the sheer joy of playing, fun is visibly being had as the looks of enjoyment, appreciation and respect are countless and inspirational, reflecting on the audience as well. 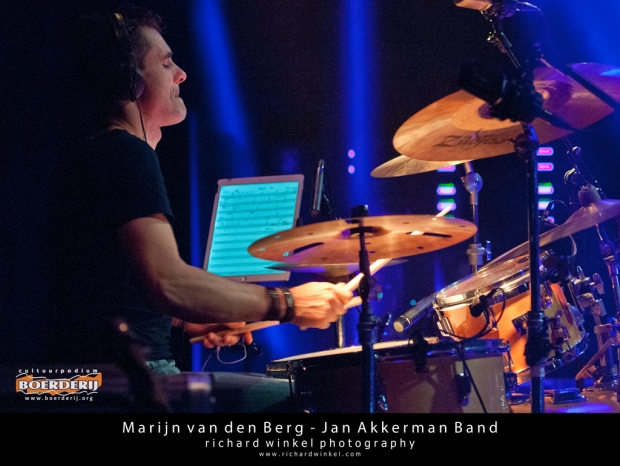 It is impossible to select a star player: perhaps super tight drumming youngster Marijn van den Berg, his style sometimes reminiscent of one of his illustrious predecessors, Hans Waterman. And what about musical director ‘daddy’ Coen Molenaar, Akkerman’s trustworthy musical companion for decades? His gaze constantly focused on the tall guitarist in front of him, watching for the right moment to send his musical ‘pass’, such as Özil trying to connect with Aubameyang (please substitute your favourite players). His keyboard playing is swinging, at times supporting, then again soloing, jazzy and funky, the Dutch version of Bob James and/or Dave Grusin. As far as I’m concerned, this time the trophy for “man of the match” goes to bass player David de Marez Oyens, the silent but ever so reliable powerhouse. I am constantly impressed by his playing, whether it is fretless or fretted, rock, funk, jazz, it doesn’t really matter, homage.

Well, what about Jan Akkerman himself. What can one say about the undisputed Dutch master on six strings, the Rembrandt of the guitar? It is a pleasure to see the now 73-year-old Amsterdam-born guitarist at work. He’s still at the top of his genre and has demonstrated with his latest album that he has not lost any of his prodigious playing or composing qualities. Alternating between lightning fast, then whisperingly soft, almost tenderly stroking the strings, from metal to funk and back again, in that characteristic style, he makes it all look so easy. Easily communicating with the audience, having fun with his fellow musicians on stage, relaxed. Entirely dressed in black, with a polo shirt and inseparable cap, he still looks great. Hopefully ready for a new decade and lots of new (and old!) music. 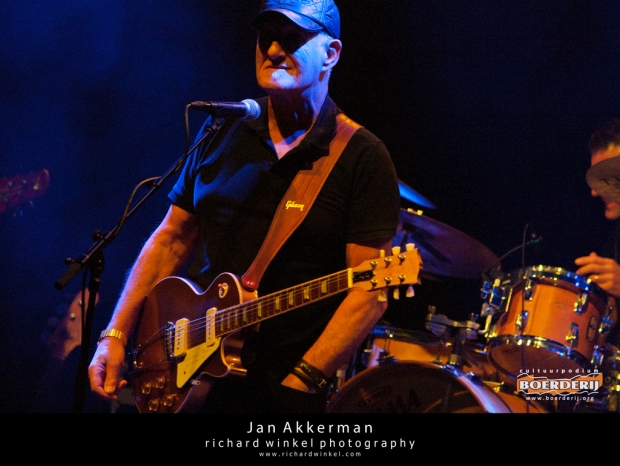