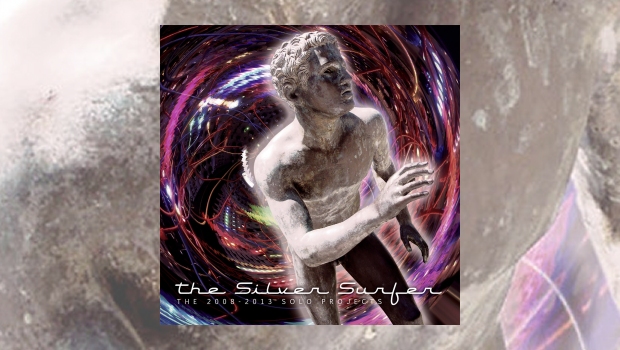 December is a black hole for new releases. I often wonder why anyone releases anything at a time of the year when most people are looking back on what has already been released, and have little money to spend on additional releases. In that last month of last year, Rivendel keyboard player Oscar Belio chose to release four albums worth of material under the name The Silver Surfer. I think that is a great shame, as they will inevitably have sailed under the radar.

I first came across Rivendel about five years after the release of their 1996 album, The Meaning. It would be another ten years or so before they released another, and when it was released, it was something completely different than what had come before. In retrospect, The Meaning makes quite a bit more sense. It is almost representative of the progression of sound between albums, within an album. Though that is perhaps overly simplistic, the first song does echo the debut, while the third album foreshadows the next album (at this stage, still two decades away!)

With the release of The Silver Surfer albums, we are given more retrospective explanation of how the changes came about between The Meaning (1996) and DHD (2015). The four albums worth of material were recorded between 2008 and 2013, and DHD makes perfect sense after listening to these. I sincerely hope, though, that this is not the last we hear of The Silver Surfer. For while Rivendel’s most recent release (Sisyfos) was superb and made my end of year list in 2018, I want to hear more of The Silver Surfer as well as more of Rivendel!

The first Bandcamp tag of The Silver Surfer releases is “Berlin school” and this is a very good indicator of what you will be hearing. Classical music and mystique concrète motifs abound, in a great swirling sea of progressive electronic Kosmische Musik. It’s gorgeously Floydian, filled with spacey ambient soundscapes, without ever sounding derivative. My favourite Pink Floyd album is Wish You Were Here, and my favourite Floyd song, Shine On You Crazy Diamond. If you are the same, you will love The Silver Surfer.

Unfortunately, given that the Silver Surfer releases span four albums, I have found it hard to keep this review as short as I would like to. I did consider reviewing two albums in one review, and the other two in another. However, I find the way I listen to them prohibits such an easy division. This is entirely my fault, though, as I have ended up listening to them in a somewhat non-linear fashion. In fact, alphabetical! I have listened to the albums several times, in several different orders, but for me alphabetical works better than chronological.

Thus my listening journey tends to begin with Blueshift (2011-2012), which is the only album of the four that provides one continuous suite of music, which astounds me in the way it so carefully creates sounds that conjure the appropriate visual imagery. Listen to the music, and you can see the change of seasons.

Aestival Solstice sets the scene with some lovely electronic prog, before Wavelength Shift amps up the Floydian influence. Wavelength Shift is, quite frankly, beautiful. Rivendel is a band quite clearly influenced by King Crimson, and this shows up to a lesser degree in The Silver Surfer. With The Wrong Chord of Autumn, the Crimonesque notes hinted in the previous track are brought to the fore. Autumnus Hiemare provides the same electronic prog, Floydian and Crimsoneque mix, but in a manner almost like a short reprise of all that has come before, with the elements introduced in the same order. It also seems to serve as much as reprise of what came before, as an introduction to the following track, Andante Esoterico. This is a slow, dark and brooding piece. It is beautiful, and it conveys a real sense of time passing with its metronomic rhythm.

Dance of the Souls in the Wind begins in my head with the vision of a snowfall. A delightful airy swirling and descending dance, again very Floydian, and again with very Crimsoneque notes. The track takes a turn about two and a half minutes in with one such Crimsoneque stroke. Has the sky suddenly darkened? It passes, and the song ends with more or less the same beautiful falling notes as it began – though it now sounds more like rain than snow. Finally, the Arrival of Verna is bright and spritely, lush and lively – just as one would expect from the title. And actually, this is why I find it hard to listen to just one album at a time. For me, the end of Blueshift is not entirely satisfactory. It’s too, for lack of a better word, nice. I like a little darkness present to emphasise the light.

So onto I’m Friends with Oniris (2008-2011). I really can’t explain it, but Kafka at the Shore sounds as if it should have followed Arrival of Verna. My only guess is that because some of the recordings from both Blueshift and Oniris were made in 2011, and maybe these two were created around the same time. Regardless, Kafka just sounds awesome after Verna. It’s like spring, but a subversion of spring. There might be light, but there is darkness and malice attacking it from all angles. The music is angular, and quite malevolent sounding at times, however, about four minutes from the end, it is stripped back almost entirely to a lone piano that is simply gorgeous. Although this provides pretty much the only solace in the track, it doesn’t last, and the menace returns, albeit muted.

At this point, I can stop listening to Oniris, and this is why I find it hard to review The Silver Surfer as individual albums. If I listen to Blueshift, I will always listen to Kafka immediately after Verna, even if I do not listen to the remaining Oniris tracks. The same happens throughout the four albums, which is not to say they are ever lacking individually, so much as I have settled into my own listening patterns.

For an eponymous track, the second track of Oniris, The Silver Surfer sets out the stall fairly well. An electronic and Floydian soundscape that is just a little unsettling. This is followed up by Les Caves au Bord de la Mer, which starts with the quietest and most minimalist music yet. Even when additional layers and volume are added, it merely simmers with intent. The tension is palpable, without any real threat it will boil over. That said, after five and a half minutes the track really starts building, and always leaves me grinning. Definitely one of the more Crimsonesque numbers from The Silver Surfer. Finally, from this album, we have Alone in the Desert of Myself. Again, a piece which begins in a quiet and introspective way. This time, though, not so menacing, and far more melancholy. While the previous track had brooding intensity, this piece is just brooding. I have used, and will use this adjective far too much in this review, but Alone is beautiful.

And once again, I find myself running over to another album. Just as Kafka follows perfectly from Verna, so does Advocacy for a Sustainable Weirdness from Shy Sister Zen (2011-2013) after Alone. The static-filled start of Advocacy comes in perfectly after the abrupt ending of Alone. The track proper starts after about half a minute, but those introductory noises act as a perfect segue. Even the track titles go together well in my mind, with a possible implication being that one first dwells upon oneself, before accepting oneself. This long piece starts off relatively tuneful before jumping full-on into electronic bleeps and blips. At times an acoustic piano appears to confront the electronics but it is overpowered, and retreats. It returns, and retreats, but ultimately rather than playing the beautiful notes, it is playing the weird ones. Advocacy for sustainable weirdness indeed! This track is at times dissonant and discordant, but anyone who knows prog, knows that played in the right way, that can work. And yet, by the final minutes, some resolution seems to have occurred. Beauty and weirdness can do-exist after all…

Juego de Equivocos starts off sounding very sinister, so in a way similar to Advocacy, but behind that, we are back to the Floydian beauty we’ve otherwise come to expect. Advocacy appears to be an outlier rather than the norm when it comes to The Silver Surfer. Nighttime Suite follows in a similar vein. Less sinister, more mechanical, still Floydian. About halfway through the electronic bleeps and blips of Advocacy are back, but this time they are more melodic – almost like birdsong or crickets chirping. And then that comparison becomes overt. What has sounded mechanical, sounds more natural. Everything is suitably peaceful, and I guess this is the dead of night. This lasts until the last couple of minutes, when we hear what I can only assume are the stirrings of dawn, and we end with the birdsong. This is one of several truly evocative pieces where the music is powerful enough to provoke images without recourse for vocals.

The Dark Period begins in almost classical fashion, before returning to the machine-like rhythm that began the Nighttime Suite. Before hearing this track, I assumed that the dark referred to the night of the previous track. After listening, I think it is more about the nature of the piece. Dark sounds as if it follows the dawn, rather than precedes it. It is daylight, but any day can be dark, and this track is oppressively so. It’s like a culmination of the last two tracks. The sinister Juego and mechanical Nighttime coalesce into this Dark Period, and it is absolutely one of my favourite tracks across all four albums.

As Dark fades out, so Nanga ’37 fades in. Again, it sounds to my ears a perfect sequence, and a natural follow on, leaping between albums once more, as Nanga is the first track of The Time’ Chime (2009-2010). Nanga is quite dark itself. I presume the title refers to the ill-fated 1937 German expedition to ascend Nanga Parbat, when all climbers died. It would be hard not to convey that in music without sounding a little dark. Certainly, the music seems to follow an ascending rhythm, and about halfway through we are assailed by the sounds of wind. The music becomes quite intense. After this, the piece becomes quite bleak and despondent.

Jurassic Party picks up the pace – and pace is the operative word. It sounds like it begins with thunderous footsteps of dinosaurs. It’s heavy and plodding, but not at all ponderous. This is another of the more Crimonseque pieces, and it provides welcome relief after the comedown of Nanga. It is followed beautifully by Panthalassa’s Blues, where we plunge from the giants of the land, into the deep blue sea. Once more, the imagery provoked by the music is amazing. It sounds watery, it sounds immense. These two ancient themes are bookended by two pieces from more modern times. Indeed there are only four years between the Nanga ’37 incident and the beginning of The Siege of Leningrad. Musically, these two have a lot in common, too, although Siege is more sustained and subdued.

Overall, The Silver Surfer has created a series of pieces that can be listened to together or in isolation. A lot of the tracks sound as if they are part of a suite, but all can be listened to individually. Clearly, given the way I have created my own personal preferred playlist(s), there is a lot of scope for a listener to find their own pattern. I’m sure Oscar Belio did not expect someone to find as much enjoyment as I do, from listening to the four releases in alphabetical order of their titles, but even without words, The Death of the Author persists… 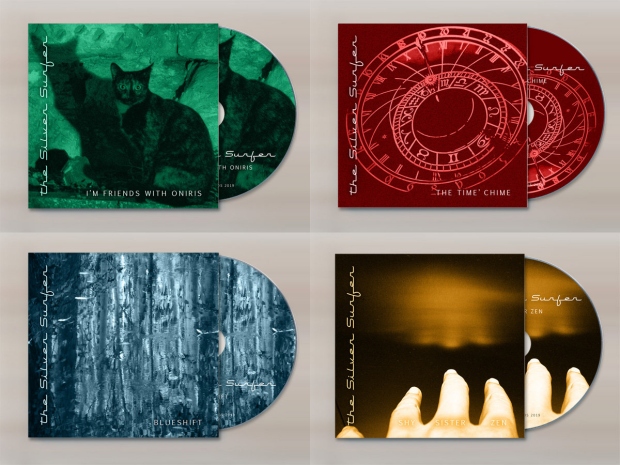