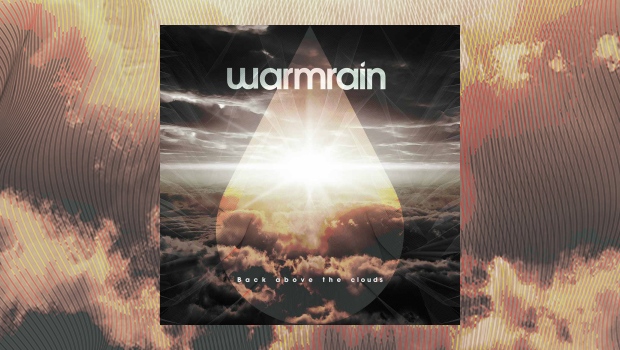 Warmrain – Back Above The Clouds

In the summer of 2019 Warmrain finally released their ambitious double album Back Above the Clouds, in a prolonged process with roots way back before their original 2011 E.P., Absent Friends. In a  PROG magazine interview in 2011 main songwriter Leon J. Russell underlined that the album would not be finished until it was ready. However, although he said ‘taking enough time is important’ it is doubtful that he thought it would take another eight years for the album to emerge! Quite apart from their obvious attention to fine detail and quality production, in the intervening years Warmrain’s band members have all experienced significant loss and life-changing experiences. As well as inevitably delaying their art these experiences have also had a sorrowfully obvious impact on the content and nature of the music.

In that context one has to ask: Has the wait been worth it?

Well, the short answer is: Mainly Yes… (with some reservations!).

This is an album which is soaked in sweet melancholy, drenched with emotions and finely played melodic rock. Warmrain describe themselves as a ‘quintessentially English melodic art rock/prog rock band’, a description apparently partly coined by The Pineapple Thief, indicating they yearn for the sunlit meadows once inhabited by Pink Floyd, whose influences thread very clearly through this album. The songs are presented as extracts from journals, documenting thoughts and feelings as the main protagonist goes through heart-breaking loss and the subsequent path to find ways to cope and rebuild a life. The album commences rather bleakly with Fading Star, opening with an acoustic guitar intro joined by rather stately drums and a sonorous electric guitar, with an atmosphere reminiscent of the echoing The Sky Moved Sideways by Porcupine Tree. The tempo and power rises as the emotions become more raw:

“Another hero exits stage left, Another star has just burnt out

The sky above seems to have darkened, My certainty has turned to doubt.”

A more Eastern sounding guitar and thundering drums enter, and an insistent Kashmir-like riff underpins the closing lament: I can’t believe my heroes are dead”.

This is a very impressive opening piece and emphatically underlines the theme of the album. The sorrow continues with a re-working of Absent Friends, previously heard in 2011. Gentle acoustic guitars are to the fore again with softly sweet vocals from Leon J. Russell pouring his heart out with the telling little details that actually say so much to anyone suffering loss:

“I sat down to watch the birds fly, from your favourite chair.”

The emotion of Absent Friends is beautifully enhanced with a sweetly flowing melancholic extended guitar solo from Matt Lerwill – this is not flashy virtuosity but sensitively judged musicality to express the feelings of the song. It’s a heartbreakingly beautiful song which does conclude with some hope:

The strength and melodic quality of the opening couple of songs, Fading Star and Absent Friends, is utterly remarkable, and would probably match the opening of any other album released in 2019.

The subsequent dream-like Running out of Time, with its vocal seemingly suspended in the air, and the following instrumental Alone in Silent Harmony continue these themes in a very similar vein musically. I Should be Seeing Stars by Now glides in airily with a softly chiming acoustic guitar and suitably floating electric guitar notes underpinning the speech of a pilot talking to his passengers. This piece feels like a lament for lost childhood, the purity of vision and emotion felt by children that gets diluted and distorted as we get older. Russell states in the sleeve notes his belief that “we all come from a source energy and that source energy has a frequency of vibration”, which become “shaped, clipped off, inhibited” as we get older. He feels that we need “reconnection with the child within… reconnect with the core aspect of your being”, and within the storyline of Back above the Clouds it is the child within who rescues the man. I Should be Seeing Stars by Now is a piece filled with that yearning lyrically… but here is where the reservations for this reviewer start to seep in a little. The musical palette to describe these themes and emotions remains within a fairly limited range – of course, the sorrowful nature of the subject matter will influence the sounds that can be explored, but as skilfully and as well as it is written and played there is a growing feel as the album progresses that we have already trodden this ground in previous pieces.

New Dawn is notable as being the song which helped name the band as it’s working title was ‘Warm Wain’ which the original drummer in the band, Steve Beatty, suggested would be a good name for the band, and it stuck. To the band, the original song title symbolised “nature’s baptism, the feeling of the warmth of the sun while being rained upon” and listening to this fragile music suspended somewhere between delicate acoustic psych-folk and denser, darker Floydian soundscapes one can see why they felt it was an appropriate name for their band, and they re-named the song instead:

The gossamer-thin Metamorphosis which follows marks the end of the first album, echoing the confessional perspectives and soulful folk subtlety of John Martyn, and indicates that the story takes a turn from ‘The Man Remembers the Boy’ opening disc into the redemption of the second disc, ‘The Boy Rescues the Man’. However, before we move on there is an uncredited ‘secret’ bonus track as Warmrain appropriately move from the gentle precipitation of New Dawn into a wonderfully regal and atmospheric cover of Here Comes the Rain Again by The Eurythmics, which seems entirely in keeping with the feel and flow of the album.

This cover of Here Comes the Rain Again features Craig Blundell (who plays with Steve Hackett, Steven Wilson and Frost*) on drums and Prog’s ‘Renaissance man’, John Mitchell (of Lonely Robot, Kino, Arena and Frost*… amongst others!), on keyboards, backing vocals and the second electric guitar part. Blundell and Mitchell certainly apply some fairy dust to this sparkling track with its soft, lush guitars and restrained power in the chorus, and it’s certainly a highlight on the album.

The second CD commences with A Hundred Miles High and there is a sense of less tension and more optimism as the man attempts to reconnect with the feelings and dreams of his boyhood self:

“They could say what they liked, I didn’t mind,
Within the freedom of my thoughts I was a hundred miles high.”

A fluid slide guitar sound eases us smoothly into Live the Dream and we are taken on a flight of imagination borne aloft by airy guitars, breathy vocals and gentle drums. Free Now follows in a similar vein as the protagonist realises some form of redemption… but once again we hit upon the reservation felt by this reviewer on the first disc as we seem to re-tread musical and lyrical themes already covered so beautifully. Lovely as it sounds, again one cannot escape a feeling of ‘sameness’ in some of the songs. With material of this quality, Warmrain need to have more confidence that they have conveyed very effectively and sensitively what they wish to do without feeling the need to somewhat hammer home the point – albeit in very delicate and rather touching ways!

In some ways this repetition of tone and feel actually detracts from some of their more effective moments as the listener is almost overwhelmed with too much of the same thing.

The outstanding Flying Dreams is re-booted from their 2011 E.P. Warmrain have added more atmospherics, sound effects and layers, with a feel so light and magical the listener feels like they could simply step off a cloud and just fly and soar through the sky in a moment of liberation approaching redemption. It’s a  majestic piece of evocative melodic rock, deceptively simple and yet so beguiling in its execution.

The album comes full circle from the opening melancholy and dark despair of Fading Star to the penultimate optimism and light of Luminous Star as the man reaches some sense of resolution with himself and his memories of a lost loved one:

“When I stop to think of you and all the love you brought ‘I come alight inside.’”

Warmrain continue to tell their story with the same melodic palette employed more or less throughout the album, which segues into the largely instrumental and the rather insistent and hypnotic finale Equilibrium.

So where does that leave us with Warmrain’s Back above the Clouds?

Well, let’s get the reservations out the way first and rely upon some good old fashioned clichés. This album may actually prove that it is possible to have too much of a good thing – in that some of the admittedly enchanting musical elements and lyrical themes are simply overused, giving a sense of ‘sameness’ when perhaps the album may have benefited from a little more variation. In short, sometimes ‘less is indeed more’. One wonders whether a double album for a debut was rather over-ambitious? However, putting aside those observations (and some may not have shared those reservations) there are far more positive things about Back above the Clouds.

This is a truly remarkable debut album, with a mature, confident, rounded style. The production is very finely polished  and utterly pristine sonically. However, what raises this album well above the ordinary is the authenticity of its emotion and the purity of its purpose. The depths of true sorrow and the comforts of solace and redemptive realisation palpably permeate the core of these songs. Leon Russell has described their album as a ‘healing tool’ for those that have experienced loss and states that’s Back above the Clouds is ‘a true story adapted to appeal to everyone’.

Warmrain have succeeded in creating their own musical and spiritual baptism in which we simultaneously feel the rain of sorrow and the warmth of love, and that truly appeals to us all.

*(now part of the band) along with new drummer Jon McSwiney