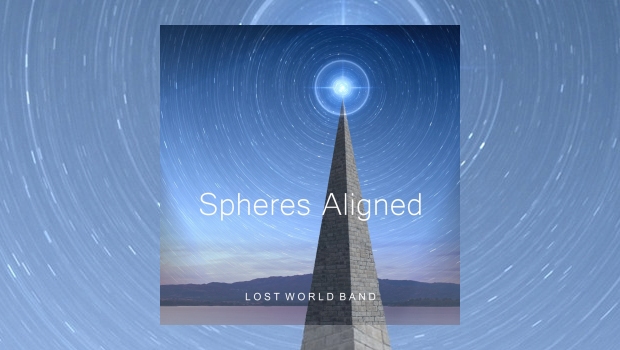 Moscow based Lost World Band formed in 1990, comprising three classically trained students, Andy Didorenko on violin, guitar and vocals, Vassil Soloviev on flute, and pianist/producer Alexandr Akimov. Between 2001 and 2016 the band released five studio albums, a live album and two classical releases, however the trio format proved difficult for their performance-oriented band sound, so additional members have come and gone along the way. The core of Didorenko and Soloviev remain with the addition of Yuliya Basis (keyboards), Evgeny Kuznetsov (bass) and Konstantin Shtirlitz (drums) for this recording. Alexandr Akimov is now involved with the mixing and mastering.

Listening to Spheres Aligned for the first time, I was pleased at having discovered this band as they have a number of crossover sections, for instance Aligned starts off with a strong rhythm, with intensive violin and flute work, but as the music continues it becomes reminiscent of the Rock Progressivo Italiano (RPI) scene. Rockfall, on the other hand, opens with a keyboard fanfare, leading us into areas of jazz/fusion with a distinct AOR feel. Didorenko’s guitar and Kuznetsov’s slapping pop sounds on the bass show that these musicians are revved up and ready to go.

Running In The Sun is another dynamic track with innumerable, complex changes, making strong demands on the instrumentalists’ prowess, whilst the complex vocals add another dimension to the sound.


By way of some respite is the beautiful Aise, a solo piano tune performed by Basis. This nicely leads into one of the album’s gentler moments, the ballad Sail Away. The folky instrumental Crystallized conjures Canterbury whimsy mixed with Songs From The Wood-era Jethro Tull. The gentler Lighter Than Air retains some of this whimsy, but it does highlight one of the drawbacks, for me, of Spheres Aligned, the vocals, which are just too lightweight for the music across the album. Where the band excel are in the tracks such as Pressured, which follows, an instrumental tsunami with all the band sweeping across their instruments. Didorenko and his team are at full force here.

I have to say that Spheres Aligned didn’t grab me fully, musically the band are excellent, the tracks full of fire and excitement and replete with great music and musicianship, however the vocals just didn’t click with me. In many respects Spheres Aligned would have been much stronger as an instrumental album. Spheres Aligned is a varied and interesting release and despite my reservations on the singing, this is somewhat outweighed by the fine music to be found on the album.