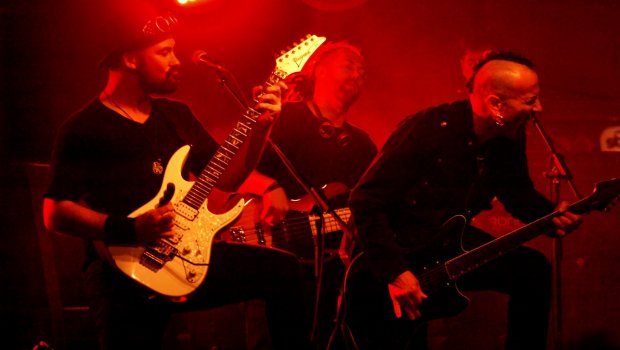 Southern Empire announced themselves spectacularly to Europe with their first ever gig outside their homeland of Australia in fine style with an imperious and impressive set in a packed Arena 2 at the HRH Prog festival in North Wales.

Featuring mainly songs from Civilisation, one of the best progressive rock albums of 2018, Southern Empire displayed great confidence and quality with an assured and remarkable show. Festival gigs are a challenge for any band with very little time for an elaborate set up, often little or no time for a sound check, and having to compete for attention with other acts. Therefore, generally festival gigs do not often reach the heights of headline concerts which have more preparation time. Festival gigs that truly blow this reviewer away are not often witnessed – the spellbinding show by Discipline at Summer’s End Festival in 2015 springs to mind – but on Saturday Southern Empire added to that short list of truly legendary festival gigs, with an astounding show which totally captivated an enraptured crowd, many of whom were unfamiliar with their material. This relatively new Australian band put on an outstanding show which showcased their dazzling abilities to combine power and subtlety with stellar musicianship and charismatic performance.

Southern Empire was set up in Adelaide by ex-Unitopia keyboardist Sean Timms and vocalist Daniel Lopresto after Unitopia split in 2013. They soon recruited the impressive talents of Cam Blokland on guitars, Brody Green on drums and Jez Martin on bass. Their eponymous debut album in 2016 was based on songs Timms had already been devising for a Unitopia album that would never see the light of day. It was a notable debut and indicated this was a skilled band with a very promising future. However, it is with their second album Civilisation that Southern Empire have fully realised their own distinctive style, with the album sounding much more of a whole band project, creating epic widescreen music filled with memorable hooks.

An incendiary performance of the catchy Forest Fire, from the debut album, immediately underlined that this was a class act with the musical chops and melodies to win over any crowd, and the HRH Prog audience were soon totally going with Southern Empire’s impressive show. Daniel Lopresto displayed his outstanding vocal quality, but also demonstrated considerable ability on the guitar. Following lengthy song Cries for the Lonely, co-written by Timms, Blokland and Green, was an ideal opportunity to show the versatility of Brody Green on drums, skilfully combining power and touch with precision. Similarly, Cam Blokland was sensational on guitar, as adept with technical solos as he was with more subtle textures.

The epic The Crossroads was the centrepiece of the whole show, clocking in at around 30 minutes, but it’s the very high quality of the music and not the length of the song which truly marked out this piece. In its early days this was going to be a vehicle for Unitopia, but Timms brought it to Southern Empire and the whole band contributed their own ideas and creativity to make it a Southern Empire piece. Jez Martin anchored the musical leviathan superbly on bass as the song journeyed across a range of musical styles, some with an Eastern hint. This is heavy Progressive Rock but they are clearly very able to throw in all sorts of influences with aplomb. The musical palette was completed by fine American saxophonist and flute player James Capatch, who added subtle artistry amidst the musical power. Towards the rear of the stage Sean Timms commanded the whole performance with his usual technical skill and emotional performance on keyboards, clearly proud of the stunning show his band were dishing out so superbly.

As the epic cinematic sweep of The Crossroads reached its wonderful conclusion the instantaneous and universal reaction in the Arena was a spontaneous standing ovation from the whole hall. The crowd could not help leaping to their feet, so impressed with what they had just witnessed… and remember the great majority of this crowd would have been largely unfamiliar with the music of Southern Empire, such was the impact of this show and the tremendous quality of the songs. A rocking Goliath’s Moon finished off the set powerfully and yet again the crowd were on their feet and the the place went bonkers…

Definitely BAND OF THE WEEKEND and simply one of the best festival gigs I have ever seen (and I’ve seen a few!!). Southern Empire are touring Europe and the U.K. with the band Damanek in November – if you get a chance to go and see these guys DON’T MISS the chance – this is a REAL CLASS ACT!!

(A full review of the whole HRH Festival will follow soon on The Progressive Aspect.] 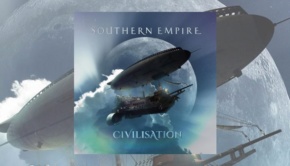