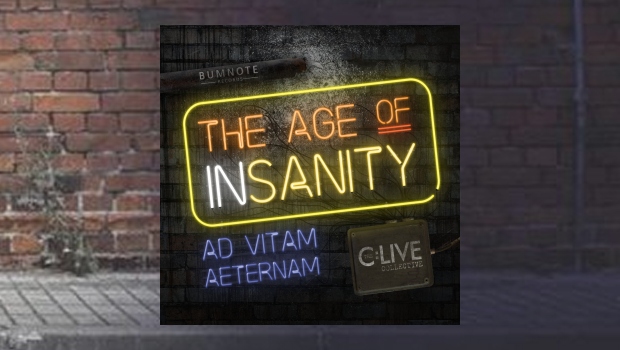 C:Live Collective – The Age of Insanity

This is an age in which a mendacious, manipulative manchild lunatic has taken over the Asylum whilst elsewhere a blackened, ruined stump of a Tower shamefully overshadows a nation that’s lost its moral compass, amidst the stench and filth of a rising tide of lies and fear…

…so what better time than to release this fascinating and challenging album which casts a questioning and sceptical eye over current proceedings?

The main man behind the C:Live Collective is Clive Mitten from the notable progressive rock band of the 1980s, Twelfth Night. He was induced to come out of musical ‘retirement’ after 30 years as a powerful expression of his anger regarding the abuse and manipulation of the press and social media in modern society, after his wife was unjustly vilified by a U.K. tabloid newspaper. Clive largely wrote the classic Twelfth Night album Fact and Fiction (soon to be re-released in a ‘Definitive’ 3 CD edition), along with vocalist/lyricist Geoff Mann, in 1982. The context of the times of that truly outstanding progressive rock album, laced with biting social satire and commentary at the height of Thatcherism and in the shadow of nuclear annihilation in the Cold War, seem just as timely in these troubled days, therefore it is no surprise that Mitten partly draws from that well of inspiration but, unlike some artists, he does it in a very different and imaginative fashion.

The Age of Insanity is a fascinating debut album from this new band, featuring Fudge Smith (previously of Pendragon) on drums, the multi-talented Mark Spencer (previously of Twelfth Night) on guitar and vocals, and Stephen Bennett on piano and keyboards. C:Live Collective launch in aptly with The Fifth Estate – Part One (The Dictator Speaks), a radically updated version of Twelfth Night’s classic We are Sane. This piece announces the band as a bold, imaginative and truly progressive act – this is a modern, pulsating and intensive take on a classic song with sinister, dramatic and impassioned vocals from Spencer. Mitten atmospherically orchestrates the eerie opening with effective but restrained sound effects, before thundering into a bass driven section with Fudge Smith pounding along as Spencer spits out:

“Excess profit has the clout to spread the message We are Sane! Not Insane!
She reads about a will to power in papers full of lies…
… As words of judgement pour out of the Mouths of those who make their mark.”

This is powerful stuff both musically and lyrically. As someone who has followed Twelfth Night since the very early days I was curious (and a little fearful!) as to what they might do to what is possibly the best song Twelfth Night ever released… but as this savagely re-imagined version brilliantly poured out of the speakers I knew we were in very good hands. After all, Mitten wrote the music and understood what the song meant, and has used his emotions and skills to re-cast the song with added bite and impact. Anyone expecting a tired re-tread or a slight tweaking of the Twelfth Night song is in for a shock… and anyone unfamiliar with the original will hopefully be mesmerised.

The Age of Insanity then moves off in a totally different direction and wisely avoids returning to Fact and Fiction territory again until the finale. Resonating from that album is entirely appropriate and inspired as a jumping off point, but Mitten has moved on in so many ways since those early days in a career which has lain dormant for over 30 years.

The next three instrumental sections of The Fifth Estate meld together various styles including orchestral sounds, trance dance rhythms, jazz inflected sections and rock. C:Live Collective are not trying to resurrect early Twelfth Night, fine as they were in their time, nor take the safe ’70s style route. This is complex music with a mixture of styles – it’s difficult at times to predict in which direction a piece may go. Truly progressive and challenging, and definitely more artistically daring.

As instrumental pieces there is inevitably a cinematic quality, with occasional sound effects suggesting images, and even a reference to the Vera Lynn song The White Cliffs of Dover in Part Two. This allows the listener to let their own imagination run riot over the 30 minutes plus of the three instrumental sections as at times stirring orchestration sweeps over you and Mark Spencer carves a soaring guitar section high over the piece. Mitten’s bass, almost funkily played, drives along the start of Part Three before an organ section eerily resounds, descending into a powerful synth laden piece, powerfully supported by Fudge Smith’s drums. Part Four pulsates with dance beats and rhythms, before a seemingly more optimistic and anthemic section with orchestrated keyboards swirls dramatically over Mitten’s distinctive bass and Smith’s excellent drums. Like sun breaking through the clouds the piece ends with emotive keyboards in a New Dawn. Framed in such an instrumental way, this album is a challenging listen at times and can feel a little like a work in progress. A fully vocal version of the album is due out later this year, and with such an imaginative and diverse instrumental backing it will be fascinating to see how it progresses.

The finale of This City is London takes us back to Twelfth night in more ways than one. It is based on This City from Fact and Fiction with lyrics originally written by Geoff Mann about his home area of Salford and Manchester. C:Live Collective have re-written this with a fresh perspective on London in a post Grenfell world. The images and thoughts evoked by the original version are still all too real, whatever city it is set in. Sadly Geoff Mann died in the ’90s, but aptly his son James Mann sings this new version of his father’s song with great feeling, ably and powerfully supported by Mark Spencer. Once again Mitten steers away from a simple re-tread of the Twelfth Night music and presents the piece with synth driven beats and at times appropriately diverse reggae rhythms. Mitten has also adapted Mann’s original lyrics to reflect more modern but depressingly familiar themes:

In the booklet, interestingly designed by David Read, Clive explains ‘estates of power’. Originally defined as the church, nobility and people, the press and news later became the ‘Fourth estate’. He now describes the abuse of the Internet and the social media as the ‘Fifth estate’, fanning hatred, “the tool of choice for trolls seeking ‘Lebensraum for megalomania’.” It’s difficult to argue against that view when our social media and news is so manipulated and distorted, but maybe as long as there are musicians such as C:Live Collective out there willing to challenge those views in such an artistic and powerful manner there is hope that in an Age of Insanity sometimes sanity can still prevail. This album feels like the start of a journey, as an evolving piece later in the year.

If you have an open mind try this album – support imagination and independent thinking… after all, none of us really want:

All eyes fixed upon the conductor, Baton taps inside the brain…