“That was the closest thing to Pink Floyd you’ll ever see!”

The 23rd of September 2015 marked David Gilmour’s return to The Royal Albert hall for the first of five concerts to coincide with and celebrate the release of his new album, Rattle That Lock. 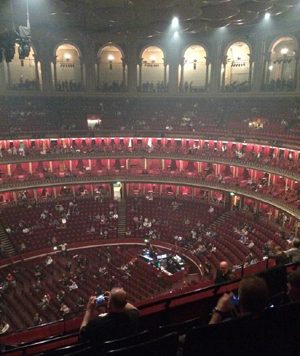 As soon as the lights went out, the roar of the crowd rose up high into the darkness; echoes of expectation were heard around the unique ceiling of the Royal Albert Hall only to be instantly struck silent by the first sombre and heart piercing notes of David Gilmour’s guitar. A single illuminating white light shone down upon him as his playing commanded the attention of every person present. There are a lot of fantastic guitar players in the world, but to witness a man who can silence an entire world famous venue upon striking a few notes is truly breathtaking.

When two young men in the crowd to the left of you can put their hands to their mouths and have tears in their eyes, the significance of the performance you are observing is truly emphasised, especially when you find out they have travelled from Denmark to see this show. Only at the High Voltage Festivals of 2010 and 2011 in London have I witnessed such determined and dedicated fans willing to pick themselves up and find the time to make sure they don’t miss that one special night that will stay with them for a lifetime. 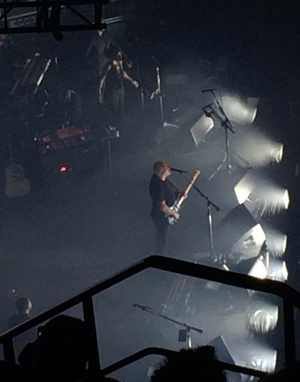 Starting off the evening’s performance with three songs from the new album was a refreshing reminder that the “Guitar and Voice of Pink Floyd” can turn his hand to more than simply playing the classic Floyd tracks that every fan expects to hear. The now familiar French railway jingle that inspired Gilmour to write Rattle That Lock opens the second track of the evening and echoes around the Royal Albert Hall to generate automatic smiling, nodding and fist-pumping from the now illuminated audience. The following chorus has many more of us automatically singing “lose those chains” in reply; such is the power of the track from an album released less than a week before this show.

Performing Wish You Were Here so early on in the evening truly reveals the strength of Gilmour’s back catalogue. The music was so immaculately executed that it could have been played directly from the record, the resulting signs of strong appreciation from the crowd were evident; highly determined applause and cheers soared alongside the opening guitar playing and finally erupted at the song’s climax. For David Gilmour, it must be incredible to stand upon a stage at a venue that is as world famous as he is and have thousands of people sing every word of his song in unison with him especially after being banned from the venue early on in his career. 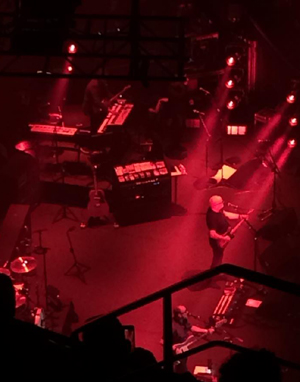 The lighting throughout the evening was aptly orchestrated, with most of the focus rightly positioned on the man himself. The first few tracks had Gilmour placed in a white, then singular pink spotlight, reminiscent of his former band’s name. Then during the meticulous performance of Floyd’s Money which, again, could have been lifted directly off the record, golden light illuminated the stage making it look like we, the audience, were transported to Tolkien’s Lonely Mountain, surrounded by gold. Although this may seem very basic, the overall experience was enhanced by the visuals created on stage, something Gilmour’s former band have always been famous for; I surely don’t have to mention The Wall… A refreshing track to hear performed live was the eloquently played The Blue from Gilmour’s third solo album, On An Island, where logically the stage was bathed in a pale-blue light not so dissimilar to the cover of the album from which it is taken.

As a man from the Wirral, it was quite pleasant to be seated near two young chaps from Liverpool who were very friendly before the show, until the amount of beer that they had consumed meant that they began talking through much of A Boat Lies Waiting, a song that is practically a lament to the late Rick Wright and which deserves respect. Gilmour was joined by David Crosby and Graham Nash during the performance so it was a shame to have these two men reel off their favourite Pink Floyd song list to everyone nearby. Luckily they were told politely to lower their voices so as not to disrupt the evening further, until they started again and the lesson was hastily learnt with a short, sharp “shut-up” from a fellow audience member. I suppose they loved the music that much to talk about it with such passion, but that kind of thing you expect to hear when down at your local pub, not in the Royal Albert Hall when watching a legend. 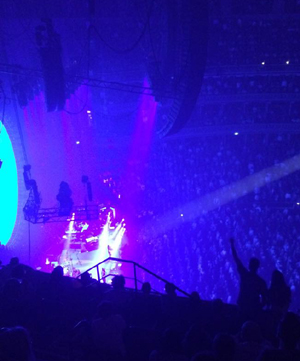 After a 15 minute interlude, Gilmour was precisely and rapidly bombarded in primary colours making him look like a visualisation of the five CD covers of the Live in Gdansk five-disc box set, all whilst performing the highly energetic Syd Barrett era Floyd classic Astronomy Domine which received determined applause from the audience. “Who makes your tea?” cried a fan between songs, “A guy called Steve, let’s all say a big thank you to Steve…” was Gilmour’s classy response whilst engulfed in further tremendous applause.

A couple of fans to my right had travelled from South Wales to watch the performance; armed with vintage Pink Floyd t-shirts, an incredible affection for the music and a very large hip flask enclosing a ten year old smuggled-in malt whiskey, they were completely awe struck and lost within the music – no doubt helped along by the whiskey, which this writer happily sampled when generously offered… it was a rock show after all! 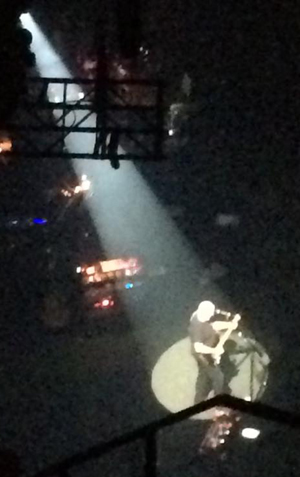 It is true that David Gilmour has surrounded himself with some fantastic musicians. A mention must go firstly to João De Macedo Mello who played impeccable sax throughout the evening, even having his own spotlight during his incredible and passionate solos. He will be performing at all five of the Royal Albert Hall shows in place of Theo Travis who performed saxophone duties early on in the tour. Mello nailed the Floyd tracks which was definitely important when surrounded by veteran Floyd fans. Bryan Chambers and Louise Clare Marshall provided some beautiful vocal harmonies throughout the show and when Clare was wished “Happy Birthday” by Gilmour the crowd took over the show and sang to one very happy looking female vocalist.

Aside from a surprising yet welcome performance of Fat Old Sun, if there was to be a track that felt slightly out of place during the night it may have been The Girl In The Yellow Dress due to the jazzy sound which was a complete u-turn in style after the epic Shine On You Crazy Diamond – but as a track all on its own, it stood out as a unique and pleasant piece of music. 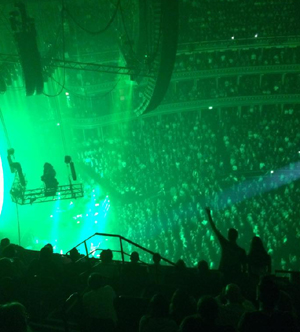 Today is another unique piece of music that was performed following The Girl in The Yellow Dress, but it fails to live up to the classic Floyd tracks in terms of momentum with the crowd and you could see a lot of people sit down during this one, possibly aware that the end of the show was approaching and they were saving their energy for the finale. They were right to do so for what was to come was worth preparing for.

When the band starting performing Run Like Hell, what I saw from the top left of the stage can only be compared to the visual in the film version of The Lord of the Rings’ The Return of the King where you see the Riders of Rohan preparing to embark to Gondor and you see one horse start to run to the left of the screen followed by a complete landslide of horses breaking after the first to follow. One audience member in the seated section on the main floor broke free and ran to the front of the stage and the entire floor ran “like hell” and followed, the rock fans of old had come forth and realised they were strong! This shows the timeless power that the music of Pink Floyd has over people. 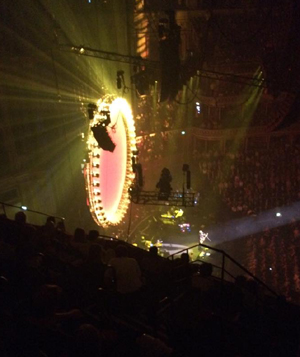 With an encore of three Floyd tracks to complete the night, and with more people running to the barriers to raise their fists in rapture Gilmour must have been delighted. The entire audience sang both Time and Comfortably Numb word for word whilst the ceiling shook and Mr Screen provided visuals and stunning lighting effects that spanned every crowd member.

“That was the closest thing to Pink Floyd you’ll ever see!” my friend and colleague Liam O’Brien said to me upon finding me after the show. He was right. This wasn’t a gig, it was an incredible life event, we as audience were all connected with beautiful music provided by one of the most renowned players on the planet. For myself alone, this performance was a once in a lifetime opportunity. If I never get to see David Gilmour play live again I would not feel sorrow for I went and I saw everything I could hope for and more at The Royal Albert Hall on 24th September 2015.