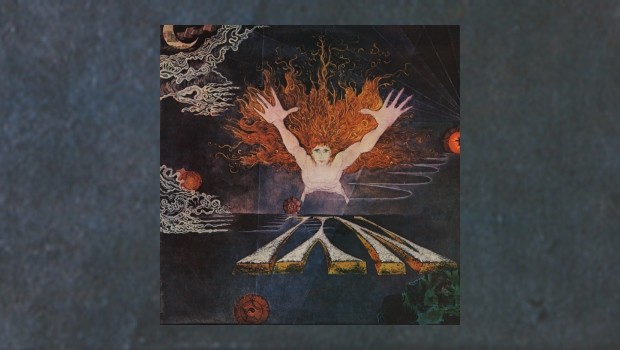 When you first enter the Psych Up Melodies website, the premier album on the homepage is the self-titled debut and sole record by the French psychedelic space outfit Nyl, originally released in 1976 on Urus Records. The artwork, as you can see above, is incredibly intriguing, pulling you right in and begging you to listen to the contents, promising a very enjoyable ride. Indeed, the first track is something quite special, an energetic jam in 5/4 with spacey overtones. It’s worth remarking that this is one of those unusual cases where the track name, album title and artist name are all identical. Eight minutes later, I’m fully primed to hear what else the band have to offer.

Unfortunately, that’s just about it. Nyl take an exceptionally misinformed turn with the dreary radio-unfriendly ballad Abery. I’m suddenly acutely aware of a band that haven’t a clearly defined direction, a problem which is made worse considering that the remaining handful of tracks are simply brief ideas of varying quality played sequentially. Even when the band are doing something right, they chop and change before I’m fully done appreciating the moment. It’s like the train-of-thought album of a hyperactive person.

An inconsistent mix of awkward spacey jams and terrible lyrical pieces, the problems are exacerbated by a lack of sound quality control. Worse still, I find out that the album order here is completely different to the original tracklisting (although they do put the best track first) and that Psych Up Melodies have completely lost one of the original album’s tracks, titled Blue Eyes.

All in all, this is a messy reissue of a messy album. The 37 minutes of bonus demo tracks would only redeem this release if it was worth worth listening to in the first place. This is a spacey trip that is rather in lieu of Apollo 13.