It’s a sobering thought to reflect that Transatlantic first formed in 1999, and such is the presence they have, it is hard to believe that Kaleidoscope is only their fourth studio album. Following Neal’s departure from the Prog scene in 2002, the band was put on ice before a reformation in 2009 and despite this, or perhaps because of it, they are as a popular as ever, helped no-doubt by the large fan base from their respective “day-job” bands.

For the one or two people reading this that may not know, Transatlantic consist of Neal Morse (lead vocals, keyboard, guitar), Mike Portnoy (drums, backing vocals), Roine Stolt (guitar, lead vocals) and Pete Trewavas (bass guitar, lead vocals), with occasional guest musicians; in the case of Kaleidoscope: Chris Carmichael (cello), Rich Mouser (pedal steel guitar on Beyond the Sun) and Daniel Gildenlöw (guest vocals on Written In Your Heart). 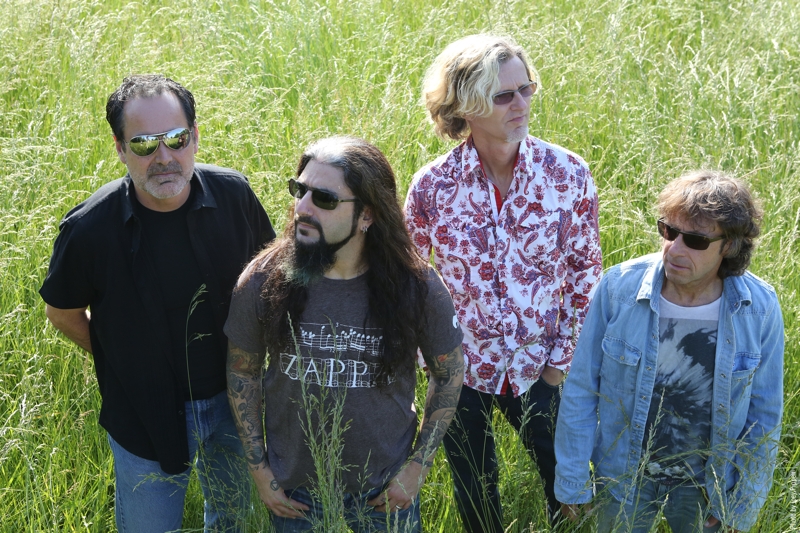 The Transatlantic sound is very well established and although one could claim it to be a mish-mash of the very individualistic styles of the members, it’s more fair to say that the whole is greater than the sum of its parts. With Neal and Roine being the two main writers there is a tendency to flip between the two throughout a song and it is usually clear who has written what, nevertheless the sections tend to complement and counterpoint one another; Morse’s somewhat uplifting, poppy, catchy, whereas Stolt these days has a definite darker streak to his compositions.

To this end there are little or no surprises on Kaleidoscope. The inevitable comparisons with The Flower Kings or Neal’s solo work (I was tempted to type Spock’s Beard, but it’s been over ten years now of course…) and to a lesser degree, Dream Theater, will abound. This isn’t to say the music is bad or boring though, actually quite the opposite, it’s perhaps the strongest Transatlantic album to date, which is quite a statement given the quality of the previous, especially the first release SMPT:e. Even on first listening though, Kaleidoscope feels so familiar that one could also accuse the band of “formula Prog”, surely we’ve heard this before? Well yes and no, or maybe. There’s no doubt that there is a template for these long format songs that Transatlantic seem to be able to churn-out on demand, but that didn’t stop Handel, Mozart, Beethoven and the other great composers over history hanging their compositions on the symphony or concerto frameworks; I don’t hear anyone complaining about them!

After their previous release, The Whirlwind, which was presented as a single track, albeit split into smaller prices, Kaleidoscope follows a more typical Transatlantic approach with a couple of shorter pieces sandwiched between two epics.

Split into five sub-sections, Into the Blue bears strong comparisons to All of the Above, although it’s clearly more of a band effort than the Morse-penned SMPT:e opener. Roine’s obviously played a big hand, especially in A New Beginning, where he also pulls-off a superb 2-minute guitar solo that is, to my opinion, one of the best I’ve heard in a long time: meandering above dark mellotron strings, full of technique and yet moody, suffused with feeling while the band slowly ramp it up to a bombastic climax, Portnoy and Trewavas combining as a really formidable rhythm section. Daniel Gildenlöw makes his small, but beautiful, vocal cameo during Written in Your Heart, he sounds so good it’s a shame he’s not more present on the album. From this point we reprise the main themes and gallop to the end of the track. It’s really typical Transatlantic and executed to perfection.

Shine is a typical Morse song with band elaboration – mostly harmless one would say and a nice interlude as we’ve heard on pervious albums with Roine playing another well-executed solo. Black as the Sky is an up-tempo Stolt composition where the synths come to prominence, driving bass and drums, a lot of fun with some typical timing quirks that these guys step through with ease.

Although listed as a separate track, Beyond the Sun actually, with it’s nice slide guitar from Richard Mouser and Chris Carmichael’s cello complementing Morse’s soulful vocals and piano beautiful, segues into the title track and as such acts as an indistinguishable prelude – leading to a 36-minute play time. Truth be told that Kaleidoscope does meander a bit and the first few times throughout the track leave the feeling that it’s been stitched together from disparate ideas and sections. Multiple plays ease this somewhat, but one is still left with the feeling that a bit of heavy editing would reap dividends by cutting out some of the solos that don’t really seem to add to the track – more to allow everyone to have a “bit of a go”, perhaps? Pete, whose bass work on this album is simply amazing, gets his chance to have a sing in his very distinctive falsetto in one part, as the track jumps about from section to section, style to style, before building to the necessary triumphant conclusion with an obligatory anthemic, resolving guitar line. You know it’s coming, maybe you can whistle the line before hearing it, but it’s so good when it’s there and a trademark of the Transatlantic style.

Of course, no Transatlantic release would be complete without the special edition and the accompanying cover versions. In the past they’ve been a bit obscure, but this time the band have thrown in some better known pieces, well ones I’ve actually heard of at least, so well worth the extra money IMO.

Despite some misgivings on the title track this is a tremendously strong album, I would argue their best to date and the opening track, Into the Blue is a masterpiece. All musicians are on the top of their game and the quality of the playing is both staggering and thankfully perfectly produced so you can hear it all. The big surprise to me is Pete Trewavas, whose bass work is of the highest quality. I’m not a Marillion fan myself and it never struck me that their recent output was so complex or technical, but Pete’s underpinning of the music with his deep, riffy lines forms a perfect counterfoil to Portnoy’s grooving mayhem. I have to say that it’s nice to hear Mike again, having lost track of him a bit since his departure from Dream Theater – really super drumming.

I’ve played this album a lot and look forward to every listen. It’s not only a must-have release for all fans of Transatlantic, Morse, Spock’s Beard, the Flower Kings, Dream Theater and Marillion, but also for those that may be new to the band or just curious in Progressive Rock as a whole.