Deep underneath the black shimmer of those northern Satanic mills the Regal Worm has turned a fixation with classic esoteric... Read More → 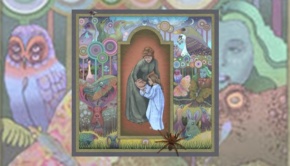