Now up to their fifth album, New Jersey art-rock band 3RDegree are a collective that take on heavy concepts without... Read More → 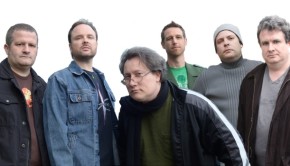