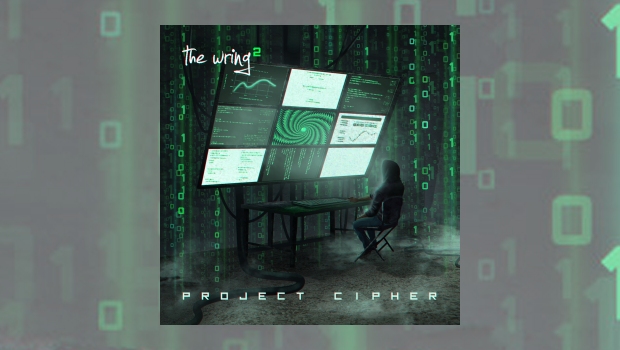 The Wring – The Wring2: Project Cipher

The Wring is the brainchild of guitarist and composer Don Dewulf from Ontario, and this album is the second release, as one might guess from the title! Don works at the metal end of the prog spectrum, and seems to have a penchant for writing riffs, but the chord structures and time signatures are unusual enough for this approach to work and remain interesting. Add to this the fact that Dewulf surrounds himself with some heavyweight musicians, and the result is really quite tasty. The overall sound is something like the heavier side of Rush, with hooks and melodic elements smoothing out the guitar crunch, making this very accessible.

The compositions are succinct, and at no point does the progressive streak running through the album get let off the lead to romp around at will. Dewulf has something to say, says it, and moves on, and that’s quite refreshing to be honest. Opening track The Light has Dewulf playing a riff that reminds me of the muscularity and power of Animals As Leaders, married with a more traditional vocal approach from Marc Bonilla (Keith Emerson band). This merging of complex riffing and a more melodic vocal structure provides the accessibility which is the hallmark of the album. On Sorceress, the dense layers of guitar riffage are driven along at pace by the nimble bass playing of Bryan Beller (Aristocrats, Joe Satriani) and crisp drumming of Thomas Lang (Robert Fripp, Peter Gabriel). Again Bonilla’s vocals give hand and foot holds on an otherwise smooth rock face. This is one of my favourite tracks here, and the sheer energy from the band is quite exhilarating.

Next up is the one instrumental, Cipher, which could easily be inspired by Rush’s YYZ, and like that classic, there is enough instrumental prowess and time changes to hold the attention despite the lack of vocals. Jason Henrie plays bass on this one, and is suitably dazzling. Hot on the heels of Cipher is Steelier, which is apparently so named as part of the chord structure has jazzy hints of Steely Dan according to Dewulf. Well, there is indeed a jazzy oddness about the composition, but really the link is pretty tenuous, and Dan this ain’t! It is a satisfyingly complex piece however, and has a great guitar solo, so I’ll let it go!

Elsewhere, we have the fairly straight ahead metal of Dissension, the loose jangly riff of Dose, and finally the Zeppelinesque Touch, which after its grand opening veers into Tool territory. In all, this is an enjoyable collection of songs from a guitarist who it seems can reel off a new riff at will, and maybe surprisingly, it doesn’t all sound like something you’ve heard dozens of times before. That has to be a result I’d say. Give it a listen, and if you like it, you might like to know that 3 is already well under way!